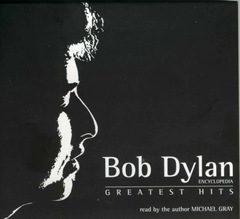 The Generalist is a big fan of the work of Michael Gray. You can hear a long interview with him on the Audio Generalist in which explains how he came to write the first ever critical study of Dylan’s work entitled ‘Song and Dance Man’, published originally in 1972, and talks at length about his truly excellent book on Blind Willie McTell [see Previous Post: Chasing the Blues].

He now has an audio disc of readings from his remarkable book ‘The Bob Dylan Encyclopaedia’, first published in 2006, now available in paperback. See the BDE Blog for updates. You can buy signed copies of his books and the audio disc from www.michaelgray.net

DYLAN TREASURES FROM THE GENERALIST ARCHIVE 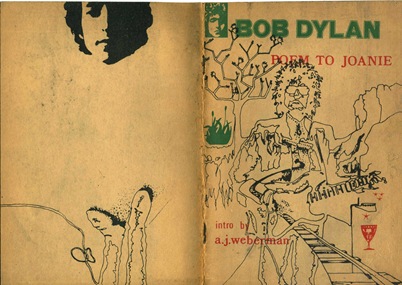 Published by Aloes Press in London by Jim Pennington (who did the printing and layout)  in either late 1971 or 1972. It was an edition of 300. The poem it contains was first printed as liner notes to ‘Joan Baez in Concert Part 2.It has an introduction by A.J. Weberman, the garbologist, dated 14 November 1971. It reads as follows: 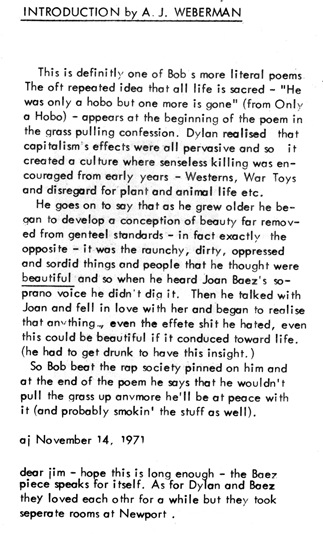 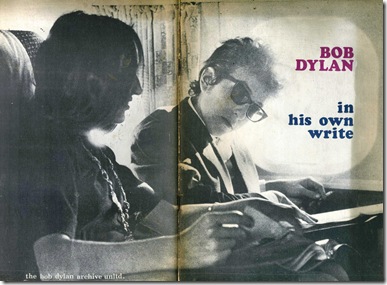 Undated with no publishing details except: ‘the bob dylan archive ultd’. written on the back cover. In form: a 48pp A5 booklet, staples with a card cover, printed on interspersed buff, blue and white paper with black and white photo sections. Subtitled ‘Personal sketches 1962-65’, it contains the following poems: 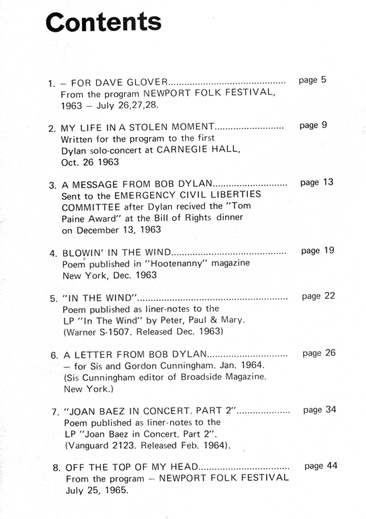 Any further information on these publications gratefully received. [Both are smoke-damaged, having survived a fire in my library back in the 1990s]

In the middle of preparing this post, discovered BOB DYLAN IS 70 on May 24th. via on excellent piece by John Harris, entitled ‘The Day I (Nearly) Met Bob Dylan’ in The Guardian.  Paper also contains review of Greil Marcus’ new book ‘Bob Dylan: Writings 1968-2010’ which doesn’t seem to be available on the web. Here’s a US interview with Marcus from the Speakeasy blog of the Wall Street Journal