THE GENERALIST was so fired up by watching the documentary ‘Crosstown Hurricane’ and Peter Whitehead’s film ‘Charlie is My Darlin’ on the Stones brief Irish tour in 1964 released for the first time – part of the mass media hoopla surrounding the Stones 50th Anniversary gigs – that I have decided to raid my own Archives and bring you some strange delights.

1967 began with Keef and Mick’s bust at Redland, subsequent trial and brief imprisonment. Less remembered is the fact that Brian Jones was busted with Stash in May that year and came to court on 30th Oct. This is the earliest Stones clipping I can find dated June 28th, published in the London Evening News. Copy reads: ‘Rolling Stone Brian Jones in his fur-collared dressing gown goes out on to the balcony of his South Kensington flat after police had broken in. Earlier the police had a dramatic message that the guitarist had been taken ill and an ambulance was called. The message was hoax. Now Brian is looking for another flat because of similar annoyances recently.’

‘BRIAN JONES, 26, lead guitarist with the Rolling Stones, has quit.

He said last night: ‘The music Mick Jagger and Keith Richard have been writing has progressed at a tangent as far as my own taste is.concerned.

'I have a desire to play my own brand of music rather than that of others, no matter how much I appreciate their musical concepts.'

Jones's decision came after a meeting between him and lead singer Jagger, 24, at Jones's home, Cotchford Farmhouse, at Hartfield, Sussex, former home of A. A. Milne, who wrote Winnie the Pooh there.

Jones, who recently bought the house for £3.1,000, said there had been the normal friendly meeting among the group and that they had agreed that an 'amicable termination of their music relationship, temporary or permanent, is the only answer.'

A few hours earlier Jones had denied a report that he had been sacked from the group or that he had quit.

He said: 'There is no row— everything is all right between us. It seems as though some­one is spreading a rumour around.'

But after meeting Jones, Jagger said: 'Brian wants to play music which is more his own rather than play ours. We have parted on the best of terms and I am sure we will continue to be the best of friends.'

Jones has been replaced by 5ft. 11 in. Mick Taylor, from Hatfield, Hertfordshire, who for he past two years has been lead guitarist with the John Mayall rhythm and blues group.

British audiences are expected to see the new-look Stones, who’re the country's top pop draw after the Beatles, at a concert next month.

July 2nd: BRIAN JONES FOUND DEAD AT THE BOTTOM OF HIS SWIMMING POOL 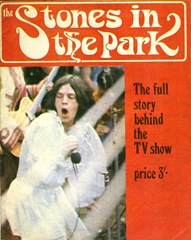 July 5th: Stones reorganise their pre-planned free Hyde Park concert in memory of Brian. Half a million people attend – including me 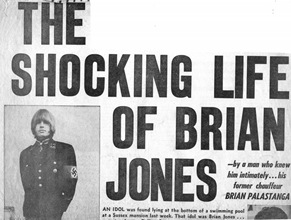 JULY 6th: The News of the World with their usual tact reported Brian Jones death the day after the concert. Article features this controversial photo of Brian captioned as follows: ‘Brian Jones in a mood of protest. He bought this S.S. uniform from a Munich costume dealer. Brian was a pacifist. The pose, jackbooted on a crumpled doll, was a symbolic gesture against war-time German atrocities.’

According to Brian Wyman, it was one of a set of pictures taken in 1966 in Munich in a photo session for  ‘A Degree of Murder’, a film directed by Walter Schlondorff and starring Anita Pallenberg which Brian wrote and produced the soundtrack for. Jones said of these pictures at the time: ‘These are going to be realistic pictures. The meaning is there is no sense in it.’ 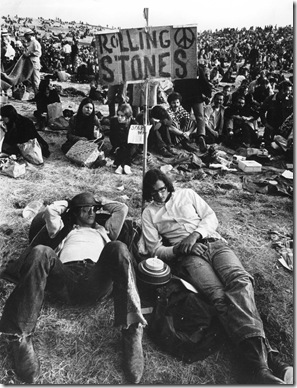 1969: ALTAMONT FESTIVAL. Photo: Bill Owens. This is one of a number of original Stones prints in the Archives. 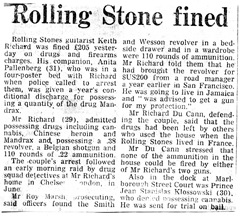 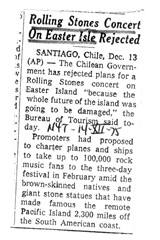 (Left): 1973: Account from The Guardian [25th October 1973] of Keef and Anita’s court case. [Right] A curio item from 1975 about Stones being refused permission  to stage concert on Easter Island. 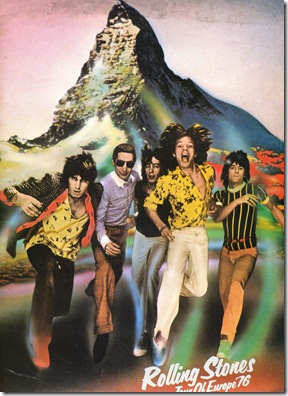 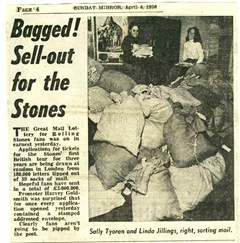 1976: UK and European Tour: April-June.         Top: Official programme for the tour. (Left) The Stones press office does its bit to raise publicity for the tour by announcing that Keef will marry Anita on-stage at Earl’s Court. Anita is carrying Marlon. [I My 1976] Tragically their 10-week old baby son Tara died on 18th June while the tour was still in progress. Anita and Keef never got married. [Right] Before the Internet the only way to get tickets was to apply by post. The promoter Harvey Goldsmith received 50 sacks of mail containing 100,000 letters according to this story [6h April 1976] 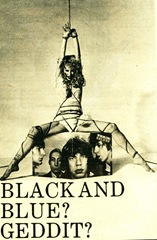 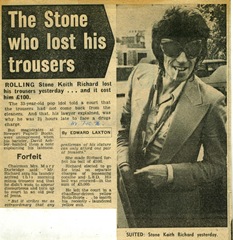 [Left} The NME reaction to US adverts for Stones new album [26th June 1976]. Caption reads: ‘They never get tired of all this S/M rubbish do they? [Right] Account of Keef’s court appearance on 6th Oct 1976 on further drug charges for possession of cocaine and LSD. He was fined £100 for being late to court due the fact that his suit came back from the laundry without trousers.