EDUARDO PAOLOZZI AT NEW WORLDS: SF and ART in the 1960s 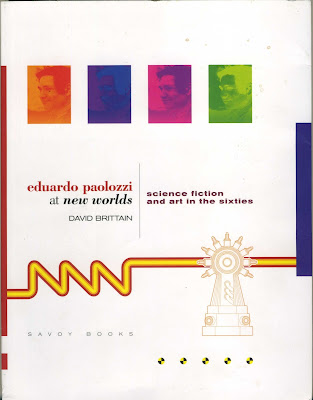 This valuable book, published by Savoy Books in 2013, arrived unexpectedly a week or so ago, a gift from the mastermind behind the project David Brittain, long-time friend who I'd lost touch with for much too many years. Amongst his other achievements David edited Creative Camera for a decade, worked on tv documentaries and is currently a Senior Lccturer at Manchester Metropolitan University. More  relevant is his fascination with the work of Eduardo Paolozzi (1924-2005), the Scottish sculptor and artist who is widely considered one of the pioneers of Pop Art. His earlier book 'Eduardo Paolozzi: The Jet Age Compendium. Paolozzi at Ambit 1967-1980' [reprinted by Four Corners Books in 2009] was followed by this second book, published the same year David was Guest Curator of 'Space Age Archaeology: Eduardo Paolozzi and Science Fiction' at the Scottish National Galleries of Modern Art [July-October 2013].

New Worlds was an important British science fiction magazine with a long and complex history. It began in 1936 as a fanzine called Novae Terrae, was renamed New Worlds  in 1939 when John Carnell became editor and was first published professionally in 1946 by Pendulum Publications, who produced three issues before going bankrupt the following year. As a result, a group of science fiction fans formed Nova Publications, who produced the first new issue of the mag in mid-1949 and published it monthly until Issue 20 (early 1953) when there was a hiatus caused by a change of printers. A year later, the magazine was acquired by McLaren & Sons, resumed a monthly publication schedule.

Then in 1964, it was acquired by Roberts & Vinter, who appointed Michael Moorcock as editor. When R&V had financial problems at the end of 1966, Moorcock was able to continue publishing the magazine independently - thanks to an Arts Council grant obtained by the SF writer Brian Aldiss -  until 1970 when New Worlds reached Issue 200 and Moorcock was no longer able to financially sustain it. It is this four-year period which is the focus of David Brittain's book. 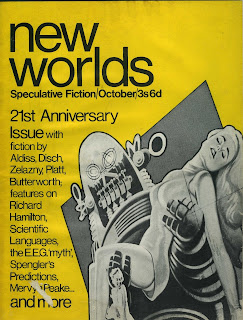 In pure SF terms, Moorcock's reign focused on the 'New Wave' of science fiction, which pushed boundaries and was open to experimentation. Of equal significance was the expansion of the format of the magazine, from a small paperback size to an A4 mag with bold graphic covers, thus providing opportunities for imaginative layouts and graphic design and a canvas for artwork, photography and illustration.

Moorcock's invention of Jerry Cornelius, a shape-shifting, counter-cultural, time-travelling character was featured along with J.G. Ballard's 'condensed novels' - both influenced by Burroughs' whose cut-ups pointed the way towards so much of the experimental fiction of the period. Many other important writers and artists found a showcase here. 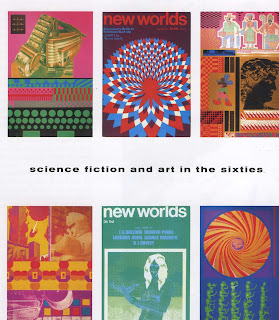 Both the Pop artists and the New World writers were interested in technology and how it was shaping the future, a future that seemed to have already arrived with the Space Age, computers, new media, global communication, alongside assassinations, civil unrest, the Vietnam War and rapid social change. All this proved fertile ground for writers and artist alike and the London scene provided opportunities for social and artistic collaborations and crossovers.

This book is a seminal work that connects a fizzing ecosystem of creativity and casts fresh light on the collage of concepts and ideas  that were captured in the New Worlds net. Rick Poynor  has done a first-class job in writing the book's intro essay and John Coulthart 's book design is imaginative and impeccable. He presents the wealth of visual material - a combination of many exciting Paolozzi prints and a wonderful cornucopia of  cover-shots and illustrations from the magazine - in an interesting and effective manner. David Brittain tops and tails the book, setting the scene and purpose up front and presenting interviews with many of the key characters at back, including  Christopher Finch the magazine's Art Director. In addition, there are several Appendices featuring extracts and essays by Moorcock, Ballard and Paolozzi. All in all, a time capsule which seems totally relevant to the present day.

FROM THE GENERALIST ARCHIVE 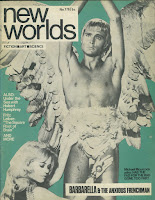 A few short words: Mike Moorcock refers briefly to the geographical proximity of New Worlds and Frendz, the underground paper I worked on with Jon Trux, who knew Moorcock very well and introduced me. Mike's memories of that time are slightly conflated. He says:

'We didn't share an office with Frendz. They were a few doors down in the same terrace. We shared typesetting machines and other equipment. They all sat round a big table bullshitting and getting stoned and somehow putting out an issue. Some were very good. Not all were readable. Red type on red paper was a famous decision. They were a commune at that time. some of them eventually broke away and became an efficient publishing outfit.'

Frendz was based at 305/307 Portobello Road just above the flyover. The paper closed at the end of 1972. That last year was when Hawkwind were regular visitors as was Barney Bubbles and Mike. They were all really kind to us younger guys and there was a real musical/graphic/textual crossover going on. Frendz was never a commune but yes, we were a ragtaggle crew, young, often stoned.

Two of my most visceral memories are sitting in the front seat of Hawkwind's big transit van next to Mike, after a gig in West London which also featured Mighty Baby, completely tripped out having been invited to take a swig from the bottle of orange juice in the dressing room which was spiked with the old LSD. Coming back into London with Mike at my side was a pure spaceship fantasy. On another occasion, the late and wonderful Robert Calvert brandishing a sword in Mike's front room. 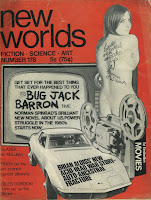 Sometime later, four of us moved to an office at 2 Blenheim Crescent where we produced 'An Index of Possibilities' and many other books and magazines. That's where the round table came in. We had an IBM typesetter and a large process camera.

Much later, in 1979, I met Mike in LA and we had a meal in a Mongolian restaurant. He slipped my name and Jon Trux's into his wonderful book 'Mother London'. Mike was always generous, a huge talent, and we admired him tremendously - still do.