What the Dormouse Said: Counter-Culture and Computing 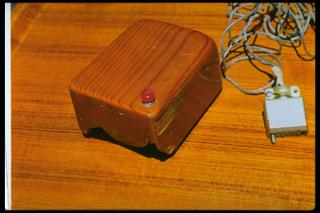 This image of the very first mouse, conceived by Doug Engelbart, taken from the chronological history on the site of The Bootstrap Institute, which continues to further his lifelong career goal of boosting individual and organizational ability to better address problems that are complex and urgent. More info and video clips of the work of Doug Engelbart and colleagues can be found at the Mouse Site.
The ubiquitous presence of personal computing and the Internet in our modern world is now so intense and pervasive that it will be hard for many to imagine a time when such tools didn’t exist.

There is of course a huge literature on the birth of computing but such is the dominance of figures like Bill Gates and Steven Jobs, young men who emerged at the beginning of the hobbyist era when the first kits to build your own computer were available, that perhaps most people believe this to be the true starting point of the modern world.

For those more deeply informed, the roots go back to Xerox’s legendary Palo Alto Research Centre in the early 1970s, from which came a computer called Alto - the forerunner of today’s desktops and portables.

In fact, as documented in ‘What the Dormouse Said ‘, a remarkable book by the New York Times science writer John Markoff [Viking Books. 2005], the roots of it all lie some ten to twenty years before that, in a California in which early computing labs and engineers were deeply intertwined and influenced by the ‘counter-culture’ activities swirling through American society at that time.

The book focuses on two government-funded labs – the Augumented Human Intellect Research Centre (later known as ARC) and the Stanford Intelligence Laboratory (SAIL) – the former driven by the visions of Doug Engelbart (best known for his invention of the ‘mouse’) who imagined augmenting human intelligence by giving people personal access to computers, the latter driven by the search for artificial intelligence.

At that time, computing meant giant mainframes, tended by teams of engineers and programmers, time-sharing these precious facilities, unable to readily communicate from machine to machine.

During this previously undocumented period, a network of far-sighted individuals began formulating the concept of personal computing alongside the development of ARPANET, which evolved into the Internet we know today.

It is well-known that in 1965 Intel founder Gordon Moore noted the phenomena now known as ‘Moore’s Law’ – the insight that the number of transistors on a chip would double every couple of years, that computing power would increase exponentially at an ever decreasing cost. In fact, says Markoff, this paradigm had been discovered at the beginning of the 1960s by an earlier group who recognised the profound economic implications of these technologies. [Check out also 'Moore's Law Is Dead, says Gordon Moore' by Manek Dubash at Techworld.}

The straight forward technical side of the story is gripping enough but perhaps of interest to a fairly technically-minded readership. What makes Markoff’s story of interest to the broader audience is how intrinsically this world was suffused with the social experimentation and political dissent of the time and the effect that this had on the direction the world of computing would take. For instance, open-source programming and software is just one fruit of this particular loom.

One of the, most surprising things is the pervasiveness of LSD. A very high proportion of the main characters in Markoff’s story were taking the drug in a highly structured and therapeutic manner, in order to help them visualise the kind of machines and inventions that would enable a new world of personal computing and connectivity to emerge.

Many were also involved in either the anti-war movement (the intensity of the Vietnam War was accelerating throughout this period) or spiritual and social experimentation (communal living, est).

One surprise of this narrative is the importance of Stewart Brand, best known as the originator of The Whole Earth Catalogue. Markoff writes: ‘Brand was the first outsider to catch a glimpse of this new cybernetic world and discern the parallels between mind expansion through the use of psychedelic drugs and through the new kinds of computing. ‘ He not only wrote the seminal article about the emerging computer scene for Rolling Stone in 1972 (‘Spacewar: Fanatic Life and Symbolic Death among the Computer Bums’) but also expanded this into the 1974 book ‘II Cybernetic Frontiers’ in which, says Markoff, ‘he became the first to popularise the term ‘personal computer.’ [See also 'The Epic Saga of The Well' ]

The theme of Markoff’s own book was prefigured by Brand in an article in Time magazine in 1995 entitled ‘We Owe It All to the Hippies’ in which he argued that ‘the counterculture’s scorn for authorised authority provided the philosophical foundations of not only the leaderless Internet but also the entire personal-computer revolution.’ (The other progenitor was a monograph by Theodore Roszak – ‘From Satori to Silicon Valley.’ [1986]. )

Doug Engelbart is a key figure in the narrative and this book certainly restores him to his proper eminence on the historical record. From the time he bizarrely first came across and read the extraordinary article – ‘As We May Think’ in Atlantic Monthly [July 1945] by Vannevar Bush while waiting to be demobbed, on an island in the Phillipines, in a little bamboo hut on stilts that served as a reading library for servicemen, he was hooked into a powerful new vision that he was to dedicate his life to.

Bush wrote: ‘Consider a future device for individual use, which is a sort of mechanised private file and library. It needs a name, and, to coin one at random, ‘Memex’ will do. A Memex is a device in which an individual stores all his books, records and communications, and which is mechanised so that it may be consulted with exceeding speed and flexibility. It is an enlarged and intimate supplement to his memory.’

Markoff’s book is a profound revisioning of the roots of our modern technological world, full of interesting and absorbing character studies and set against a landscape of turbulent dissent and mind-altering substances and concepts.

Interestingly, Markoff uses the term ‘hacker’ throughout this book in its old sense. You may not realise that the word dramatically changed its meaning in the early 1990s ‘when it came to refer to teenagers who used modems to hack into computers.’ The term, says Markoff, was originally applied to ‘a group of almost exclusively young men who were passionate in their obsession with computers and computing.’
Those were different days.
at 2:17 pm