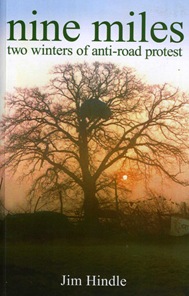 This post on the history of the UK road protest movement in Britain was triggered by a chance meet with Jim Hindle, who was good enough to supply a review copy of his excellent book ‘Nine Miles: Two winters of Anti-Road Protest’. This engaging and well-written first-hand account of Jim’s life in various protest camps takes the reader right inside the world of some of the treehouse-dwelling protest groups in the mid-1990s. 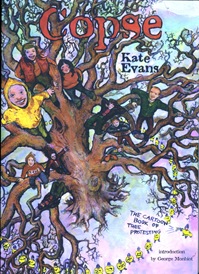 A book already lodged in The Generalist library is ‘Copse: The Cartoon Book of Tree Protesting’ written and illustrated by Kate Evans, which documents a number of the main road protests of the 1990s and includes a lot of practical information a ‘Beginner’s Guide to Tree-Protesting’. Packed with cartoons, comics and photos, with numerous first-hand accounts. Some second-hand copies available on the net but the book is currently out of print. Some material from the book is available on the Cartoon Kate site.

There is a useful basic history in Wikipedia: ‘Road Protests in the UK 1950-1979’. Britain’s first motorway was opened in 1958 and, at that time, all political parties were in favour of a substantial road building programme. The first wave of substantial protests against such schemes began in the 1970s; one of the most notable and successful was the fight to stop the London Ringways Scheme.

- ‘a series of four ring roads planned in the 1960s to circle London at various distances from the city centre. They were part of a comprehensive scheme developed by the Greater London Council to alleviate traffic congestion on the city's road system by providing high speed motorway-standard roads within the capital linking a series of radial roads taking traffic into and out of the city. Following the campaign by Homes before Roads, the scheme was cancelled in 1973 at which point only three sections had been constructed’

The movement really kicked off the the 1990s,

In 1989, the Government of Margaret Thatcher ] launched proposals for a trunk road enlargement programme, outlined in the Roads for Prosperity white paper [7] The stated aims of the proposals were to assist economic growth, improve the environment, and improve road safety.[8] The 10-year programme was estimated to cost of £23 billion (1989 prices),[9] with 2,700 miles (4,300 km) of new or improved road to the trunk road network and 150 new bypasses. 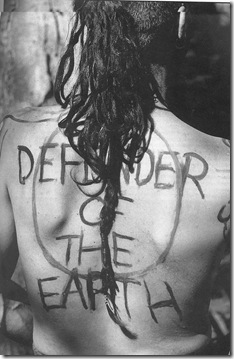 For current protests see : ‘List of Road Protests in the UK and Ireland.’

There’s a useful and thoughtful history of ‘UK Road Protest up to 1997’ at The Green Fuse, with much more detail of many of the key protests.

How do we measure the success of such a broad based campaign? Specific roads have been completed, but UK Government policy shifted considerably. In a memo allegedly leaked from the U.K. Dept. of Transport, Government civil servant Wenban-Smith admitted that the protests had been effective. Steven Norris, the Tory transport minister who approved the Newbury bypass, finally admitted that protesters were right to oppose the road building programme (Panorama, 17th March 1997). 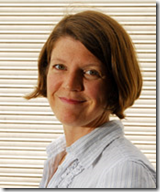 One of the key anti-road campaigners is Rebecca Lush Blum, who was one of the founders of Road Alert, a national networking site (now defunct) and www.roadblock.org now part of  the  Campaign for Better Transport

These two sources bring things up to date: