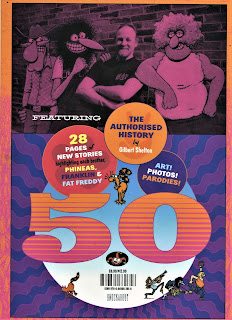 Almost certainly the best-selling  underground comics books in the world, The Fabulous Furry Freak Brothers are back and celebrating their 50th Anniversary. Conceived in Austin, Texas intially to promote a short film, now lost, the Freak Bros along with Fat Freddy's Cat have since amused and delighted generations of hippies, dope fiends and ne'er do wells with their wacky ways and adventures. This new compendium of fresh stories that highlight Phineas, Franklin' and Fat Freddy in turn, are accompanied by Parodies, a collection of posters, ephemera and  Official (ish) merchandise + the Authorised History by the man himself Gilbert Shelton. We learn, amongst other things, that the Brothers were inspired by the Marx Brothers and The Three Stooges. THE GENERALIST is hoping to bring you much more about Mr Shelton in the near future. Watch this space.

Knockabout Comics which has been run by Tony Bennett since the 1970s are now the sole English language publishers of the Freak Bros. According to Forbidden Planet International:

Knockabout Comics is a UK publisher of the finest underground and alternative comics. Founded in 1975 to publish Gilbert Shelton’s hippy-slacker masterwork The Fabulous Furry Freak Brothers, Knockabout has carried on publishing legendary comic talents such as Alan Moore, Hunt Emerson, Robert Crumb, Eddie Campbell, Brian Bolland, and many more, as well as translations of some of the best award-winning European creators.“Not only has Knockabout been instrumental in pioneering the market for challenging underground material, it has also been at the forefront of legal battles over censorship; it is probably no exaggeration to say that the increased leeway enjoyed in the medium today is thanks in no small part to the cases Knockabout has fought out with The Man so we could have the right to decide what we wanted to read for ourselves.”

Check out many of their recent titles at their distributors Turnaround.

'The Big Fix: Portugal's truce on drugs' by Susana Ferreira is an important story about a completely new take on tackling drug use and related health  and social problems. Published in The Guardian.

'Since it decriminalised all drugs in 2001, Portugal has seen dramatic drops in overdoses, HIV infection and drug-related crime. If this conservative country could do it, why hasn't the world followed.'

'When the drugs came, they hit all at once. It was the eighties, one in ten residents slipped into the deep of heroin addiction—bankers, university students, carpenters, socialites, miners—and Portugal fell into a panic.'
at 12:24 am No comments:

Back in the February before last THE GENERALIST published a detailed post entitled:
VIRTUAL REALITY IS GOING BIG IN 2016
It began:

'This story of 'virtual reality' (VR) should perhaps start with the man who is credited with coining the term - Jaron Lanier. In the 80s/90s, he became the spokesman/ philosopher/ poster boy of the VR movement,

*
Now aged 57, comes the publication of his book 'Dawn of the New Everything', an autobiographical trip through his life, work and thought streams. It's a multi-dimensional package, containing the story of his extraordinary early years, the early hacker/entrepeneur scene in Silicon Valley, his own development of VR and the technology and thinking behind it. From the current day perspective he looks back on the process whereby the utopian visions of the digital world were taken over by corporate interests. There are numerous levels of text and fonts, footnotes, appendices, essays and critiques.

He believes strongly in the value of VR and emphasises the fact that the technology is still in its teens if not its infancy but has already found several valuable real-life applications. He told Tim Adams, in a phone interview for The Observer: 'With virtual reality, I think there are cases where  it has already demonstrated its value, in treating post-traumatic stress, for example, or helping people overcome addictions. I think it will  eventually become a proper medium of art and culture but you can't put a schedule on that.'

These days Lanier has an innovation lab at Microsoft and and has become a prominent critic of the way social media and digital technology has shaped our society. 'The priority was always clear to me. Virtual worlds can be a part of real life, but this notion that they could be on an equal footing is abhorrent.'

The full humanity of Jaron Lanier's personality shines through in this fascinating book which will inspire new generations of innovators and create a valuable debate about the future direction of the digital world.
*

Jaron Lanier grew up in the westernmost corner of Texas, outside El Paso at the juncture of New Mexico and Mexico proper (where he went to school). His mother Lilly was born to a Jewish family in Vienna. She was very light skinned and blond and talked her way out of a 'pop-up concentration camp' and rescued her father from captivity. Most of her family were murdered by the Nazis. His father Ellery's family were mostly wiped out in Ukranian pogroms. They were both in the car the day it flipped out of control on their journey home after his mum had just passed her driving test. Lilly died and his father was severely injured. He recovered but Jaron was traumatised, contracted a number of near fatal infectious diseases, and spent a year immobile in the same hospital.

His mother had been the breadwinner of the family - trading stocks on the New York Exchange. When she died, Ellery managed to get certified as an elementary school teacher.

Ellery's father was an architect and his son studied architecture and joined his business building skyscrapers. He also had a job designing window displays at Macy's.  Both parents were painters. Ellery also had a mystical bent, having lived with both the mystic spiritual teacher Gurdjieff in Paris and Aldous Huxley in California as well as studying with Hindu and Buddhist teachers. In the 1950s, he wrote columns for some of the leading science fiction pulp magazines and hung out in the SF social circle in New York

His parents had bought a house, which was under construction but, while Jaron was in hospital, it was completed but then burned down the following day. They were unable to retrieve the money his mother invested in the project. Ellery managed to buy an acre of 'throwaway land' in New Mexico and, for the next two years or more, they lived in tents.

Amongst their neighbours were scientists and engineers who worked at the White Sands Missile Range. Clyde Tombaugh, who discovered the planet Pluto taught Janier how to grind lenses and mirrors and let him use his mazing backyard telescopes.

The border region was  crawling with spiritualists. Lanier writes they were 'living next to the largest missile test-range in the world so peculiar debris fell from the sky all the time'. Kids at his school at 'show and tell' time would bring in what they claimed were bits of alien spacecraft.

In his early teens his father came up with a big plan. He told Jaron he would let him design their new house which they would build together. It consisted of one large and one medium sized geodesic domes connected by a passageway and augmented with two nine-sided pyramids and two 20-sided icosahedrons. When Jaron moved out, his father stayed there for a further 30 years. 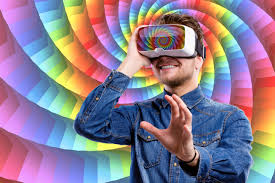 The question he says he was asked more than any other in the early 1980s was how VR and LSD are related. He writes: 'VR is sometime compared to LSD, but VR users can share a world objectively, even if its fantastical,  while LSD users cannot.' This is the opening sentence of the book's 23rd VR definition. He tells us that 'LSD was common in tech circles. Steve Jobs would go on and on about it'.

Is this man on drugs? Lanier writes: 'I used to come under tremendous social pressure to use drugs, LSD especially, and pot at the very least. As it happens I have never tried them, not even marijuana. It was burdensome to constantly have to constantly explain myself. My choice was taken as an affront. My intuition is that drugs weren't for me. Simple. Am not judging anyone else. The recent pressures one feels to  join social networks feel similar. My answer is the same'

Timothy Leary was keen on VR and his nickname for Lanier was "the control group". Lanier says Leary became a great friend 'with whom I disagreed'.

'Once I found myself speaking at a conference in Spain where Albert Hoffman, LSD's invetor, also spoke. He came up to me and said: "You have inherited Tim." A sly glance. I was speechless.'

Lanier was also fond of Sasha Shulgin, the astonishing chemist who invented and tried  hundreds of new psychedelics.

[For more on this topic see Previous Post: What The Dormouse Said: Counter-Culture and Computing August 28th 2005] 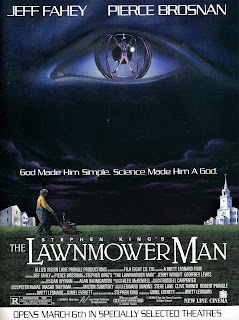 'The Lawonmower Man'  was a science fiction film that used real VPL gear as props. It was about a VR company being taklen over by a shadowy conspiracy. Pierec Brosnan played, approximately, me.

'The movie started out as an adaptation of a Stephen King novel but ended up as a tale of intrigue that was inspired by what might have been the truth about VPL [according to director Bret Leonard.] I don't really know how true it was, to this day.'

Lanier describes 'a personal eccentricity that blossomed in me once I had my own house in Silicon Valley, I call it "organomania", a need to always be learning to play a new musical instrument.' He started with just a  shakuhachi, clarinet and zither and rented a little upright piano.

'Organomania is apparently incurable. Today there are well over a thousand instrumnent in our home, maybe two thousand, and I have learned to play each one  at least well enough to enjoy.' He says that
in order to play these instruments you have to adopt the same body postures as the original musicians who played them many centuries before thus creating a connection through time.


'As a musician, Lanier has been active in the world of new classical music since the late 1970s. He is a pianist and a specialist in many non-western musical instruments, especially the wind and string instruments of Asia. He maintains one of the largest and most varied collections of actively played rare instruments in the world. Lanier has performed with artists as diverse as Philip Glass, Ornette Coleman, George Clinton, Vernon Reid, Terry Riley, Duncan Sheik, Pauline Oliveros, and Stanley Jordan. Recording projects include his acoustic techno duet with Sean Lennon and an album of duets with flautist Robert Dick. Lanier also writes chamber and orchestral music.'
Extract from Wikipedia Profile of Jaron Lanier
*
VIRTUAL REALITY


Lanier writes that 'VR was actually birthed by a long parade of scientists and entrepeneurs. One of he most important was Ivan Sutherland who started up the whole field of computer graphics. In 1965 he proposed a head mounted display and in 1969 built one.

'There is not one single detail of the story of VR that doesn't involve a priority dispute'.

'It is often said that I coined the term "virtual reality"...There's a wonderful argument that I did not. Before World War  II, the radical dramatist Antonin Artuad used the French phrase réalité virtuelle.
Lanier also references Susanne Langer who came up with the phrase "virtual world" in the 1950s.

'I wish I could remember the precise moment when I started using the term "virtual reality".  It was in the 1970s before I came to Silicon Valley and it served as both my North Star and my fledgling calling card.'

Lanier and friends established the first VR start-up, VPL Research Inc. in 1984. He left it in 1992.

In one memorable afternoon he gave demos with his first VR headsets to Terry Gilliam, the Dalai Lama and Leonard Bernstein.