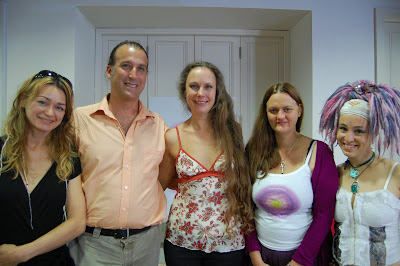 From Left: Pashet (one of the main artists exhibiting at the Festival), Mark A. Michaels and Patricia Johnson, Bernadette Vallely and Kwalilox (cyber burlesque fairy). The Kensington Rooms, London. 25th July 2008.
On July 25th, The Generalist was invited to attend the press launch of the London Festival of Tantra, which will be held at Chelsea Town Hall in London on September 27th this year.

This multi-layered one-day event will feature a range of speakers, workshops and rituals plus artwork, music and dance, massage and body painting. It has been organised by Bernadette Vallely, author of 'Sacred Sex,' and will bring together a broad range of people working within the tantra scene.

What follows is a layman's (possibly mistaken) first thoughts on the subject.

Tantra is an ancient branch of Hinduism, a part of which addresses itself to a sacred approach to sexuality. It is this part that is generally presented in the West. 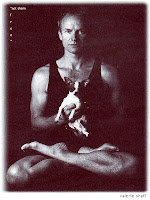 Just to clear the air: the most famous tantra expert as far as the mass media is concerned is Sting which stems from his remarks years back about how he and Trudie could have sex for six hours using tantric techniques. Here's one quote on the subject: ''The Police singer insists his marathon, mystical sex sessions are not as intense as reports have suggested, and claims most of the time is spent cajoling, eating and watching a film. Sting said in an interview, "Yes, you can have sex for six hours, but it includes dinner, a movie and maybe a lot of begging! Tantra is a well-documented science, it's not just about sex. It's a devotional exercise to express adoration. Sex is a sacred act and incredible fun." [Source: ExpoSay]

It is easy, in this climate, to understand the continuing attraction of Tantra, which offers not only a sacred dimension to sexuality but also practical techniques designed to help you achieve amore intense loving experience - a gateway to the higher thoughts that form the bulk of Tantric teaching. 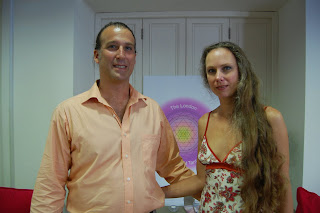 'Tantra is an ancient South Asia tradition that recognises sexual energy (not necessarily sexual activity) as a source of personal and spiritual empowerment. It is a pragmatic, non-materialistic technology of mind and body, a practical way to loosen the bonds of unconscious, habitual behaviour and thereby live more freely and fully.'
- Michaels & Johnson

Like many of you no doubt, I have a high intolerance of new age speak and psychobabble, so it was a refreshing and rewarding experience to meet this couple who speak simply, openly and sensibly about their ideas, approches and beliefs without pretension. We also discovered a mutual interest in the Beats.

In the States, it seems, Tantra is still slightly underground in the current climate, in a society where zoning laws are invoked to stop people living together in communes, and professionals
risk losing their jobs and reputations if they participate in any kind of sexual activity that is not mainstream - or worse, custody of their children. In Texas, if you own more than six sex toys, you can be charged with possession with intent to supply.

They call themselves 'pleasure activists' (which is a nice turn of phrase that could catch on and almost certainly will) and hold salons for others of the same mind in New York on a regular basis.

They are both musicians: Mark was heavily into punk rock, the first band he saw being Talking Heads at CBGBs, and was in London during the height of punk in the late 1970s, seeing Siouxie and the Banshees, the Adverts and many others and was in a punk band himself called The Relaxors. He subsequently became a lawyer, holds a master's degree from New York and Yale, and is a playwright and translator.

Patricia is an opera singer who has toured throught the US and Europe and perforrmed with the New York City Opera and many other companies. She tells me that much of her musical training and intelligence anticipated what she was to learn from tantra, or provided at least a grand preparation for same. 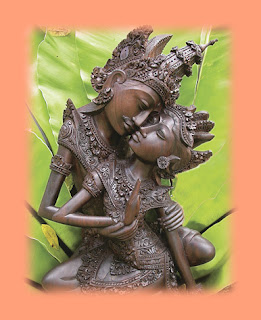 Both are students of the Australian Dr Jonn Mumford, a Tantric pioneer in the West, now known as Swami Anandakapila Saraswati, who in his Afterword to their 'Essence' book writes that 'the crux of Hindu Tantra in regard to sexuality may be summed up from this simple phrase from the English marriage ceremony in the 'Book of Common Prayer: "With my body I thee worship." Nothing more and nothing less!'

Mark subsequently sent me a post from the couple's Tantra PM blog entitled 'Punk Tantra' which reads as follows:

Punk Tantra may seem like an oxymoron to some, but my Tantric sensibility was shaped by my involvement in Punk. Just as we started getting active on myspace, I received a couple of CDs of material my first college band, The Relaxors, recorded in 1978 or '79 in Ann Arbor and learned that our old manager had set up a page for the band. When the package arrived I had already added a few of my favorite groups to our friends list. It was an odd synchronicity, and it encouraged me not only to revist my roots but also to dig through my archives. Some of the material I find may show up on the Relaxors page in the near future.

Patti Smith's Bottom Line show in December of 1975 was a life-changing experience for me. I'd seen plenty of rock bands by that time but had never experienced something of such transcendent power. About a month later I ventured into CBGBs, where Television and Talking Heads were on the bill. I knew I had found a home. This was before the crowds there got huge, and before Punk got codified, either as fashion or as a sonic style. Back then the scene was diverse, tolerant and accepting. I had the sense that we were all outsiders seeking freedom from received social norms -- whether musical, social or political. We were seeking intense experience, or as Patti Smith put it: 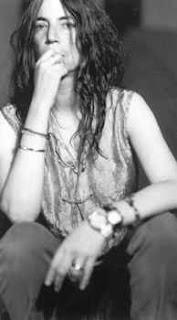 "I seek pleasure. I seek the nerves under your skin. The narrow archway; the layers; the scroll of ancient letters. We worship the flaw, the belly, the belly, the mole on the belly of an exquisite whore. He spared the child and spoiled the rod. I have not sold myself to God."

Anyway, Tantra. It's really the same thing. No need to sell yourself to God when you can find God inside yourself, but I digress. Contrary to popular myth, Tantra's got very little to do with sexual technique, and it's certainly not all new-age sweetness and light. It's about finding the divine through experience, wherever you are, including in the gutter. And those transcendent moments in the dirty dank and sweaty rock 'n' roll clubs in New York, Detroit and Ann Arbor were truly Tantric. The ego dissolved, and I became one with the sound.'
at 1:45 pm No comments: 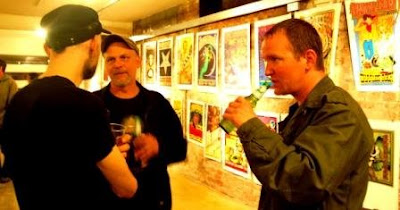 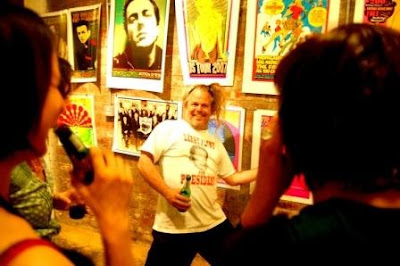 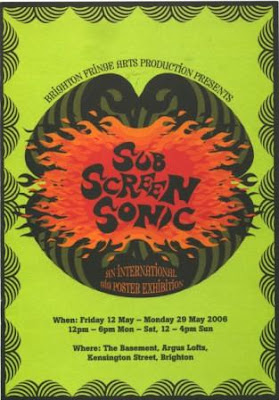 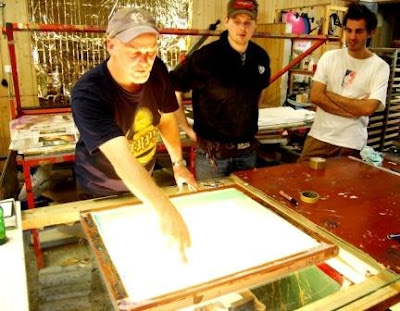 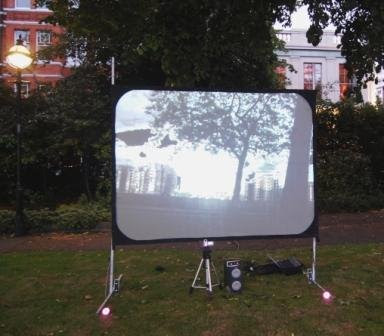 The 'Statues Alive' event, featuring a series of light projections and sound effects by Quadratura, was staged at the Chelsea Embankment, London on the evening of the 23rd June 2008.

Shown below are five light installations, projected on a beautiful bronze boy and dolphin statue, a monument to Dante Gabriel Rossetti, a bronze female nude, an Epstein, and a statue of the painter Whistler. 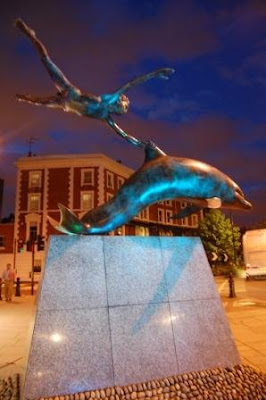 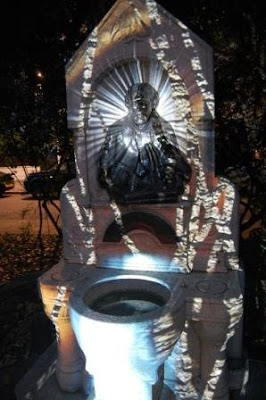 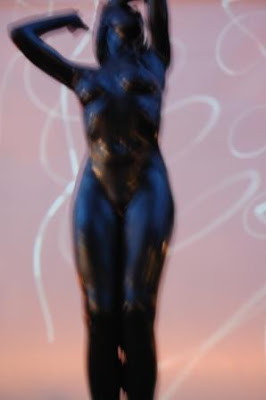 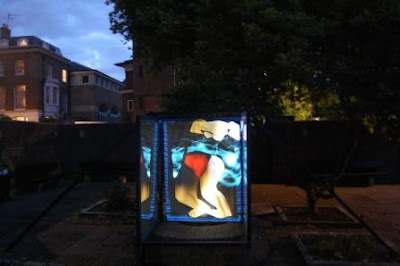 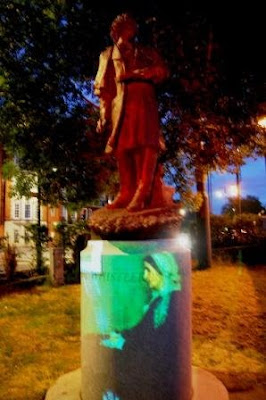 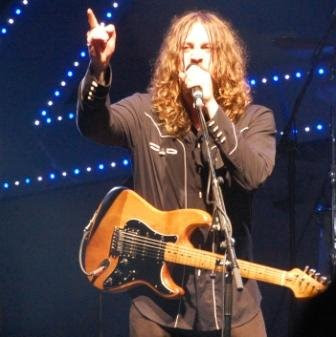 This summer have been totally focused on learning how to photograph music. Trying to find a fresh approach, to capture the mood of the music and the interactions between musicians on stage. Using a Nikon D40.

From the top: Dave McCabe of The Zutons and Eddi Reader (performing with the Jools Holland Rhythm & Blues Orchestra) at Bedgebury Pinetum; Jomo James and His Boogie Chillum Band at The Brunswick in Hove plus DJ Ras Ric at the Lansdown Arms; Tongue & Groove at an open air gig at the Pells Pool; the blues rock whirlwind that is the brilliant Bex Marshall at the Constitutional Club - all in Lewes 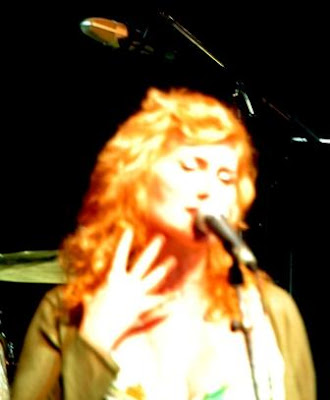 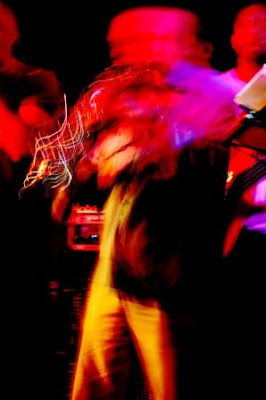 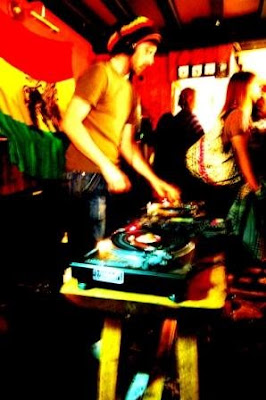 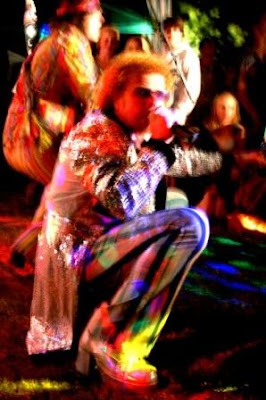 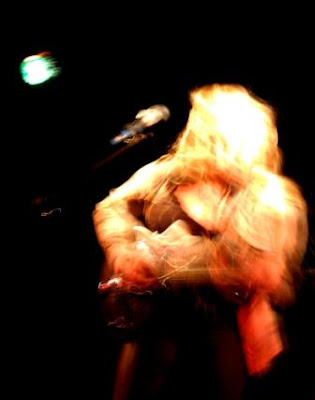