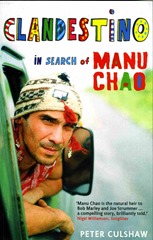 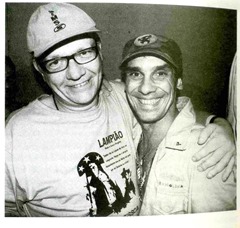 It a sense Chao and Culshaw were twins separated at birth. Both will admit to being addicted to travel.

Culshaw was dubbed by Malcolm McLaren ‘the Indiana Jones of world music.’

THE GENERALIST has known Culshaw since the late ‘70s when he was living in a well-organised squat just up the road from the Grays Inn Road office of Harold Evans’ Sunday Times. Around the same time he was editing the alternative technology magazine Undercurrents. His interest and understanding of alt politics remains intact. Between then and now he has circled the globe meeting and interviewing scores of the world’s most important musicians, usually in their home territory. A composer and musician himself, he has an encyclopaedic knowledge of what has become known as ‘world music’ and writes about it with passion, brio, understanding and humour.

Chao disappeared for years after the break-up of his band ‘Mano Negra’ and roamed the favelas of Rio, Mexico and Africa – during which the tunes, sounds and passions he found there wove their way into Clandestino – Manu’s album that slowly slowly, transmitted by travellers, sold millions and turned him into a global figure in the South – bearing comparison to Marley and Strummer. A man who spoke for the dispossessed, for the anti-globalists; whose heart and politics came from the right place.

Culshaw first set out to meet Chao in 2001 and has been chasing him ever since. They met in Brazil, Senegal, Barcelona, Paris and other places I can’t recall. This work has been at least a five-year labour of love - fraught and freighted with problems and professional difficulties. The result is a substantial and intelligent multi-level narrative that sweeps the reader through time and space, following this most mercurial of musicians through all his many moods, locations and beliefs.

We begin in Paris where Manu was born in 1961 to Spanish parents (one Galician, one Basque). His father was a journalist and the house was full of culture and cultural exiles – including Gabriel Garcia Marquez who said memorably  ‘He was a pain in the neck when he was four – and still is!’

Manu and family lived outside the Périphérique and it is here that he started playing rock ‘n’ roll, then rockabilly and punk. He idolised Dr Feelgood, hung out in squats and founded a band called Mano Negra who became the biggest band in the history of French rock before disintegrating after a four-month boat trip around Latin America and a risky rail journey through the Colombian narco-war countryside.

Devastated and adrift, Manu went missing in action for three years. He began experimenting with peyote, had a mystical encounter with a white cow and roamed, never staying in one place for more than two weeks.

There is no respite in the book’s Part 2: In Search of Manu. Culshaw, intrepid reporter, meets him in Barcelona (a home base), New York, Buenos Aires (where Manu organises musical events inside a mental institution), a refugee camp in the Sahara, in Mexico (the chapter is called ‘Machetes, Mariarchi and Meths’) Brixton Babylon (where Manu met Strummer), Brazil with the Goddess and a final encounter. An atmospheric final posting from Finisterre, the land of Manu’s roots, strikes a spiritual note.

This is a great tale told with a genuine enthusiasm, relish, insight and – I would say – broadness of vision. Culshaw is equally at home explaining the complicated lineage of Brazilian street music as he is exploring the philosophy and actions of the Zapatista.This is Pete’s first book which I hope very much will be soon followed by many others.

It is also worth noting that the book itself is a satisfying piece of design and production with its fold-out cover flaps and solid binding. I also like the fact the fine black and white images in the book are peppered throughout rather than trapped in a central section

‘Clandestino’ is, like the album of the same name, a book that will grow through word of mouth and will, I believe, find a ready audience who will consider this a seminal work.

‘Clandestino: In Search of Manu Chao’ by Peter Culshaw is published by Serpent’s Tail

SEE ALSO: You can read much more of Pete Culshaw’s excellent journalism on the website of The Arts Desk, of which he is one of the founding editors.

FROM THE ARCHIVE: Article about Pete and Undercurrents magazine by Andrew Tyler in the NME in Nov 1981.