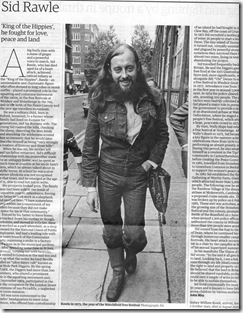 This is my obituary of Sid Rawle, published in The Guardian  on 27th September.

Full text can be read here:

Important correction re Sid’s mother received from a member of Sid’s family:

‘Sid's mother was not a Romany girl as you have reported. Our mother was a born and bred London girl, from Parsons Green, Fulham, as was our grandmother and great-grandmother. I was born eight years after Sid in the same house in Fulham -four generations of London girls. Betty, our mother, met and married Sid's father whilst working on his farm as a Land-Army girl.  When Sid was seven the marriage failed and she returned to London with him.  However, after a protracted custody battle, Sid was handed back to his father on the Exmore Farm.  It was deemed better, by the powers that be, for him to be brought up on an Exmore farm than in post-war London.  He was not brought up as a solitary child, he had three step-brothers.  Sid didn't see our mother again from the age of nine to eighteen when he tracked us down in Slough.  The rest, as they say, is history...’

See the excellent tribute to Sid on Andy Worthington’s site. 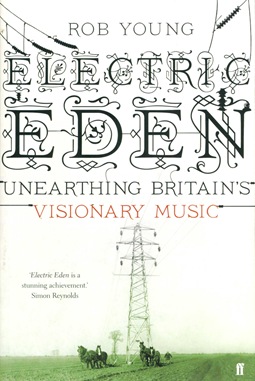 This 600p tub-thumper of a book traces a silver chain of inspiration - a vision of Albion, a lost Eden, the sacred countryside and the antiquarian past – and follows its manifestations over the last100 years.

We travel down wandering roads with the first folk-song collectors and classical composers inspired to incorporate folk themes and melodies in their work, through the modern folk revivals, the electrification and modernisation of folk, the punk and pagan expressions of folk, to modern visionary musicians who the author considers are linked to Albion’s silver dreams.

The book begins by following the long journey of Vashti Bunyan - her travels and travails  - as she treks the length and breadth of Britain in the 60s/70s trying to establish herself as a singer and recording artist. On her way she meets Donovan, McCartney, Joe Boyd, Nick Drake and the Incredible String Band but has limited success. Then in the 2000's, her music is rediscovered by Devendra Barhhart, makes and achieves the cult success she always craved.

We then flash back in time to the turn of the century when, says Young:

‘the concept of British music was a primordial soup waiting for an electric spark. Its twentieth-century reanimation flows directly from this concentration of radical politics, speculative utopianism and rural conservationism, all supported by a coterie of powerful national figures who shared…’the passion of the past”.

After the war came the Celtic Twilight movement, Yeats’ Brotherhood and the first Glastonbury Festival (1914-1927) held annually in the Assembly Hall. The time of John Ireland, Arthur Machen and the Golden Dawn. I don’t think I realised that the Piper At The Gates of Dawn was the title of a hallucinatory chapter in ‘The Wind and the Willows’ composed at this time.

Folk son and dance become more organised and established. Between the end of the war and 1958 came the second ‘folk revival’ in London led by Ewan McColl, Peggy Seeger, folk historian A.L. Lloyd and folklorist Alan Lomax and the lesser-known broadcaster Peter Kennedy. Young writes that: ‘Their efforts transformed the role of folk music in contemporary life, colonising as many spaces as possible, from the smallest back-room folk club to the potentially massive reach of radio and television, and introducing a contemporary industrial sensibility to the corpus of folk.’

All of which is very much the curtain raiser to the perhaps better known period which leads onwards from the Soho folk clubs where Steve Benbow & Davy Graham, later Jansch & Renbourn and countless others, made their debuts . What I didn’t realise was that, according to Young, the guitar was an instrument ‘practically unknown’ until the late 1950s, early 60s. Spanish guitars were only available on import and other models were impossible to buy.

The trail continues with the Copper Family, the Watersons, the Young Tradition and the Early Music movement and Shirley & Dolly Collins. Young reports that there were 30 or 40 folk clubs bin 1964 and 400 by the end of the decade. Then comes Pentangle and Astral Weeks – the modernisation of folk – and of course Nick Drake, who once had tea with the 90-year old E.M. Forster in Cambridge  - and the wonderful Incredible String Band (who I fell in love with again after reading this book). Jimmy Page says he just bought and ISB album and followed the directions.

Later still we are into the ‘lingering pagan presence in the British landscape’ and the technologically-evolved folk music of the Beatles. The time of Middle Earth, Gandalf’s Garden, Lord of the Rings, T-Rex and early Bowie.

Festivals are documented and celebrated, the birth and end of folk rock, the punk connections through Crass. A negative view of folk emerged from the mid 70s, says Young and, as result, ‘folk music made little impact on national consciousness in the 1980s’ but he highlights the work of Kate Bush, Julian Cope, David Sylvain and Talk Talk for keeping the vision of British music alive. He talks of our ‘folk’ music finding its place within ‘world music’. [When I met Show of Hands they said they played world music from Devon]

Young has a digressive style that is always seeking unexpected connections and which suits his wandering subject. The material is highly detailed yet the author manages to carry the reader along, maintain a good momentum in this long journey  through the roots of British music. His imaginative ‘readings’ of  recordings, snatches of first-person memories, biographical sketches and historical narrative are woven together skilfully. The book is  a substantial achievement and a valuable work of reference.

‘Electric Eden is by no means the first book to trace the modern reinvention of folk music. A farrago of essays called The Electric Muse, originally published in 1975 to accompany a triple-LP set, was the standard text in its day, but several comprehensive studies have been published since the millennium. Britta Sweers's 2005 overview, Electric Folk: The Changing Face of Traditional Music, features valuable interviews and is pitched at a reader with no prior knowledge (dutifully explaining who Bob Dylan is), but it shows its origins as a young German's university dissertation. Michael Brocken's The British Folk Revival 1944–2002, which focuses more on the mainstream and politics than Young's tome, would suit readers who wish to study the "movement" rather than have their tastes expanded.’

‘Electric Eden …is, at heart: the best of the currently available books on the modern British folk phenomenon. Despite its biases and digressions, it is a thoroughly enjoyable read and likely to remain the best-written overview for a long time.’

‘There exists a parallel universe in which I am happily giving Electric Eden an absolute rave. This, I say, is a perfectly timed, perfectly pitched alternative history of English folk music. It is wide-ranging, insightful, authoritative, thoroughly entertaining. I may even go so far as to say that, in parts, it is electrifying. There is another parallel universe, however, in which I come over all Cambridge philosophy tutor, sigh woefully, wave the weighty tome around and say, "In­sufficiently rigorous, self-contradictory, partial and - worst of all - lacking a central thesis."

Julian Cope article by Rob Young in The Wire

Shirley Collins: Over the Water & Over the Road