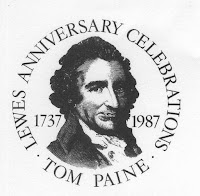 THE GENERALIST has been absorbed for the last six weeks or so due to research and preparations for a significant event in Tom Paine's connection with Lewes - the 30th Anniversary of the revived Headstrong Club. This debating (or arguing!) club was established in Paine's time at the White Hart Hotel in the town. It was reestablished in January 1987 by David Powell, a biographer of Paine, and yours truly, with the help of others, in the same room in the White Hart, with Bernard Crick (biographer of Orwell) giving the encomium. Thirty years later, some 70 people gathered upstairs at the Elephant & Castle to mark the occasion, to celebrate Paine's birthday and also to pay tribute to David Powell, who died last May and is sadly missed. THE GENERALIST acted as MC, wearing a borrowed tricorn hat and running a PowerPoint presentation. It's a style that could catch on - or not. 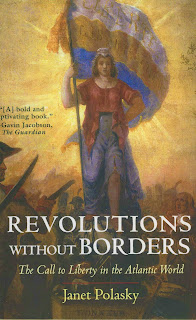 In parallel with this, THE GENERALIST was reading this remarkable and fascinating book in which Tom Paine plays a starring role but is offstage for most of the drama. Janet Polasky has spent much of her academic life studying the revolutionary period 1776-1804 which encompasses the American and French Revolutions. These it turns out are only the biggest and most well-known revolutions. In fact, there were various levels of unrest down both sides of the Atlantic -  hence the subtitle : 'The Call for Liberty in the Atlantic World' -  and there was a network of travelling revolutionaries who were trying to link them all together, believing that they were all  part of a larger vision that was transforming the world. Translators and printers formed a sedentary part of this network, which communicated through a paper internet.

In Polasky's book, each chapter focuses on a different aspect of this - pamphlets & broadsheets, papers, letters, travel reports - read and discussed on networks of coffee shops and taverns. Paine was the most famous of these communicators but Polasky introduces us to some 50 more people whose achievements were significant and whose names deserve greater recognition. Her book succeeds in offering us a widescreen vision of this remarkable period when many peoples and populations were struggling to overcome border controls. Does that ring a contemporary bell with you dear readers?

PREVIOUS POSTS: TOM PAINE AND DAVID POWELL: A LEWES TRIBUTE
For many other Paine stories on The Generalist use search box at top left.