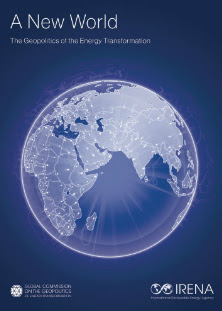 This report from the International Renewable Energy Agency (IRENA) - a central platform for international cooperation on renewables- is a clear-sighted well-written accessible document about the geopolitical implications of the shift from the Fossil Fuel era to a world running on renewable energy.

An IRENA Global Commission, supported by the governments of Germany, Norway and the United Arab Emirates, initiated this  year-long study which was published in January 2019. It can be downloaded for free. Here are some filletted highlights:

'The shift from fossil fuels to renewables is driven by new technologies and falling costs, increasingly making renewables as competitive as conventional sources of energy. The energy transformation is also driven by the policies and actions of governments, businesses, cities and civil society, as well as the world-wide movement to combat climate change and dangerous air pollution.'


'Renewable sources of energy—particularly wind and solar—have grown at
an unprecedented rate in the last decade and have consistently surpassed
expectations. The growth of their deployment in the power sector has already
outpaced that of any other energy source, including fossil fuels, which include
oil, coal and natural gas. Renewables, in combination with energy efficiency,
now form the leading edge of a far-reaching global energy transition.'

'Many developing economies will have the possibility to leapfrog fossil fuel based systems and centralized grids. Renewables will also be a powerful
vehicle of democratization because they make it possible to decentralize the
energy supply, empowering citizens, local communities, and cities.'

Countries such as Denmark already generate more than half their electricity from variable renewable energy sources. In 2017, Costa Rica’s electricity was generated entirely from renewable energy for 300 days. For several days in the past year, the power systems of Germany, Portugal and Denmark were able to run entirely on renewables.'

Electrification. Electricity accounts for 19% of total final energy consumption,
but its share is expected to grow as increased electrification of end-use sectors
takes place. The deployment of heat pumps and electric vehicles, for example,
permits electricity to be used for heating, cooling, and transport. Electricity
has been the fastest growing segment of final energy demand, growing two-thirds
faster than energy consumption as a whole since 2000. This trend is
set to continue. Since 2016, the power sector has attracted more investment
than the upstream oil and gas sectors that have traditionally dominated energy
investment, another reflection of the ongoing electrification of the world’s
economy. 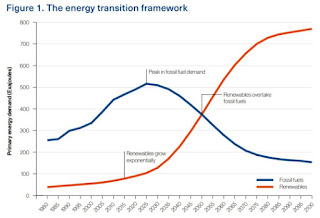 This data is taken from the Shell Sky Scenario (2018), which has the merit of forecasting to 2100 and therefore projects the nature of the energy transformation over the course of the century.

[According to The Times [25th March 2019] the Royal Dutch Shell group, valued at close to £200 billion, wants to become the world's biggest electricity company by the 2030s]

The steep decline in costs of renewable energy and energy storage has surprised even the most optimistic observers. Once dismissed as too expensive to expand beyond niche markets,solar and wind can now beat conventional generation technologies on cost
in many of the world’s top markets, even without subsidies.

Since 2010, the average cost of electricity from solar PV and wind energy has
fallen by 73% and 22% respectively. In countries as dissimilar as Chile and
Saudi Arabia, India and the United States, electricity is being produced in
optimal locations for around 30 US dollars per megawatt hour (MWh).

The cost of lithium-ion batteries, which are used in electric vehicles,
has fallen by 80% since 2010.

Significant cost declines are expected to continue over the course of the next
decade. IRENA estimates that by 2025 the global weighted average cost of
electricity could fall by 26% from onshore wind, by 35% from offshore wind,
by at least 37% from concentrated solar power (CSP) technologies, and by
59% from solar photovoltaics (PV).18 The cost of stationary battery storage
could fall by up to 60%,19 and there is growing confidence that electric and
conventional vehicles will be sold at comparable prices by the mid-2020s.


2. Pollution and Climate Change
The World Health Organization estimates that nine out of every ten people in the world breathe polluted air that is hazardous to health and wellbeing, and that air pollution kills 7 million people every year, making it the fourth largest cause of death.

An analysis by IRENA has shown that deployment of renewable energy combined with improved
energy efficiency provides the most cost-effective way to achieve the 90% reduction in energy-related emissions that is required to meet the Paris Agreement target.

3. Renewable EnergyTargets
So far, 57 countries have developed plans to decarbonize their electricity
sector completely, and 179 have set national or state renewable energy targets.

4. Technological Innovations:
In the long term, next generation biofuels and renewable hydrogen
generated from electrolysis may permit renewables to extend into a
growing range of hard-to-electrify sectors, such as aviation, shipping and
heavy industry
New digital technologies, such as smart grids, the internet of things,
big data, and artificial intelligence, are being applied in the energy industry,
helping to raise its efficiency and accelerate the use of renewable energy
within emerging smart generation and distribution systems.

Both Apple and Microsoft recently announced that their facilities
are completely powered by renewable energy. Many other companies, including
IKEA, Tata Motors and Walmart, have committed to source 100% of their
electricity consumption from renewables.


Public opinion is not only being expressed through words but also through direct
actions. Demonstrations against air pollution have taken place in numerous
cities, from Beijing to London. Approximately 15,000 Australian school children
took part in a school strike to demand action by their government against climate
change. New social movements, such as Extinction Rebellion and the Sunrise
Movement, are campaigning for radical action to tackle climate change

Litigation is on the rise too. A court in the Hague ordered the Dutch government
to reduce the Netherlands’ greenhouse gas emissions by at least 25% by
2020 compared to 1990 levels


*
COUNTRIES
China is the biggest location for renewable energy investment,
accounting for more than 45% of the
global total in 2017.

No country has put itself in a better position to become the world’s renewable energy superpower than China. In aggregate, it is now the world’s largest producer, exporter and installer of solar panels, wind turbines, batteries and electric vehicles, placing it at the forefront of the global energy transition.

Germany leads the way with almost 31,000 renewable energy patents. Germany’s domestic Energiewende, or ‘energy transition’, has made the country a frontrunner in renewable energy deployment

India has set itself an ambitious target of 175 GW of renewables by 2022.


Iceland is a good example of the benefits that can accrue from an economic
transformation based on renewables. During the 20th century, it evolved from
being one of Europe’s poorest countries, highly dependent on imported coal
and oil, to a country with a high standard of living, which derives 100% of its
electricity from hydro and geothermal energy. The effective development
of its renewables has enabled Iceland to bolster its energy security, widen
its economic base, and attract new industries to the country, including aluminium
smelting, data storage and greenhouse agriculture


Some countries, such as Albania, Ethiopia, Lesotho, Norway, Paraguay and Tajikistan,
already obtain all or almost all of their electricity from hydropower, which is
an established technology that provides stability in the transmission system.
Others have achieved similar results using a mix of renewables. Brazil,
Costa Rica, New Zealand and Kenya, for example, generate more than 80%
of their electricity from a combination of hydro, geothermal, wind, biomass
and solar power.


Australia’s economically demonstrated solar and wind
energy resources are estimated to be 75% greater than its combined coal,
gas, oil and uranium resources.

In the Atacama Desert, Chile has amongthe world’s best solar resources, as well as high potential or wind, hydropower, geothermal and ocean energy. In both cases, however, the remoteness of these locations will probably constrain electricity exports.

Due to the falling cost of solar PV and wind power, as well as smart distribution
systems, almost anyone with a rooftop or some land can produce electricity,
either for self-consumption or for the grid. These developments will generate
a more diverse energy ecosystem. Local and distributed forms of energy
generation give households and communities more autonomy than centralized
grid systems.

As more people install solar panels, batteries and smart software, formerly
passive consumers of electricity may become consumers and producers of
electricity in an interconnected grid.Advances in communication technology
may lead to the emergence of an ‘energy internet’, allowing hundreds of millions
of people to produce electricity in their homes, offices and factories and share
it peer-to-peer

In 2016 private citizens in Germany owned 31.5% of installed renewable
power capacity, making them the largest ‘bloc’ of investors in the sector

In the United States, microgrids became popular after Hurricane Sandy
knocked out power for 8.5 million people in 21 states

Countries in Africa and South Asia have a golden opportunity to avoid expensive
fixed investments in fossil fuels and centralized grids by adopting mini-grids
and decentralized solar and wind energy deployed off-grid—just as they
jumped straight to mobile phones and obviated the need to lay expensive
copper-wired telephone networks.

Cities occupy a central role in the energy transformation. By the middle of
this century, 70% of the world’s population is expected to live in cities. Cities
consume around two-thirds of generated energy and produce 70% of the
world’s carbon emissions. They are also especially vulnerable to the effects
of climate change, including coastal flooding and urban heat island effects.
At the same time, they have the means to shape the new energy landscape.

Cities are already taking decisive action. In 2017, more than one hundred
towns and cities were sourcing up to 70% of their electricity from renewables,
compared to 42 in 2015. Several capital cities are among them, including
Oslo (Norway), Dar es Salaam (Tanzania), Quito (Ecuador) and Wellington
(New Zealand).

Yokohama, Japan’s second largest city, is deploying a smart
city project that has led to a roll out of smart grids, solar PV panels and electric
vehicles. New megacities are being announced and built to run entirely on
renewable electricity, such as Neom, which will be constructed near the Red
Sea and Aqaba Gulf.

Cities and local municipalities are also forming global alliances and networks,
including C40, ICLEI and the global covenant of mayors

The widespread adoption of renewable energy and related technologies, such
as solar panels, wind turbines, electric vehicles, and energy storage technologies,
will increase the demand for a range of minerals and metals required
for their production

The largest reserves of metals and minerals required for renewable
technologies are found in weak states with poor governance records. More
than 60% of the world’s cobalt supply originates in the Democratic Republic
of the Congo (DRC).

In Colombia, a country in which the
longest-running internal armed conflict has taken place, various armed groups
have controlled and exploited illegal tin, tungsten, tantalum and gold mining
resources.
Efforts have been made to address the issue of so-called conflict minerals.


The interplay between water, energy and food supply systems—the nexus—


creates major geopolitical challenges for countries at a time of accelerating

On current trends, about 674 million people, mainly in Africa, could still be without power in 2030.

Estimates suggest that off-grid solutions (standalone and mini-grids) could supply approximately 60% of the additional generation needed to achieve the goal of universal energy access by 2030.
at 12:42 am No comments: