It is with great sadness that THE GENERALIST reports the death of Mick Farren, a long-time friend and elder brother figure to me, who was a key figure in the British underground scene in the 60s and 70s. Founder and lead singer of The Deviants, one-time editor of International Times,  noted NME writer, prolific author, great blogger, Mick had a big heart often hidden behind a tough troublesome front. Possessor of a big ego and an afro to match, he over-indulged in life with great abandon and pushed the pedal to the metal right up his final dramatic act - his death on stage at the Borderline in London.

Mick grew up in Worthing and us younger Worthing lads looked up to him as an iconic freak. We were the ground crew who helped create the stage and site for Phun City – the first great British free festival – which featured the first-ever performance in the UK by the legendary MC5.

Later I worked on the underground press, hung out in the Grove and saw Mick at gigs, parties and demos on a regular basis. Mick got me into the NME and I was regular writer for Thrills which he edited.

Lost touch with him during his long sojourn in New York and LA but reconnected when I helped  get a flat in Brighton for him (and the cat). Fortunately I promoted one of the last Deviant gigs at the Con Club in Lewes in Dec 2012.

I very recently reviewed his last publication – a fat anthology of his writings from Head Press here. This post has links to several other Previous Posts on Mick.

Mick was a stand-up guy, always  looking out for me and always buying me a beer when he knew I was virtually penniless. Fortunately I was able to tell him in person how much that meant to me before he died.

Mick was a tough nut, unafraid of speaking his mind and difficult to impress, who evolved a unique journalistic style that was pithy, sharp and dark. He loved bourbon, speed, smoke, leather jackets, cowboy boots, Gene Vincent and Elvis and he stood up with great courage to both the Establishment and his own demons. He was no angel and had no room for sentimentality. He created his own legend and in his version of events he was always centre stage.

Like many others, I miss him badly. He was a true rebel spirit.

Unpublished photos by yours truly of Mick doing a reading from ‘Give The Anarchist A Cigarette’ at Waterstones in  Brighton in 1998. Top picture is the after-show party in a room above a gay club off the Steine. Mick improvises whilst Tim Rundall (I think) plays guitar and son Louis tinkles on the piano!! 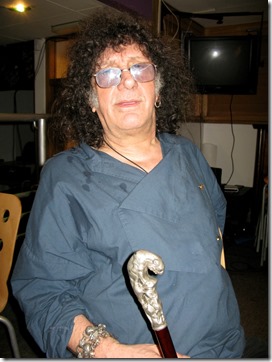 Thanx to Richard Adams for sending over this pic of Mick at the Inn on the Green in Ladbroke Grove, snapped 28 May 2009. Richard comments: ‘I think he’d just arrived in England after America had taken its toll.’

Two great pictures taken by the legend that is Joe Stevens – one of them is a beauty of a colour shot of Mick and Ed Barker – together with a pithy tribute from Joe.

This is the uncut version of an article that appeared in The Guardian by Charles Shaar Murray: ‘Mick, we hardly knew ye…’

The pic, recently unearthed by Chalkie Davies, shows Miles, CSM, Micky and Chalkie in Brighton,summer of 1976.