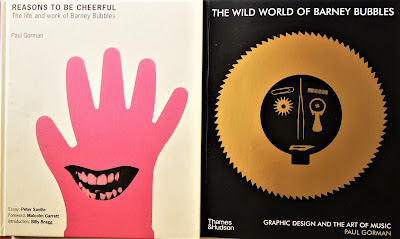 This post was written the day after the London launch of Paul Gorman's first  book on Barney Bubbles 'Reasons To be Cheerful'. Born and named Colin Fulcher on 30th July 1942,  he took is own life on the14th on November 1983. For more than a decade his work was neglected. He is now revered as a marvellously imaginative graphic designer and artist in his own right who pioneered and opened up new worlds of vinyl art which inspired others.

'The Generalist was in London last night, attending the book launch of 'Reasons to be Cheerful: The life and Works of Barney Bubbles' by Paul Gorman, held at Paul Smith's shop on Park Road, just off Borough Market. For those of us who knew him, the book will bring back memories of the impish delight Barney took in his friends and colleagues, his electric enthusiasm for his work, his constant innovations and unending search for the new and above all his inspiring and fun-filled presence. For those coming fresh to his work, particularly young artists, illustrators and graphic designers, they will find a huge source of inspiration and marvel at the effort and industry involved in achieving many of his finest artworks in that pre-digital, hands-on age of yore.

This book was designed by Paul's partner Caz Facey and was published by Adelita, a limited company with Paul and Jenny Ross as directors. The company folded in 2019. When I looked only two copies are currently available on Amazon priced at £470.19.

This second post sketches in the stages of rediscovery of his work by others in Ladbroke Grove before Paul Gorman. Much of Barney's work was unsigned or credited using pseudonyms, so much of his huge creative achievement was obscured. 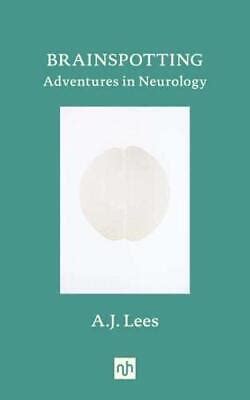 Back in  May 8th 2016 I posted one of the first reviews of 'Mentored By A Madman: The William Burroughs Experiment by A.J. Lees - a striking and important book by one of the world's leading experts in the treatment of Parkinson's. Burrough's writings drew on his experiences with a wide variety of mind-altering substances and his search for an addiction cure helped Lees find a new treatment for his patients.

'Brainspotting: Adventures in Neurology' his newly published work. is a valuable follow-on providing a detailed picture of his career in neurology and the techniques that he used to diagnose a wide variety of neurological problems. He says it was ten years of apprenticeship before he felt confident enough distinguish a healthy person from an ill one.

He estimates that he has treated about 30,000 patients in NHS clinics and several thousand more in consulting rooms at the University College Hospital and the National Hospital in Queen Square, London. He has also taught undergraduate and post-grad students and lectured to colleagues all over the world.

He provides valuable profiles of the historic greats in the world of neurology who had influence on him and helped him treat and understand neurological problems. Interestingly another mentor was Sherlock Holmes whose intense attention to details and unusual thought processes influenced Lees approach to the complex problems. Lees includes a opening quote in which Holmes says to Watson; 'life is infinitely stranger than anything which the mind of man could invent.'

Conan Doyle repeatedly said that Holmes was inspired by the real-life figure of Joseph Bell, a surgeon at the Royal Infirmary of Edinburgh, whom Conan Doyle met in 1877 and had worked for as a clerk. Like Holmes, Bell was noted for drawing broad conclusions from minute observations. However, he later wrote to Conan Doyle: "You are yourself Sherlock Holmes and well you know it". [Wikipedia]

In 1972 Lees expanded his medical training by enrolling for a year with a hospital in Paris which, in the 19th century, was led by the skills and ideas of Jean-Martin Charcot. Lees says Charcot's 'second sight had allowed him to see patterns of disease that no one before him has ever noticed.' When Lees arrived the chief man was Francois Lhermitte. 'His approach was often just to listen, observing the body language and analysing every move the patient made with endless fascination...His insatiable curiosity and innovative ways of thinking about neurology would leave a lasting impression on me,'

Back in Britain Lees followed a scheme taught and perfected by The Dublin-born British neurologist Dr Gordon Holmes in the year between the two World Wars. He punctiliously examined  each of his patients from top to toe and then double checked their clinical history. Lees says 'His infallible method hinged on practiced, organised common sense.'

Lees  underlines his belief that detailed physical examination 'is neither outdated or obsolete and it is far more efficient in localising the site of the neurological problem than any single machine.

'The laying on of hands - the intimate bond of touch he says, changes the dynamic between patient and doctor forever'.

'It also  serves as a  transcendent comforting force that promotes trust and reduces loneliness, anxiety and despair. Touch comes before words and is the first and last language. It is an essential constituent of healing and another way of listening that never dies.' Beautifully expressed.

William Gooddy one of his first teachers at University College Hospital, said to him 'Lees, neurology is deadly serious but it must also be full of soul'

The book is filled with interesting real-life cases and characters. I love Robin Osler Barnard who every day arrived wearing a bowler hat, smart navy-blue overcoat..in summer a boater, blue blazer with an umbrella to hand. His tutorials always began with his secretary offering them Earl Grey Tea and a slice of Dundee cake. Lees says; 'He was a quaint traveller from an antique land determined to preserve falling standards but what he taught me about pathology was of immense contemporary value.'

'With a wry grin he told me that the number of neurones in the brain was the same as the number of stars in the Milky Way.' A few pages later Barnard is in the mortuary conducting a post-mortem investigation, a process that is described in some grim detail.

Another chapter is based on Sherlock. He says 'The unreal universe of Sherlock Holmes was my primer in neurology and it became a bridge to Dr William Gowers, arguably the great neurologist that ever lived.' He was interested in the commonalities between neurologists and criminal detectives. 'They both seek hidden truths and meanings in complicated and often contradictory data'.

In a final and fascinating end chapter, Lees examines the recent history of machine learning, brain scans and other new technological developments. He concludes: ' The less time I spend trying to decipher the latest medical science, the better listener - and better neurologist - I become.'