Four important interviews have been added to the Audio Generalist in the last couple of months
for your listening pleasure.

First the two interviews I conducted in 1984 and 1986 with the famous foreign correspondent Ryszard Kapuscinski, who I have written about extensively here.

Second, the interview I conducted with Al Gore in 1992 on the eve of the Rio Earth Summit.
Read more abour Gore here

Thirdly, a brand new interview with the poet Michael Horovitz about his major new work 'A New Waste Land.' See previous posting here.
at 11:24 am No comments: 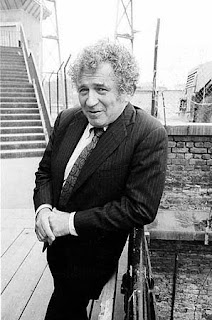 [Left: Norman Mailer outside the Roundhouse in London. Photo copyright ©Phil Franks. All rights Reserved. Used with permission. From the archives of the underground newspaper Frendz.)

A large tree has fallen in the forest. The seemingly indestructible force that was Norman Mailer has left the planet for adventures in other dimensions. Mailer has been part of my life since reading 'The Naked and the Dead' in my teens (reread a chunk of it recently and it still works). Remember seeing him being patronised by Michael Parkinson on British tv many years later and getting really angry. Mailer to me was an astounding writer and journalist whether it was the crackling reportage of 'Armies of the Night', 'Miami and the Siege of Chicago' and 'The Fight' or the epic retellings in fictional form of the life and death of Gary Gilmore ('An Executioner's Song') and life inside the CIA ('Harlot's Ghost')

[This is a giant slab of a book of which I read 566 pages - roughly halfway through. Its great but I ran out time. The hardback I bought is signed. For some reason I can't really convince myself that the signature is real - see below. Maybe someone out there can confirm.]

Left: A further interesting digression on 'Harlot's Ghost', found in The Generalist Archive.]

Mailer wrote a great book on the moon missions ('Of a Fire on the Moon'), an entertaining and wacky emotional essay on Marilyn Monroe ('Monroe') and a great overheated crime novel 'Tough Guys Don't Dance', which he also directed the film of. His final novel was 'The Castle in the Forest' (2007), an account of the youth of Adolf Hitler, narrated by a devil.

My single favourite piece of writing of his, which I have read time and again and which is a touchstone to me, is a short essay in 'Advertisments for Myself', first published in the UK in 1961.

Written in 1957, entitled 'The White Negro' and subtitled 'Superficial reflections on the hipster', it is a key text for getting an understanding of the feel and mood of those times. Its words ring
out about the psychic effect of the discovery of the concentration camps and the dropping of the bombs on Hiroshima and Nagasaki. This short extract will give you a strong taste:

A man knew that when he dissented, he gave a note upon his life which could be called in any year of overt crisis. No wonder then that these have been the years of conformity and depression. A stench of fear has come out of every pore of American life, and we suffer from a collective failure of nerve. The only courage, with rare exceptions, that we have been witness to, has been the isolated courage of isolated people.

It is on this bleak scene that a phenomenon has appeared: the American existentialist - the hipster, the man who knows that if our collective condition is to live with instant death by atomic war, relatively quick death by the State as /'univers concentrationnaire, or with a slow death by conformity with every creative and rebellious instinct stifled (at what damage to the mind and the heart and the liver and the nerves no research foundation for cancer will discover in a hurry), if the fate of twentieth-century man is to live with death from adolescence to premature senescence, why then the only life-giving answer is to accept the terms of death, to live with death as immediate danger, to divorce oneself from society, to exist without roots, to set out on that uncharted journey into the rebellious imperatives of the self. In short, whether the life is criminal or not, the decision to encourage the psychopath in oneself, to explore that domain of experience where security is boredom and therefore sickness, and one exists in the present, in that enormous present which is without past or future, memory or planned intention, the life where a man must go until he is beat, where he must gamble with his energies through all those small or large crises of courage and unforeseen situations which beset his day, where he must be with it or doomed not to swing....'