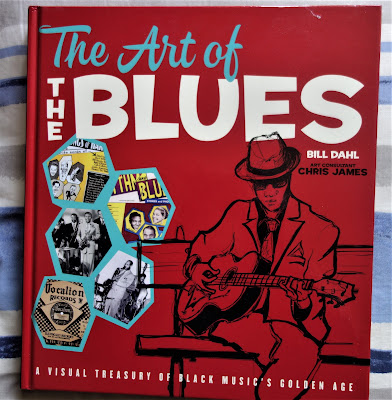 THE GENERALIST ARCHIVE has a substantial collection of music books and magazines, clippings, tickets, photos, programmes, posters and vinyl. Happy to add these new titles to the library.

'The Art of the Blues: A Visual Treasury of Black Music's Golden Age' actually came out in 2016 so its only taken me three years to get round to writing about it! Better late than never. Its a stunner. The text is deeply researched and fluently written by Bill Dahl a freelance music journalist, a prolific liner note writer and author of 'Motown: The Golden Years'.

Invaluable knowedge and advice was provided by Chris James, an award-winning recording artist and music historian. His music featured prominently in the Martin Scorsese's PBS doc The Blues'. His collection of blues artwork and ephemera has provided a large chunk of the rare material showcased in the book. Hats off also to Paul Palmer-Edwards of Grade Design who has done a real fine job throughout with classy layouts that show off the material to best advantage.

In his introduction, Dahl describes the book as a tribute to the visual side of Blues golden age 'when rare and beautiful images abounded that perfectly complemented the epochal music' He writes: 'Although scholars have stringently established boundaries between blues and jazz, there was a time when artificial seperations between African-American musical genres did not exist'  and black music was universally stereotyped under the umbrella of "race music". This gumbo stew hybridised different musical strands and incorporated a wide number of regional styles. The visual presentations of the music similarly passed through different phases which makes this landmark book a valuable historical reference work and educational tool as well as being a stimulating and joyful book to browse. 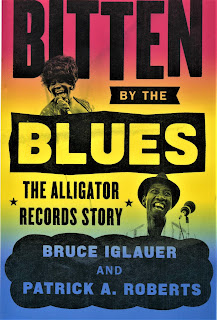 Also from Chicago UP comes a straight forward entertaining blow-by-blow account of the first 40+ years of what is widely regarded as the numero uno indie blues label in the world. Bruce Iglauer founded the label with his first release by Hound Dog Taylor & The HouseRockers in 1971. In his liner notes to the Alligator Records 45th Anniversary Collection he wrote:

'Alligator was a leap of faith, an underfinanced one-man operation run out of an efficiency apartment. It was launched with an album by a band virtually unknown outside of the South and West Side Chicago neighborhood blues clubs where they played. The band had no national reputation, no booking agent or manager and they were not creating music that sounded much like anything getting played on any form of commercial radio. Yet their unbridled energy, unfettered joy and the raw soulfulness and glorious racket of their music somehow communicated to people all over the world, making them blues legends and making their debut recording a classic that continues to be discovered by legions of new fans.' 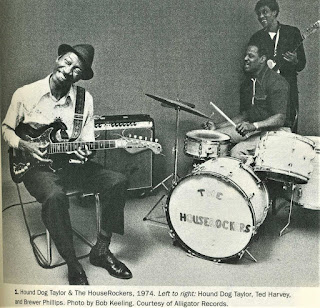 'Forty-five years later, Alligator Records, now with a catalog of almost 300 albums, continues to be guided by the same philosophy that led to that first recording—the belief that direct, unvarnished, straight-from-the-soul blues and blues-rooted music, the music we call “Genuine Houserockin’ Music,” speaks to some primal, necessary place in people’s consciousness.'


Writing about music is an art form. These titles illustrate aspects of what is a very broad church. By and large, music critics and music writers are male (with notable exceptions). There's a geekish schoolboy contingent and increasingly an academic diaspora. In my experience, music is best discussed at the bar. We all have some favourite music writers. Many of mine were/are mates from my time at the underground newspaper Frendz and/or the New Musical Express. 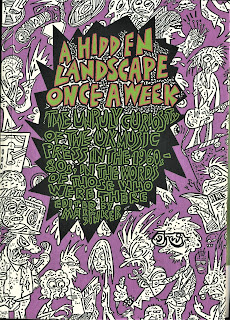 'A Hidden Landscape Once A Week'
The Unruly Curiosity of the UK music press in the 1960s-80s, in the words of those who were there'.

The Start of It All

In May 2015 Mark Sinker convened a conference at Birkbeck, University of London, in Bloomsbury. 'Underground-Overground: The Changing Politics of UK Music-Writing 1968-85' brought together writers, editors and readers of the underground and trade music presses of the 1960s-80s with academics and other media commentators, to discuss the emergence and evolution of the countercultural voice in the UK, as inflected through the rock papers and music press in those decades. Funded by a successful Kickstarter in July 2016, this anthology includes edited select transcripts of some of the Birkbeck panels, plus essays and memoirs from and interviews with participants and others, to expand the story and dig further into some of the issues.

'For almost three decades, the UK music press was the forging ground for a new critical culture, where readers could encounter anything from comics and cult films to new musical forms and radical underground politics. It created an off-mainstream collective cultural commons improvised through a networked subculture of rival weeklies, monthlies and fanzines, including such titles as NME, Melody Maker, Sounds, Record Mirror, Black Echoes, Black Music, Let It Rock, Street Life, ZigZag and Smash Hits.

'Edited by Mark Sinker, this anthology of conversations, essays, memories and commentary explores how this hitherto under-charted space first came about, who put it together, what it achieved, and where it went. Along the way, it unearths the many surprising worlds explored by this network of young anarchists, dreamers and agitators, who dared to take pop culture seriously, and considers what remains of their critical legacy. '

There is much to enjoy here and students of popular culture will find info and quotes for a wide variety of theses. As someone who was there at the time, this feels like perhaps a final hurrah. It was a long time ago. Its good that the effect the underground press had on the music press has been recognised. It's a book to dip into and ponder. Music writing now is rarely exciting. 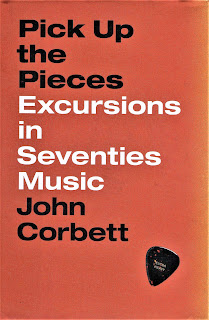 Pick Up The Pieces: Excursions in Seventies Music
According to Wikipedia, John Corbett (b.1963) is an American writer, musician, radio host, teacher, record producer, concert promoter, and gallery owner based in Chicago, Illinois. He is best known among musicians and music fans as a champion of free jazz and free improvisation. A staff writer for Down Beat magazine, he curates live gigs, was artistic director of the Berlin Jazz Festival (2002) produces the Unheard Music Series for Atavistic Records and much more.

With three books in the hopper including 'Vinyl Freak: Love Letters to a Dying Medium', this new substantial volume is made up of 78 essays of various lengths which document his varied listening highlights through the 1970s and his life experiences, from 7 to 17, attached to them.

Corbett writes: 'This...is a look at the sound of the seventies as I made sense of it at the time, from the sublime to the pathetic, and also as I pieced it together after the fact, from later points in life, when I uncovered compelling music I had missed and parsed things about my music that I'd failed to grasp.'

The approach and concept has the benefit of being fresh and interesting but not all the essays hit the spot. Some tested my patience and appeared to be over-the-line pretentious or too freeform. Others were informative and interesting. There always has been a difference between UK and US music writing, although Lester Bangs was a founding influence on both Corbett and Nick Kent. The writer becomes as important as the music he or she's reviewing. A book like this is hard to pull off as journalism students will discover if they try and emulate his approach.

Lengthy interview/conversation  with John Corbett by the American novelist Rick Moody about this book on the Rumpus website. 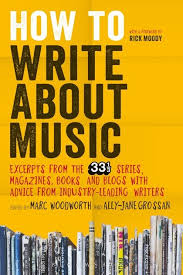 In 2003, Bloomsbury Books launched a new series of titles entitled 33 1/3. There are currently 135 titles with more to come according to the series website. They have also published this book by Rick Moody.

According to an essay in Pitchfork by Stephen M. Duesner [29 June 2015), which celebrates the first 100+ titles and chooses what he thinks are the 33 best, he writes:'When the series started assigning one album to one author back in 2003—right around the time the album was rumored to be cooling on a slab in the pop culture morgue, ready to be opened up and autopsied—there was no template for this kind of publication, no prescribed notions to fill. The books could take the shape of an essay, or a work of fiction, or even some odd hybrid of both. But whatever the format, these paperbacks are aggressively accessible: short, pocketsize, easily consumed during a few commutes. Perhaps more crucially, potentially anyone can write a 33 1/3 book: critics, academics, journalists, musicians, poets, assorted armchair commentators.' 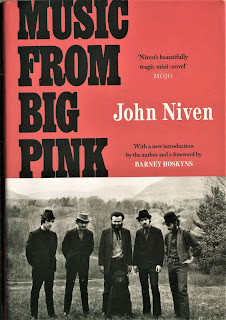 'Music From Big Pink' by Scottish novelist John Niven was republished in this series in 2018. Niven was born in 1968 when the album first came out. He cleverly combines fact and fiction through the eyes and ears of the main character Greg Keltner, a musician and drug dealer, who manages to inveigle himself into the Woodstock scene with Dylan and The Band, becoming one of their main suppliers. Music writer Barney Hoskins, whose studied and completed his own non-fiction book on this scene, writes in an intro of his 'mesmerised disbelief that a thirtysomething Scotsman could, with such uncanny accuracy, catch the heady geist of that late 1960s zeit'. The book is a compact 160pp tale that both rings true and captures the magic of those times. A great read.


[This post was inadvertantly deleted after I first published it. Happily the press people at Chicago University Press had copied it out and I am most grateful to them for rescuing it]
at 1:44 pm No comments: