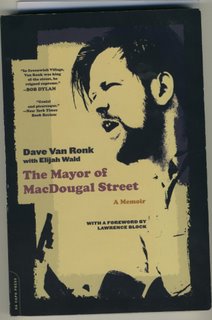 Firstly, apologies to regular readers for the lack of postings this month. Real life has intervened in the shape of professional deadlines.

In addition, I have launched a new blog which has required a great deal of work and attention: The World of Trees I hope you enjoy it.

Book of the Month: One of the most articulate and interesting interviewees in Martin Scorsese's Dylan documentary was the legendary Dave van Ronk, whose autobiography 'The Mayor of MacDougal Street' has recently been published by Da Capo Press. Van Ronk, who died in 2002 actually set out to write a social history of the culture of Greenwich Village but passed on before such a project could be completed. His friend and biographer Elijah Wald (author of the acclaimed 'Escaping the Delta', a biography of Robert Johnson) took the chapters van Ronk had completed and, in a masterful manner, pieced together the remainder of the narrative with consummate skill and grace. Van Ronk's distinctive voice resonates throughout the book and this remarkable work of biographical ventriloquism takes the reader to the heart of the burgeoning folk scene of the 1960s in which van Ronk was to play such an important role. This bear of a man knew and played with all the major figures on the scene, encouraging the young Dylan and even housing him for a while. He also hung out with jazz greats and politicos and proves the perfect guide to the intricacies of the late '50s bohemian culture. For musicians, there's a lot of detailed instrument talk here plus a non-airbrushed view of the scuzziness of the nascent folk circuit. Van Ronk had a built-in bullshit meter, refused to suffer fools gladly and was never backwards in coming forwards with an opinion, however unfashionable. This engaging memoir, stuffed with tall tales and vivid anecdotes, leavened with a deep streak of black humour, is a fitting memorial to one of the true originals.

Delighted that legendary Dylan scribe Michael Gray has got his own blog up and running here: http://bobdylanencyclopedia.blogspot.com/

His new book 'The Bob Dylan Encyclopedia' is due to be published in the States and here by Continuum, on June 15th (H/B 832 pages. £25/$40). The first edition will contain a searchable CD-Rom and has 850 entries and 16pp of illustrations. According to the publishers, the many different kinds of entries include:

- Bios of singers, musicians, songwriters and composers who have influenced Dylan and/or worked with him
- Critical assessments and factual details (including place & date of recording, date of release and original catalogue nos.) for every Dylan album and for a large number of individual songs selected from Dylan’s decades of work
- Bios of writers, poets and other key cultural figures who have impacted on Dylan’s work and/or who are mentioned within it, from William Blake to William Carlos Williams, from Lenny Bruce to Franz Kafka
- Topics like Artists vs. Critics, Angels, Dylan Interpreters, The Co-option of Music of Advertising, Early 1960s Pop Music, Beat Poetry, Rock’n’Roll, Country Blues, Pre-C20 American poetry, Dylan Fanzines, Cowboy Heroes, The Use of Hollywood Dialogue in Dylan’s Lyrics, ‘Grandma and Walpole’s Cat,” “Frying an Egg on Stage,” and many many more.

RIP: Ali Farka Touré
Writer Bill Cardoso, who coined the term "gonzo" to describe the journalism of Hunter S Thompson, has died in California at the age of 68.

Publishing on Demand: There's been a flurry of articles of late on the new possibilities offered through digital publishing for aspiring authors to see their work in print by creating their own books. This kind of thing used to be called 'vanity publishing' but is now reemerging as yet another aspect of the 'digital empowerment' debate. Still early days, but the skeleton of a new world of publishing is now visible. [Thanks to Flo for the sources]

'Publish and be downloaded' by Damian Whitworth
An internet entrepreneur says his latest venture will revolutionise the book-publishing industry, turning us all into potential J. K. Rowlings

'Frustrated author? Publish yourself' and the follow-up piece 'Click, download, publish' by Victor Keegan. Go to http://technology.guardian.co.uk/ and search by author.

'From blog to book' [The Bookseller]: 'The New York Times tells us that blogs that aspire to literary permanence, can now achieve it through the new Book-Smart software from Blurb, a publish-your-own-book service. "The software, which is expected to be available free later this month at www.blurb.com, features a 'Slurper' tool that automatically downloads and reformats the contents of a Web log into a book that bloggers and their admirers can purchase online."

Find out about the Lulu Blooker Prize, the world's first literary prize devoted to "blooks": books based on blogs or websites.

The number of bloggers - people who write online journals - topped 30m during the week of March 11th, according to technorati.com, the search engine that monitors activity of this kind. 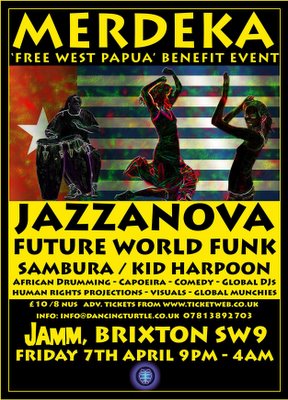 A powerful poster for an important event.
See: http://www.freewestpapua.org/ and http://www.infopapua.org/

Delighted that the first story to be picked up from THE GENERALIST is currrently featuring on the US alt-journalism site www.mixeye.com/ Click Browse and go to 'The Truth Is Out There Somewhere.'

Pleased to get one of my pictures in the latest issue of Viva Lewes, our fab new local web mag. This is an original site by any standards - it scrolls sidways for one. A beautiful piece of web design, complemented by genuinely interesting editorial with real style. In addition, it is providing an important service to the local community, giving the town a new view of itself. An unqualified success.

Excited by the fact that our band BOHO is now featuring on http://www.myspace.com/bohobeat.
Check it out.

There is the thinnest of crescent moons tonight. The world is turning.
at 8:48 pm No comments: