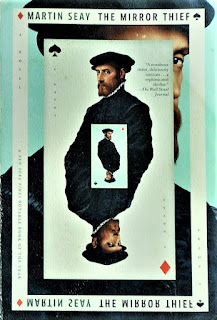 This is the book and the bag that it came in. Rupert told me he was going to City Lights bookstore in San Francisco and I asked him if he would buy me a book. He made a brilliant choice but as the message on the bag says, its delivery was delayed as he had to read it first.

'The Mirror Thief'  [Melville House. 2017] is a really exciting 574pp novel, the best I have read since Sergio De La Pava's 'A Naked Singularity', bearing comparison to Umberto Ecco. The author Martin Seay is the executive secretary for the village of Wheeling, Illinois. This is his first novel. Unbelievable!

There are three streams in the book, set in three Venices: The real sixteenth century Venice, a time when they were just perfecting the art of making mirrors; Venice Beach , California in 1958 and the Venetian Casino in Las Vegas in 2005. In each story there are plans to steal secrets. Intriguing and totally absorbing, it's a wonderful read. 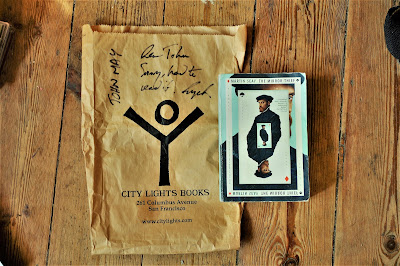 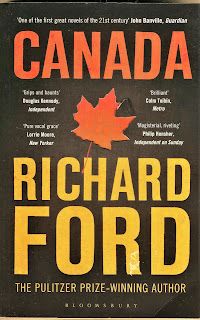 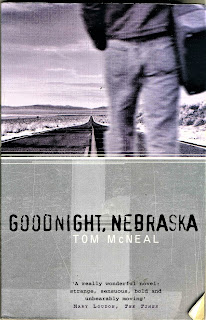 These next two books link backwards and forwards. 'Goodnight, Nebraska' [Black Swan. 1999]  is also a first novel by Tom McNeal, who is a published short story writer. The main character is a  teenage boy whose family life is shattered and he has to move to a small town in the wilds of Nebraska, full of weird people and strange intrigues. This is a really meaty story, brilliantly written, full of detail. It stands up alongside 'Wyoming Tales' by Annie Proux (reviewed previously)

'Canada' [Bloomsbury.2013] is by Richard Ford, one of the best-known novelists in the States. His main character is a young boy whose family life is shattered and he has to move to a small town in the Canadian outback. Here there's grim and dastardly characters and nasty deeds going on. Ford is a maestro and this is beautifully constructed and written. Another totally absorbing and gripping tale. 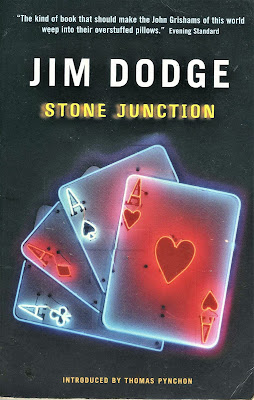 Lastly comes 'Stone Junction' [Canongate. 2004] by Jim Dodge which reads as if it should have been published in the 1960s and it has an introduction by one of the strangest writers from that period, the legendary Thomas Pynchon. The books it most reminded me of were Neil Gaiman's 'American Gods' and the Illuminati trilogy. Here the main character is on a strange quest helped by a freaky underground network of crazy scientists, drug-dealers and mystics who are battling and plotting amongst other things to steal some highly valuable weird alien technology thing. It's great fun

PSYCHEDELIC SCIENCE: HOW TO CHANGE YOUR MIND BY MICHAEL POLLAN 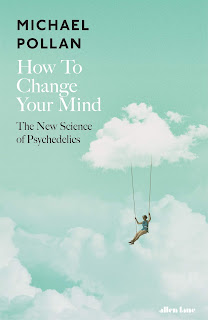 'MIDWAY THROUGH the twentieth century, two unusual new molecules, organic compounds with a striking family resemblance, exploded upon the West. In time, they would change the course of social, political, and cultural history, as well as the personal histories of the millions of people who would eventually introduce them to their brains.


'As it happened, the arrival of these disruptive chemistries coincided with another world historical explosion—that of the atomic bomb. There were people who compared the two events and made much of the cosmic synchronicity. Extraordinary new energies had been loosed upon the world; things would never be quite the same.'


Thus begins 'A New Door'. the Prologue to this substantial work 'How To Change Your Mind' by American writer Michael Pollan. The two molecules he refers to are LSD and Psilocybin. 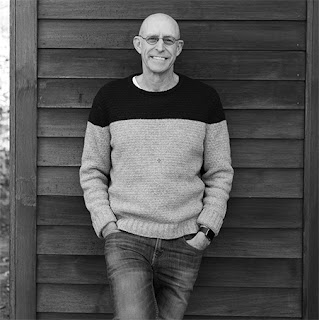 Over the last twenty years, Pollan has become best known for a string of books that connect the human and natural worlds: the ethics and ecology of eating, food and agriculture, gardens and architecture. See list here).

His 2002 book 'The Botany of Desire' contains material on psychoactive plants. Through this research, he was surprised to discover 'a universal human desire to change consciousness'. Pollan admits to have taken some magic mushrooms in his youth  which was more of an aesthetic experience that a full blown trip. So, as he outlines in the book's prologue, he had reached 60 without having had a full-blown psychedelic experience himself or a mystical one for that matter.

The real trigger for writing the book was a 2006 paper from scientists at John Hopkins University entitled 'Psilocybin Can Occasion Mystical-Type Experiences Having Substantial and Sustained Personal Meanign and Spiritual Significance'. Pollan was intrigued by this new frontier between science and spirituality and began to investigate.

His book is essential reading and provides an up-to-date survey of psychedic research and its applications. Firstly he delves into the history. His account of the huge amount of work with psychedelics carried out in the 1950s not only by scientists but also by the CIA contains much information that will be new and surprising to many readers. For instance, in one Canadian state large hospital was devoted entirely to treating alcoholism with LSD. Much of this early research was either lost, ignored or supressed. 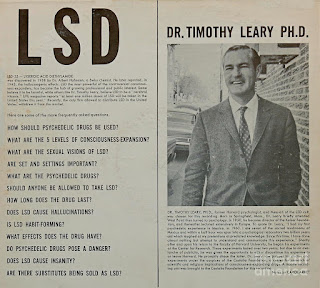 Timothy Leary, the most well-known figure in the field, brought LSD into the mainstream but his efforts to turn the world on also created a moral panic about its effects that led to a complete ban on psychedelic science for more than 30 years.

Now even his critics recognise that Silicon Valley in particular was inspired and developed to a significant extent through LSD use and that Leary played an important role in a much more complicated historical story than has previously been recognised.

There is also a lengthy and detailed chapter on the rediscovery of psychedelic mushrooms, particularly psilocybin and other fascinating fungi.

The new work at John Hopkins and at other US universities signals a renaissance of investigations into the use of psychedelics - particularly psilocybin - for the treatment of depression, addiction and for helping patients with terminal illnesses prepare themselves for their demise. Most seems to lose their fear of death, the drug giving them the realisation that we are part of a connected universe.

Pollan uses psychedelic guides - an undeground network of trained people who can sit with you while you are tripping and help you understand the experience after you land back in the real world. He takes LSD, psilocybin and DMT which comes from a Mexican toad. The last trip is the most dramatic and the briefest - a roller coaster ride. He describes his trips in great detail and the reader can share vicariously his experience.

The book then looks at the latest neurological experiements whereby patients are put in an MRI scanner and given a dose of psilocybin. This allows scientists to see what is happening in the brain when these experiences are taking place.There is now huge confidence that psychedelic experiences can help with many of the world's most important mental problems which we urgently need to address.

There's a valuable review in the Evening Standard  entitled 'How to Change Your Mind by Michael Pollan - review: a man who believes you’re never too old to take a trip' by Richard Godwin.

PREVIOUS POSTS ON THE GENERALIST

Inside Dope: LSD In Britain

INSIDE DOPE: OPERATION JULIE REVISITED
What the Dormouse Said: Counter-Culture and Computing

Read more about Timothy Leary here with a review of 'I Have America Surrounded',
a biography by John Higgs.


INSIDE DOPE: FIRST IMAGES OF LSD EFFECTS ON HUMAN BRAIN