Just heard that Lawrence Ferlinghetti has died at the age of 101. One of the greatest of the Beat poets, creator  and custodian of the City Lights book store. A towering figure whose work will last forever. Almost 20 years ago we managed to get a live internet feed with Ferlinghetti from San Francisco to the Komedia in Brighton. We are hoping to get it up on-line as soon as possible.

This CD-Extra you hold in your hand is an audio and video record of a unique Beat webcast, a live performance at City Lights in San Francisco beamed via the internet directly to a live audience at the Komedia in Brighton on May 3rd 2002.

This webcast was filmed live on DV in San Francisco, encoded and transmitted using RealPlayer software, and sent via the Net to a laptop linked to a data projector.

For more than four years now in Brighton, England, we have been organising events like these which we call 'The New Beat Experience', multimedia 'happenings' with poetry slammed in amongst, bands, singers, digital lightshows, movies and a cool dj. Inspired by the Beat poets of the '50s and the 'Arts Labs' of the old '60s underground scene, we are keeping the vibe moving into the new millennium.

Lawrence Ferlinghetti's performance on that night knocked us all on our ass. The intense anticipation had been building all night as we wrestled with the technology at both ends. We had five bands on the bill; four had come and gone before finally the thumbs-up came and there was the Man himself. His magisterial presence, his powerful intonation, his resonant language burst from the screen. It was overwhelming and emotional.

None of us there will forget it and we are delighted to be able to share the experience with the rest of you out there in beat world. Hope you enjoy the buzz.

Lawrence Ferlinghetti is one of the most influential  and important poets of the Beat generation. Born March 24th, 1919 in Yonkers, New York, he joined the Navy during the War and was sent to Nagasaki just weeks after the Bomb had been dropped and was also involved in the Normandy D-Day invasion.

After the war, he studied at the Sorbonne in Paris and, having finished his doctoral dissertation, went to San Francisco in 1951. He and Peter Martin started producing a magazine called 'City Lights' in an office in SF's North Beach, and decided to open a bookshop on the floor below. City Light's Books, the first all-paperback shop in the US when it opened in June 1953,is now world-famous.

Two years later, Ferlinghetti launched City Lights Books as a publishing company which, in 1956, published 'Howl' by Allen Ginsberg - an event which provoked cries of obscenity, led to his arrest and a landmark First Amendment trial which set an important new legal precedent - allowing the lawful publication of a controversial work if it has redeeming social importance. By 1979, the book had sold 800,000 copies and has been reprinted many times.

Ferlinghetti's own poetry collection 'A Coney Island of the Mind' was published in 1958 and has since sold nearly one million copies and been translated into nine languages. He continues to write and publish and is now the official Poet Laureate of San Francisco.

Just put Lawrence Ferlinghetti in the search box top left for numerous Previous Posts on Ferlinghetti and the Beats. 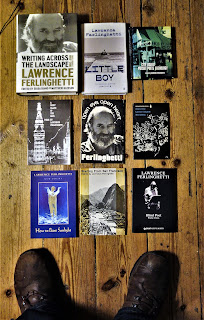