This is a still from the amazing video portrait of GAO XINGJIAN by ROBERT WILSON – a pure and perfect work of art – on the amazing DISSIDENT INDUSTRIES INC site, whose body of work looks extraordinary and exciting. 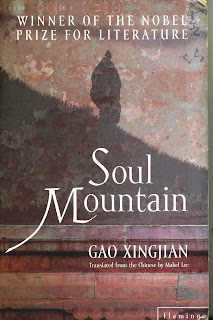 In 2000, Gao Xinjian became the first Chinese writer to win the Nobel Prize for Literature for a body of work that includes this masterpiece which was begun in Beijing in the summer of 1982 and completed in Paris during September 1989. Known also for his plays and his large black and white ink paintings which have been exhibited widely. Out of all his work, since 1987 only one play has been published in China. He is now 72 and is a French citizen living outside Paris.
Following a health scare when he was misdiagnosed with lung cancer and under pressure from the 'oppose spiritual pollution' campaign at the time. 'he absconded to the remote forest regions of Sichuan province and then wandered along the Yangtze river from its source down to the coast'. a journey of 10 months and 15,000 kilometres.
'Soul Mountain' draws on this experience but is also about one man's quest for inner peace and freedom. The book is experimental in style and is made up of many levels of thought and speech which, whilst initially confusing, soon flow into a remarkable river of stories and feelings. Gao writes like a painter and also looks deep into the soul of human nature. Reading this book is a mesmeric journey into both magical landscapes and deep emotions. Harrowing and beautiful by turn, this profound work will touch your heart and inspire your imagination.

‘After the Deluge’ by Gao Xingjian. Source: artnews.org 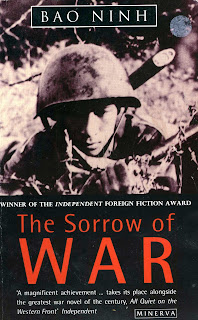 'The Sorrow of War' is a novel about a man writing his experiences of the Vietnam War, written by Bao Ninh who served with the Glorious 27th Youth Brigade of the North Vietnamese army and is one of only ten survivors of the 500 who set out in 1969 to fight the war.
The book's protagonist Kien feels a burdensome debt as if he's 'carrying with him the history of his generation.' and he is forced to relive in flashbacks the horrors he witnessed, scribbling at night as if his life depended on it. The opening jungle chapter catapults you into a visceral, surreal world of darkness and danger - one of many vivid scenes of front-line conflict that pepper a story which also encompasses a intense and tragic love affair. To cut to the chase, this is as powerful, visceral and moving as Michael Herr's 'Dispatches'. It is an outstanding work that provides a valuable insight and perspective on the War from the North Vietnamese side – a much-needed corrective.

MOVIES: THE FILM VS DIGITAL DEBATE


Due for release in the US this month is what looks to be a fascinating documentary, produced by Keanu Reeves called SIDE BY SIDE The Science, Art and Impact of Digital Cinema. Blurb reads:

For almost one hundred years there was only one way to make a movie — with film. Movies were shot, edited and projected using photochemical film. But over the last two decades a digital process has emerged to challenge photochemical filmmaking. SIDE BY SIDE takes an in-depth look at this revolution. Through interviews with directors, cinematographers, film students, producers, technologists, editors, and exhibitors, SIDE BY SIDE examines all aspects of filmmaking — from capture to edit, visual effects to color correction, distribution to archive. At this moment when digital and photochemical filmmaking coexist, SIDE BY SIDE explores what has been gained, what is lost, and what the future might bring.

This is a real live issue. Check it out.

Tribeca: Film vs. Digital in ‘Side by Side’By Mekado Murphy (New York Times). Interview with the director Chris Kenneally.

Movie Studios Are Forcing Hollywood to Abandon 35mm Film. But the Consequences of Going Digital Are Vast, and Troubling by Gendy Alimurung (LA Weekly/ Apr 12 2012)

Rough Trade have come up with a neat Album of the Month scheme whereby you get what they consider the best new release with added RT exclusive extra track or disc, plus the heads up on another nine interesting albums. There’s download options and a no-fuss exchange system. Given the ocean of new music out there, its great to receive a random disc through your door that somebody else has chosen for your listening pleasure

Top left is ‘Manifest!’ by Friends, a Brooklyn quintet who pump out a punked-disco melange of New York sounds, including their two hit singles ’Friend Crush’ and ‘I’m His Girl’. Not blown away but entertained and, after a few drinks, would certainly jig around to it.

Chilly Gonzales is a class act. This is, would you believe, a solo piano record of originality and class. Ideal early morning or late night music. Chill out with Chilly.

Adrian Younge Presents Venice Dawn (great name) on an album entitled ‘Something About April.’ which is ‘an eclectic mix of heavy, psychedelic soul and soundtrack-ready instrumentals’ according to their label Wax Poetics. I’m grooving to it as I write these words. 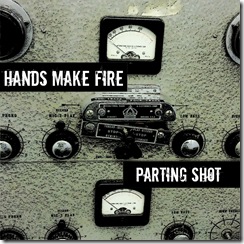 I have son Louis to thank for this thoughtful gift so here’s a shameless plug for the first single from his new band Hands Make Fire featuring ‘Parting Shot’ and ‘Waiting for the Echo’. Released yesterday, check it out on I-Tunes.

This unusual xtra-large format comic compilation is legendary in the comic book world as it took some 40 years before it was finally published in 2011 by Abrams ComicArts. It's creator Michel Choquette was originally commissioned in the early 1970s by Jann Wenner, publisher of Rolling Stone, to produce a comic supplement for the magazine on the 1960s. When the project expanded it was going to be a book published by Wenner's Straight Arrow Press. Then the whole deal fell through. The full saga of what happened next is fully documented in the links below.
What makes it so special is the line-up of writer's and artists who produced work for the project - 169 in total from 15 countries including Tom Wolfe, Frederico Fellini, William Burroughs, Jack Kirby, Tuli Kulferberg of The Fugs, Frank Zappa, Art Spiegelman, Ralph Steadman, Pete Townshend, Goscinny and Urderzo of Asterix fame and Will Eisner.

Pleased to see work in there by several comrades from the British underground press including Mick Farren and Edward Barker, Malcolm Livingstone, Richard Adams and Roger Hutchinson.

Now available at a reasonable price from your usual internet outlets, its a valuable international showcase of a wide variety of comic and graphic talents from the 70s, each bringing their own style to the book's grand theme.

Review by Dan Nadel in The Comics Journal

Email ThisBlogThis!Share to TwitterShare to FacebookShare to Pinterest
Labels: comix 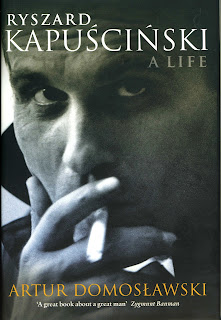 'To what extent may one distort reality in order to reach the deeper truth that refelects the 'heart of the matter'? Where are the lines that mark the borders between fiction and non-fiction? By introducing elements of invention, by processing reality, do we shift our text from the 'journalism' shelf to the one marked 'literature'? Is literary reportage - as Kapuściński thought....a legitimate literary genre...?'

These questions haunt this  truly remarkable biography of an extraordinary writer, hailed by the likes of Salman Rushdie as one of the great foreign correspondents of the 20th century but whose reputation since his death in 2007 has been seriously besmirched by revelations that he fabricated many of the facts and accounts in his most famous books and embellished the story of his own life.

I was the first British journalist to interview Kapuściński when he arrived in the UK for the publication of 'The Emperor'. In 2007, I wrote a series of posts about the various meetings I had with him in London - at one of which I had the pleasure of introducing him to Bob Geldof, at another we met at the Royal Court Theatre and saw a performance of 'The Emperor' directed by Jonathan Miller - and about our correspondence over several years. There is also a reprint of the piece I wrote about him for 'The Face'. In 2011, I wrote a piece about this book (sight unseen) and collected a great many links which followed the original Polish publication of the book.

All the above is accessible from this Previous Post: Kapuściński Revisited.

That post, in turn, links also to a further series of investigative posts on Truman Capote's 'In Cold Blood' - widely and wrongly hailed as the first non-fiction novel. As the years have past, the 'factual' content of the book has been seriously questioned and it is now clear that much of the work was the product of Capote's heated imagination. In other words, a useful historical parallel to the Kapuściński story.

I call this book remarkable for a number of reasons. Firstly, Domosławski, a personal friend and a celebrated journalist in his own right, considered K a maestro and a mentor so it was with growing unease that, following K's death, he uncovered the secrets of both K the man and K the writer. The scrupulouseness of his investigation threatens the reputation of a man he loved and admired.

He writes: 'Not for the first time I catch myself fearing that, without meaning to write an expose, I am discovering facts about the master's life which I would rather not know at all, and that I am creating a platform for massively negative opinions of him.'


Secondly, the translation by Antonia Lloyd-Jones is especially good as it captures the Polish style of prose, full of author's thoughts and rhetorical questions, which makes this intimidatingly long and detailed book really fascinating, unexpected and gripping to read.


Thirdly, Domosławski sets K's adventures - he is always the real centre figure of his books - in the broader context of the extraordinary birth of the Third World that K witnessed at first hand and the modern post-war history of Poland.

K was an enthusiastic communist until 1981, had friends in the Central Committee and wrote briefing papers and reports of utmost fidelity and factual accuracy for various branches of government. His groundbreaking expose of working conditions at the Nowa Huta steel works won him national acclaim and gained him the golden opportunity to travel the world.


The books that emerged from these experiences were written in a powerful literary style, a form of 'New Journalism' that was compelling, visceral, atmospheric and fresh. For obvious reasons Domosławski's revelations have seriously affected K's standing in the eyes of his fellow journalists for betraying his profession -  which he told me personally was, in his eyes, 'a vocation.'.

Yet despite K's conrfabulations - he may have met Salvador Allende but he certainly didn't meet Che Guevara or Patrice Lumumba as has been widely claimed - there is still a wealth of excellent reporting and writing that will survive as great literature.

What he was certainly great at was 'capturing the essential mechanisms of any authoritarian power'. After all, he did witness twenty or so revolutions, uprisings and coups d'etat in the Third World. Both 'The Emperor' an 'Shah of Shahs' can also be read as metaphors for the reality of the Polish political structure which he was so adept at working within. He told me personally: "Human nature doesn't change that's why Machiavelli and Shakespeare are contemporary works."


Thanks to Domosławski, we now see K as a real-life complex figure - traumatised child, unfaithful husband, absent and cruel father, passionate communist - and as his own fictional creation. Finishing the book, walking through K's personal library and following K's final notes on his last journey to another world, one is left with a profound sense that his exploits and writings will continue to fascinate far into the future.


'Ryszard Kapuściński : A Life' by Artur Domosławski is published by Verso Books.

See also: Interesting audio assessment of the book on The Economist website: http://www.economist.com/node/21557299