HISTORY OF ART: WILL GOMPERTZ/ROBERT HUGHES 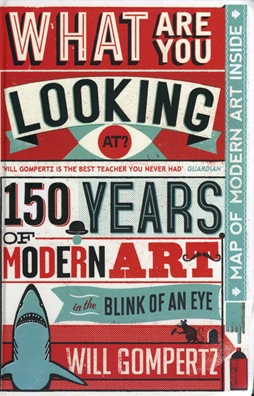 Let me begin by saying I am not the average reader of this book. I have been reasonably obsessed by the history of art since I was at school (a long time ago when, on school trips I first saw Ucello Brueghel, Pollock and Dali – all of which blew my mind).

In recent years I have spent an inordinate amount of time on three projects – one to find a diagrammatic way of representing individual artistic groups, second to find a way of mapping the history of art and three, collecting together pictures and paintings of artistic groups for a proposed book project. Thus when this new book appeared I devoured it in a couple of days.

Gompertz was a former director of Tate Modern, responsible for their website and the Tate Magazine and is now head of BBC Arts. A thin voluble character with large specs and  flyaway hair, judging by a promo video on YouTube, he did a stand-up whiz through on modern art at the Edinburgh Festival which led to the commission for this book.

The book is, as you would expect, a chronological journey through the main artistic -isms of the last 150 years prefaced by one of his main treatises – that much modern art stems mainly from one man – Marcel Duchamp and his infamous urinal (signed R. Mutt and titled ‘Fountain’), a ready-made everyday object that by being exhibited in an art gallery became art. Thus art was no longer about painting on canvas or making sculptures but could be anything you could think of in any medium.

This is certainly the most accessible and unintimidating popular history of art available and is a great starting point as an introductory text to this fascinating subject. Its very readable, packed with interesting stuff and I learnt a lot by reading it.

I suspect his audience may be divided between those who would consider this work a dumbing down of art history and others, probably a younger readership, who would find his approach excellent and invigorating – and funny. They will, I think appreciate his contemporary references and jokey analogies and his determined attempt to blow the dust of art history and try and bring it to life for a contemporary audience. He writes: ‘There are times when those of us involved in the arts talk and write pretentious nonsense. Its a fact of life: rock stars trash hotels, sportsmen and women get injured, arts folk talk bollocks.’ His attempt to demistify the impenetrable and communicate his undoubted enthusiasm for his subject are to be applauded.

Now here come some caveats as the book is not without its problems which are worth examining, the most important being the relative shortage of illustration – limited to two 8pp colour sections, 39 black and white illustrations peppering the text and some very weak cartoons. This means that Gompertz has to describe in words a great many of the artworks he talks about which can get tedious and are difficult to visualise particularly if you haven’t seen the original before. There is also not a single picture of any of the artists themselves. Presumably the publisher would argue this is to keep the price down to make it affordable. The hardback edition as it stands is £20.

The book contains a fold-out which uses the London tube network graphic as the basis for mapping the art history the book contains  This time-honoured informational graphic has been used so many times to chart other subjects as well that it has become a bit of a cliché. But it works well with book to underline its strengths and weaknesses.

To follow the analogy, this is a main-line view of art history. The bid to create a strong narrative arc inevitably leads to simplification in the service of creating a tidier story – dominated by great men (Gompertz devotes one chapter to women artists), key moments, art groups and the –isms.

In actuality, a better model for the history of art would be a biological one – perhaps an unruly unpruned irradiated bush with thousands of interconnections growing from numerous root stocks which as it grows, mutates into unexpected formations and cross-pollinates with other plants to produce strange new fruit. (the intertwined nature of art and photography is still waiting to be properly evaluated and communicated).

The book ends with BritArt,  discussed in a fairly non-critical fashion, and the rise of street art (and, inevitably Banksy). Gompertz believes now that modern art is very market orientated and is dominated by a new –ism: Entrepeneurialism (a term he has personally coined) with its new emperors being  artists like Damien Hirst and Jeff Koons and  the ‘Big Daddy’ of contemporary art dealing Larry Gagosian, who now has galleries in New York, Beverley Hills, Paris, London, Hong Kong, Rome and Geneva.

In a significant paragraph Gompertz writes:

‘For the most part, contemporary art has been devoid of a hard political edge, save for the odd intervention that has generally had the look of a bandwagon hastily being jumped upon. On the whole, even when the avant garde artists of our age have been at their most aggressive and challenging, they have tended to present their work with a cheeky grin rather than an angry scowl. The inclination has been to entertain not campaign. The big shifts in society that have taken place over the last twenty five years have been largely overlooked by high-profile artists.’ 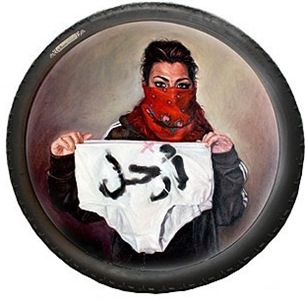 This may be true at high-end of art but it certainly is not true in general terms. What the book lacks is a real understanding of the impact of digital technologies on art making practices, forms and styles. It also ignores the flood of work now emerging from Brazil, India and Egypt to name but three. Increasingly multimedia in form, totally global, permanently connected and fully engaged with the problems of our time – both aesthetic, cultural and political – the new art defies easy classification as its struggles to find ways of describing our post 9/11 world. Rauschenberg famously said something about that apocalyptic moment, that it was the greatest work of art created by the Devil. Time to bring on the angels.

Having given Gompertz his due, you’ll be thirsty for the deeper insights, wise judgment and sonorous language of what I and many others consider the greatest art writer and critic of our time – the recently departed Robert Hughes who died in August this year.

Fortunately all the episodes of his classic tv series ‘The Shock of The New’ are now available on YouTube. As is the remarkable ‘The New Shock of The New’ made in 2004. Everything that is good about Hughes is in this programme which starts with 9/11. Enjoy. 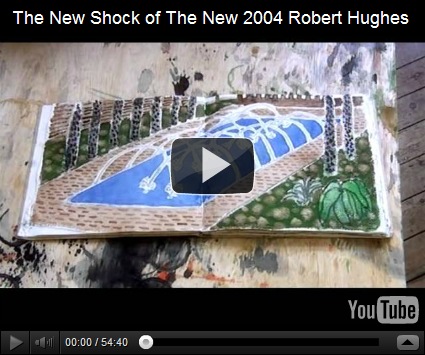