Here at The Generalist Archive we love things like this email which arrived out of the blue from Rob Godwin in Toronto.

'Just watched your talk at the Printing conference on Youtube. Really interesting. It made me decide to reach out to you.[I didn't know at that time that a talk I'd given at the University of Westminster about mimeograph printers and the Underground Press had been filmed.]

'We have a few things in common. I briefly worked with Lucasfilm, ran Hawkwind's record label in the USA for five years, I have a pretty good collection of Friends/Frendz going way back to my misspent youth. I write and edit for a living, including books on science, spaceflight, science fiction and music. I'm also a historian on various aerospace history committees.

'About two years ago I decided to start writing a paper (not a newspaper, but a "paper" to submit at a conference) about the crossover between the Space Race and rock music in the 60s and 70s. The limit for such a paper was only 15 pages, and by the time I got to 50 pages I knew it would likely never see the light of day. However, I can't give it up because it has become too much fun. It roams around between primitive astronomy, pirate radio, underground press, alternative clubs, Kubrick, Ginsberg, Stockhausen and of course Hawkwind.

'I've drilled down to the point where I realised that Space Ritual was the nexus for all of this stuff and it has become the focal point of my essay. I believe you were on the road (and the stage) for some of the early shows.  I read about you in a copy of The Snail (I think) from the start of the tour. I missed the Space Ritual tour by a few weeks (I was at a show in Southampton the previous August). I wondered if you might share any anecdotes about those nights?'
All the best
Rob Godwin
(Toronto/Canada)

A day or so later we had at least a two-hour phone conversation which was followed by an exchange of further messages over the following weeks.

First stop was Rob Godwin's Wikipedia entry which is impressive and extensive and complete with References and numerous External Links. Rob set up his own music business and publishing operation and produced a large number of books and publications on space and music.

In 1998, at the invitation of astronaut Buzz Aldrin, Godwin would begin his imprint Apogee Books.

Action on TV/Video and web

Rob promised to send me two books both entitled '2001: The Lost Science'. Some while later a large package arrived from C.G. Publishing, 2045  Niagara Falls Blvd containing the two oversized books. 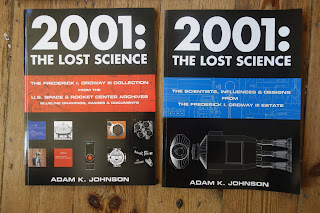 You can purchase copies here: