The Luck To Be Astonished In The Right Place 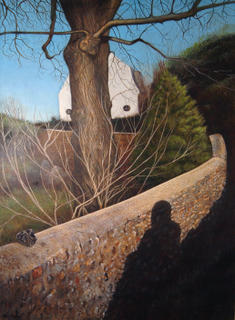 It’s not often that you see a painting that you desperately want to own, something that you could happily live with for the rest of your life and still get something from it.

But that was the case with this picture – 'A Heart Shaped Flint' – by Peter Messer, whose recent exhibition in Lewes took it’s name from the alleged quote of one of Van Dyk’s patrons, who said he felt ‘the luck to be astonish’d in the right place,’ as he stood in front of one of the artist’s paintings. I felt the same.

This picture says a lot to me about Sussex in general and Lewes in particular - and I love flints and shadows. Like most of the pictures in the exhibition, it is derived from things seen, imagined and remembered during the short daily walks that Peter takes between his house, studio and allotment. There is an intensity of subject and feeling, captured, identified and rendered in high fidelity but with a magic, sometimes surreal edge. Standing alone in the small stone brick gallery, looking around me, light seemed to pour out of the pictures.

Peter writes about his work: 'I sometimes have difficulty in distinguishing between what I see - or think I see - and what I dream, invent or read. Everything seems to find its way into the same mental cupboard where it is retrieved, or tumbles out of its own accord, at a later date. As my visual memory is quite retentive, paintings are seldom immediate but tend to proceed from an internal ruminative process ... Some pieces I devise like contraptions while others seem almost to seek me out.' 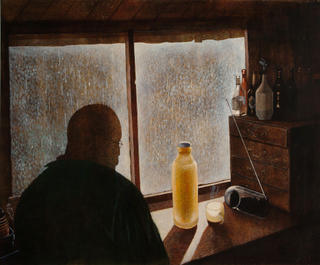 'The Flask' by Peter Messer


BIOFILE: Born in 1954 in Brighton, Peter Messer studied Fine Art at the University of Brighton. He works mainly in tempera on a traditional gesso ground and has exhibited in solo and group shows in the UK, US, Germany and France His work has been frequently exhibited at the Royal Academy Summer Exhibition and the New English Art Club and he has been a finalist in the Garrick Milne and Hunting Prizes and his work is in private collections in the UK, France, Germany, Holland, Belgium, Sweden and the US.

In 1988 he won the Chichester Art Prize and in 2000, was commissioned to provide twelve paintings for the ‘Sussex Book of Revelations’, an Arts Council Millenium Project which toured Sussex libraries. In 2004 he completed a commission for the House of Lords. Since 1992 he has also been awarded several NHS Trust mural commissions and is currently preparing a mural scheme for the Royal Sussex County Hospital's Link Corridor. At a total length of some 80 metres, it is thought that this will be the biggest modern tempera painting in the UK.