Jeff Nuttall: Bomb Culture and Beyond 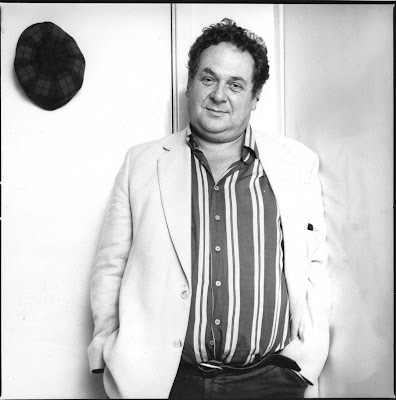 Jeff Nuttall at the Chelsea Arts Club on 4th November 1985.
Photo by Ed Barber (Copyright Reserved)
First publication
Jeff Nuttall was the first proper artist I ever met. Way back when, at the tail-end of the 1960s, he came to give a talk to students at the local art college in Worthing and I got in on it. As I recall it now, he breezed in the lecture hall, wearing a long brown check overcoat and loose scarf and, will little ado, sat up on the front table (rather than taking the chair), said ‘I’m Jeff Nuttall and I’m going to read to you from my new book ‘Pig’”, loosened his coat, and was off for the next couple of hours. It was brilliant. I loved his irreverence, his speaking voice, the gusto and non-pomposity of it all. Even better, after the reading, a gang of us went with him to The Wheatsheaf and I got to talk to him some more. The details have passed into the mist but it certainly strengthened my determination to try and avoid the normal workaday world and be an artist. I succeeded – but at a cost.

Then I read ‘Bomb Culture’ – one of the great books to come out of the 1960s – a vibrant and thrilling account of the internationalist counter-culture in Britain and the effect that the shadow of the Bomb had on the post-Hiroshima generations. It remains an important book and a big impact on me. Still one of the best books for getting a taste and flavour of the real underground scene.

There was of course much more to Jeff than that. He was a poet and singer, played jazz piano and cornet, published some 40 books in his lifetime, performed cameo roles on film and tv, founded a rabble-rousing improvisational theatrical group called the People Show and was, in the words of Michael Horovitz, ‘a catalyst, perpetrator and champion of rebellion in the arts and society.’

It was December 1984, some fifteen years after our first meeting, that I met up with Jeff again under very different circumstances. It was a dingy night at the Chelsea Arts Club in London and I had come with photographer Ed Barber, to record an interview with Jeff, as part of a series of pieces I think I was trying to do for 'Time Out' magazine on ‘Bomb Culture’ revisited. After hanging round in the bar downstairs for some time, we were ushered up to the Hancock Room, where Jeff was staying for the night.

The room, named after Tony Hancock I presume, was small and shabby, classic theatrical digs. Just enough room for a bed, a basin, a chair and the rotund figure of Jeff. Ed struggled to get his tripod and other camera gear in the door and we all ended up crammed together. To make it even more intense, Jeff was not in a happy mood. After the successes and energy of the 1970s, things had not gone well and Jeff, disillusioned and professionally ostracised, retreated to Portugal. This it seems, was the first interview he had given to the British press for years. He let me have it full bore. Vitriolic and intense, it was as if I was personally responsible for the situation. Very uncomfortable. Afterwards, sitting in the car, Ed and I breathed a great sigh of relief to get out of that room. Of course, as a result, it was a great interview and a great photo (see above).

The following extract from my interview was included in the book ( as follows) with a slightly different audio version on the record:

JM: What were the circumstances that led you to write ‘Bomb Culture’?
JN: I’d had a couple of preliminary stabs at it and then I went on holiday to Wales and suddenly it all fell into place: the three strains – the pop strain, the protest strain and the art strain – and the merging of them in some kind of movement that felt that everyone of these three strains had something to offer in the state of emergency - which was the failure of CND. It became clear in the early 1960s, that massive crowds and massive civil disobedience were ineffectual and nobody in Parliament was bothered about them one iota.

Several people came up with the idea of cultural warfare, of seeding pacifist and subversive elements in the popular culture. The popular culture having been almost purely a commercial enterprise previously (if you can say purely commercial), art not being concerned with being popular at all, and protest eschewing art as though art were self-indulgent and were not sufficiently puritan, not sufficiently ethically motivated. Just for a while they merged and that was what Bomb Culture was all about, and I happened to be around while it was merging. I wrote it in 1967, which was the year of mounting protest against the Vietnam War, and 1968 was the student upheaval. In Paris, as everybody knew at the time – though people have kind of forgotten – they did open prisons and burn the stock exchange and it really did look as though this was it, this was spontaneous revolution.

I was very much concerned about the Bomb, and about sowing this element of dissent into the popular culture, that would ultimately lead to inevitable disarmament and probably the dissolution of nations, and the setting up of a common human consciousness. We all believed it then you know! It looked as though it was bloody near inevitable, because the change in thinking and the change in culture between ‘65 and ’67 was amazing.

Hunter S. Thompson talks very eloquently about how it all seemed completely inevitable, the victory was there, it was just a question of letting it happen. So my writing Bomb Culture was a signing off from it really, a kind of retraction to going back to writing poetry which was concerned with poetry and concerned with the interpretation of a highly personal vision, and making art which owed nothing to anybody and didn’t have to contain any kind of message at all.

JM: You talk in Bomb Culture about the gap that’s opened up between the generations in the atomic age.

JN: The gap is between those people who have experienced a notion of the world as a continuum and those people who have not had that experience. I don’t want to be patronising or come on like an uncle, but I think I can remember up until 1945 believing that one way or another there might be some awful things that would happen, but the world would continue. That whatever went wrong, in the fullness of time, it would eventually come right. You can’t remember that. You might wish to remember it. You might be able to imagine it. But I can remember when everybody believed it. I think this has done something quite disastrous to social ethics.

JM: Is the Bomb shaping artistic consciousness all over the world?
JN: What one wants from a Bomb-conscious artist is an antithesis to the Bomb. One wants opposition to the Bomb, and one can’t have opposition to the Bomb which in itself has its roots in the existence of the Bomb. What one actually wants from one’s artists is gestures and statements and experiences that are going to perpetually put before humanity, before the public, before society, a way of thinking, which is not part of the internal, competitive, war-power system.…..You have to overcome the difficulty of loving your state, your condition. Anybody can look at a sunset and say goo goo goo, how nice, or cuddle a baby, or fall in love with a pretty girl or a pretty boy. That’s the easy bit. The difficult bit is somehow loving a state which includes the obscene and the vicious and the dreadful and the painful and loving that. Really loving it, not tolerating it or blessing it or forgiving it or putting up with it or grinning and bearing it, but really loving it as being an integral and unavoidable part of the kind of creature your are and the state of existence you inhabit.That’s where I stand at the moment. Far too much, somewhere hovering behind the existence of the Bomb, is the notion that…it’s not worth saving. It’s so disgusting, it’s so foul, so corrupt, it’s so old and so boring and its so diseased that you might as well…

JM: Just wipe it clean ?
JN: Yes. What you’ve got to really do is create some kind of cultural movement which would be against that. How it’s to happen now I really don’t know. I don’t feel despairing because I think that – I’m 52 now – I really didn’t expect to see the age of 30.