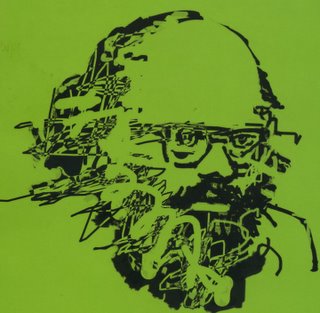 Some of the best things you ever come across, someone tips you off over. Yeah, the internet, blah blah, digital stuff. So’s anyway, it was Flo that tipped me the wink and Route books up north who came through with a review copy of this here compact green-covered volume that I, in turn, am about to hip you to. Thus passing on the favour, if you follow my drift or, at least, my general direction.

HOWL FOR NOW is the book of the event staged in Leeds to celebrate recently the 50th anniversary of the first reading of Howl by Allen Ginsberg on oct 7th 1955 at the Six Gallery in downtown San Francisco in front of an audience of poets, hipsters and other such, including Jack the Kerouac and others. The audience was transformed.

We have seen the best minds of our and subsequent generations being destroyed by various means since that time and the Poem and the Poet have since been righteously, realistically recognised by all and sundry and judged to be one of The Biggest of Big Deals as in 20th century masterpiece kind of stakes.

Howl is read a lot still by young people all over the world and that seems to be the most important thing, it being a great shout of exuberance, insanity and protest against the VERY BIG THINGS that are fucking up our world, So that’s why Howl will always be a contemporary book in the way those old ancient Greeks are and why it was a good idea to celebrate this recent anniversaire with some kind of Beat Bonanza.

I wasn’t there but I’m pleased to learn that the film maker who made the multi-media-movie of Andy Warhol’s 1966 ‘Exploding Plastic Inevitable’ event is currently editing footage of the Howl for Now performance, held at the School of Music at the University of Leeds, for release next year so that we can all see what went on.

In the meantime it is my pleasure to heartily recommend this Route book which contains essays by some of the key players, organisers and hipcat heads involved. I more or less read the whole thing in one big gulp (accompanied by three pints of the new Irish Guinness that is in town, and listening also through both ears to the conversation of the Czech barmaid and the jukebox which was on random shuffle.

Let’s be straight about this, as in I found this a crackerjack book in the sense that each essay gave me something, triggered a thought-stream, made me sit and ponder, intrigued me in some way or other.

So without further ado, here is the line-up: begins with old-time beat David Meltzer, still operating in the Bay area, who sets the vibe in two pages in a jazz riff called Howling Wolves.

Next up Steven Taylor’s ‘the poem and I are fifty’ which recounts the times when he played guitar with Ginsberg and, more importantly, gives us real sense of the real stuff that made up Allen Ginsberg, brings him to life for the reader in a cool and touching manner.

Simon Warner, editor of the book as a whole and a kinda mastermind-type character in the whole howl-for-now scenario, broadens out the focus in ‘Sifting the shifting sands: Howl and the American landscape in the 1950.’ This is totally fascinating wake-up, showing how the Beats and Be-bop intertwined, how Howl and Rock around the Clock coincided, pulls it all together.

You’ve just recovered from that, had a pause, a half-pint, a bit of a think when George Rodesthenos bats you right on the button with a powerful piece on Rimbaud and Ginsberg, about bodies and nakedness and much else. Through this, discover new poet Constantine Cavafy (1863-1933) who I already love and am no longer immune to.

Then come the interviews – with Ronald Nameth, formerly mentioned filmmaker, godfather of modern multimedia, about the Howl for Now event and film and then also Bill Nelson talking about the soundtrack front.

Sandwiched between (appropriately), another cross-dressing cultural exercise by Michael Anderson – ‘The visual arts and Howl: painters and poets in the American 1950s.’

Get the general drift – I loved it all. The publishers Route are based in Pontefract and seem to be up to lots of other good things also. Check them out on http://www.route-online.com/ and buy this book. And have a howl for now, for God’s sake or anybody else’s.


PS: For those who find the style of this review irritating, you haven’t met my barroom buddy Hip Flipster, Beat Poet.
at 5:10 pm