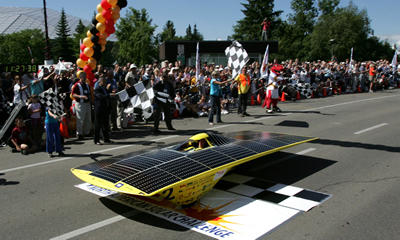 The University of Michigan solar car crosses the finish line amid some 10,000 spectators at the University of Calgary in Calgary, Alberta , Canada to win first place during the 4,000 km (2,500-mile) North American Solar Challenge, Wednesday, July 27, 2005. Michigan made the trip in 53 hours, 59 minutes, 43 seconds and set a record by averaging a speed of 46.2 mph in the world's longest solar car race from Austin, Texas to Calgary, Alberta, Canada.

In Sepetmber 2005, a Dutch team in Nuna 3 beat 19 other competitors in the four-day 1,190mile World Solar Challenge race in Australia - their third consecutive win. They crossed the finish line in 29 hours and 11 minutes and averaged a speed of 63.85 mph.

A PDF of the article is exclusively available from this site, by agreement with Simon Fullalove, Editor/ICE Proceedings. Simply drop me an e-mail request.

Sharman writes: ‘Britain’s wind power reached 1 GW in June this year, making it the eighth largest national installation in the world. Over the next five years a further 6 GW is likely to be built at a cost of £7 billion in the rush to meet the Government’s target of 10% renewable energy by 2010.

'The plan is for wind energy to deliver three-quarters of the target but that, as this paper explains, would actually require 12 GW, meaning the target will not be met. Furthermore, experience in Denmark and Germany shows that the UK will find it impractical to manage much over 10 GW of unpredictable wind power without major new storage schemes or inter-connectors.

'The paper concludes that while wind power should be exploited as fully as possible, it must not be at the expense of renewing existing firm generating capacity.’

This practical limit to the adoption of wind energy in the UK is well below that currently planned up to 2020, and Sharman believes that this limit should be sensibly reached in offshore locations, where wind speeds are higher and where the wind turbines can be brought in closer to major centres of load, thus reducing the need for extensive, uneconomic, grid expansion which is ecologically damaging (such as that currently proposed throughout Scotland).

This article confirms findings in the E.ON Netz Wind Report 2005 which states: 'The inescapable conclusion to be drawn from the German experience is that the unsophisticated nature of the UK's Renewables Obligation is driving us towards an irrational over-commitment to an unreliable and extremely expensive energy source with an extremely large and deep environmental footprint. A rethink of both the conventional and renewable energy policy is obligatory. '

According to John Constable, Policy and Research Director for the Renewable Energy Foundation said: "At a time when the UK should be addressing its need for reliable generation, we now see from European data that wind is unable to contribute any significant firm capacity to the power portfolio, and offers only very expensive fuel saving and emissions reduction…A review of UK renewables policy is now unavoidable."

IN A RELATED STORY: The global wind industry has reached a 50 GW milestone of wind energy capacity installed worldwide, with an increase in total installed generating capacity of 20% over 2004, said representatives at the Global Wind Energy Council's (GWEC) Windmasters Dinner in Husum, Brussels on 22nd September 2005.

'Wind Force 12, a blueprint to achieve 12% of the world’s electricity from wind power by 2020' is an annual global wind energy assessment that has been conducted regularly since 1999. The 2005 report has been completed by Greenpeace and EWEA on behalf of the GWEC.

The International Energy Agency estimates that under current trends, the world’s electricity demand could double from 2002 to 2030. The global power sector requires 4,800GW of new capacity to meet increasing demand and replace aging infrastructure, at a cost of €10 trillion in power generation, transmission and distribution. By 2030, the power sector could account for 45 per cent of global carbon emissions.

BIOMASS
On 25th October, the Biomass Task Force presented the results of a year-long study, commissioned by DEFRA and the DTI, which concludes that biomass (fuel from forestry, crops and waste) could reduce the nation's carbon emissions by almost 3m tonnes a year if used to provide heating. The carbon saving would be the equivalent of taking 3.25 million cars off the road.

The Task Force’s Chairman Sir Ben Gill said: 'What many see as tomorrow's fuel is here today. We estimate there could be 20 million tonnes of biomass available annually. The challenge for the Government now is to unlock this vast potential. We have suggested several ways to develop this industry which has a vital role in climate change, sustainable development throughout the country and economic activity in rural areas.

'Heat has been the forgotten part of the energy debate - enough waste heat is emitted from our power stations to heat the country one and a half times over - but our findings show that producing heat either alone or in Combined Heat and Power plants is by far the most efficient way of using biomass.

'There are many renewable sources of electricity but biomass is the only widely-available source of renewable heat. Heat generation accounts for 40 per cent of our national energy consumption. At a time of rising oil prices, biomass heating is fast becoming an attractive economic option. And it is a cheaper way of cutting carbon emissions than many other options.'

The Task Force makes 42 recommendations, including a call for the ntroduction of capital grants to fund more biomass heating boilers ad says that public buildings can be the ideal place to begin the expansion. It concludes that one of the biggest barriers to progress s ignorance and recommends that the Government acts in the next six onths to create a single information point on biomass for the ountry as a whole as well as delivering on its promise in the 2003 nergy White Paper to lead by example in its own building stock.

The full report is published at:
www.defra.gov.uk/farm/acu/energy/biomass-taskforce/index.htm


NATIONAL RECYCLING AWARDS 2005
The winners were announced 25th October in Sheffield. They include the following:

Somerset Waste Partnership won Best Local Authority Initiative, for their Sort It! Programme, which ncludes a weekly collection of recycling and food waste, fortnightly refuse collections and optional charged garden waste collections using wheeled bins or compostable sacks. Overall recycling rates have more than trebled in collection areas from 14-18% to 50% and the amount of refuse collected for disposal has halved.

Balfour Beatty Rail Track Systems Ltd won Best Industry Recycling Initiative. The Company, which supplies railway castings to Network Rail and other railway projects worldwide, sourced organisations willing to incorporate the company's waste into their products or take it for further processing and recycling. Process waste is now used in concrete blocks, cement manufacture, Tarmacadam production and hardcore, while other materials such as cardboard and wood are segregated for recycling. As a result the volume of waste disposed at landfill has been reduced from 2,750 tonnes per annum before the project started to just 25 tonnes per annum.

Comet, Wincanton and Remploy won Best Partnership Project for Recycling, for their "reverse supply chain solution" for waste electrical electronic equipment such as used televisions and toasters. Comet worked with its logistics partner Wincanton to develop a collection service and establish sorting centres, and approached social enterprise organisation Remploy to refurbish the better quality white goods for onward use in the community. Following successful trials in 37 stores last year, Comet has announced a national roll out of the scheme and anticipates receiving up to 500,000 used electrical items for recycling or refurbishment each year.

EnviroSystems (UK) won Recycled Product of the Year for the animal bedding material it has developed using recycled by-product from paper mills. Envirobed, which took two years to develop, is soft, cost-effective and is already being used for 50,000 dairy cows across the UK. It offers benefits over traditional bedding materials such as straw which can suffer from fluctuating supply and risk of disease.

HMYOI Wetherby won Waste Minimisation Project of the Year, for its forward-thinking waste management plan which included the creation of 16 trainee jobs and the provision of a fully accredited educational course in waste management for staff. HMYOI Wetherby is now considered one of the leading prisons in the country in terms of waste minimisation.
For more information see: http://www.nationalrecyclingawards.com/

PATIO HEATERS
According to Leo Hickman in The Guardian, questions were put to Environment Minister Elliot Morley in parliament this summer ‘asking how many patio heaters there are now in the UK, and what damage they might be doing. The answer given was 630,000 in use in homes and between 26,000 and 105,000 in the hospitality sector. According to the figures from the Market Transformation Programme, an agency that supports the government in developing a policy on sustainable products, the total energy output by the UK's patio heaters is between 950 and 1770GWh (gigawatt-hours). Or in terms of annual carbon dioxide emissions, between 200,000 and 380,000 tonnes. That roughly negates all the savings in CO2 emissions made in 2003 after pollution-reducing company car tax reforms were first introduced.’

BIOFUELS
The International Energy Agency's report Biofuels for Transport: An International Perspective suggests that 50% of world transport could run on biofuels by 2050.

“In the absence of strong government policies, we project that the worldwide use of oil in transport will nearly double between 2000 and 2030, leading to a similar increase in greenhouse gas emissions,” said Claude Mandil, the organisation's Executive Director. 'Biofuels, such as ethanol, biodiesel and other fuels derived from biomass could help change this picture, by offering an important low-greenhouse-gas alternative to petroleum over this time frame.'

ENERGY RATING BUILDINGS
The European Energy Performance of Buildings Directive came into force in January 2003. Member states have three years to implement its recommendations. It means that commercial,public and private buildings of all kinds will be given an energy rating and encouraged to improve their building's efficiency; low ratings will certainly affect the valuations of properties, is expected to have a profound impact on the commercial property sector and will trigger off a big cost to landlords.

The buildings sector accounts for 40% of the EU’s energy requirements. It offers the largest single potential for energy efficiency. Research shows that more than one-fifth of the present energy consumption and up to 30-45 MT of CO2/Y could be saved by 2010 by applying more ambitious standards to new and when refurbishing buildings – which represents a considerable contribution to meeting the Kyoto targets.