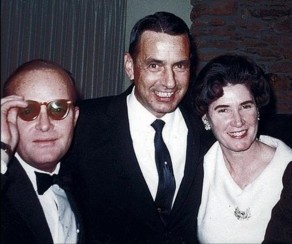 Truman Capote with Alvin Dewey Jr, the Kansas Bureau of Investigation's lead detective on the Clutter family murder case and his wife Marie.
'Dewey gets much of the credit for an investigative effort that involved law enforcement agents from Washington, D.C., to Nevada. But 45 years after the Clutter murders in Holcomb, it's difficult to separate where Dewey's involvement in the case ends and other lawmen's begins. Furthermore, for all Dewey's experience, some Garden City, Kan., residents are critical of his relationship with Capote and how that affected what ended up in the book.' Full story here.
Belatedly, I sat down to ‘Capote’ on Sunday afternoon and now look what’s happened. I can’t stop thinking about it. Let’s get one thing straight right away. I hate biopics, hence my reluctance to see this film. However Philip Seymour Hoffman does a great job, for which he won the 2006 Best Actor Oscar, the script, based on the 1988 biography by Gerald Clarke, is well-crafted, its elegantly shot and well-directed. The character of Harper Lee, played by Catherine Keener, is beautifully drawn and strikes a perfect note in the unfolding drama. There are false notes but not many. By and large, it works.

History tells us that ‘In Cold Blood,’ – the writing and researching of which is the subject of this film – was the first nonfiction novel and blazed the trail for what has come to be known as New Journalism (see previous posting: The Archaeology of New Journalism). If one wanted to be flippant, you could certainly says it certainly launched the true-crime market.

More importantly and interesting to me was the fact that Capote claimed to have 94% recall of conversations and never used a tape. So how non-fiction was this breakthrough book? Had the years since the book's publication and the author’s death in 1984, revealed new insights as to the veracity of Capote’s account?

A good place to start is in an early chapter of Marc Weingarten’s Whose Afraid of Tom Wolfe ?, which carries an interesting four-page account of the making of In Cold Blood. It confirms that Capote never tape-recorded or recorded any conversations during his six years of research but, for much of that time, Harper Lee (actually Nelle Harper Lee), worked as his stenographer. After each day’s work, Weingarten says, Capote would head back to his hotel room, type everything up from memory and Lee’s notes, and all this was then filed and cross-referenced.

Weingarten also claims that Capote had ‘taught himself to be his own tape recorder’ and that the fact checker at The New Yorker magazine, which had commissioned the story, ‘found Capote to be the most accurate writer that he had ever worked with.’ This, despite the fact, says Weingarten, that ‘Capote was venturing into unknown territory for The New Yorker, writing about events that he didn’t witness, dialogues that he had received second-hand, interior monologues that could only be stitched together from his interviews and a fair amount of creative licence on his part.’

(The magazine published it in four consecutive issues beginning 25th September 1953 and says James Wolcott in Vanity Fair: ‘It was the closest thing the publishing world had seen to Beatlemania.’)

The New Yorker also published a review by Thomas Mallon [Sept 13th 2004] of ‘Too Brief A Treat: The Letters of Truman Capote’ by Gerald Clarke. Mallon writes: ‘And yet, with this collection of letters, as with each biography that has come along, the fictional quotient of Capote’s ‘nonfiction novel’ has to be revised upward…the effect of these small revelations is always dismaying, and diminishing. The more artistry we espy, the less artistic seems the book, which Capote always touted as a miracle of scrupulosity.’

According to ‘Truman Capote's In Cold Blood: The Nevada Connection’ by Guy Louis Rocha: '‘Capote was a novelist using a reporter's approach, and In Cold Blood suffered from the difference. While Capote claimed in a well publicized interview with George Plimpton in the New York Times Review of Books (January 16, 1966) the book was "immaculately factual", the novelist side of him, many times, permitted great liberties with the facts. And some would say he abused both conventions. For example, we know Capote invented the book's final dramatic scene…

"By insisting that 'every word' of his book is true," Phillip K. Tompkins wrote in the June 1966 issue of Esquire, "he has made himself vulnerable to those readers who are prepared to examine seriously such a sweeping claim." Interviewed by George Plimpton, John Richardson, an acclaimed biographer of Pablo Picasso, claimed that "Truman had absolutely no respect for the truth." Richardson continued, "He felt that as a fiction writer he had license to say whatever came into his head as long as it had a surprising point or shape to it, or an unexpected twist to its tail."

Mallon’s New Yorker review of Capote’s letters goes on to say that Capote claimed to be ‘in closest daily contact with some seven or eight Kansans’ in order to nail down the story. That material, says Mallon, is not in the letters ‘but the serious devotee of ‘In Cold Blood’ would like to see them anyway, if only to measure the gradient of the slippery slope that Capote rolled down towards ‘Handcarved Coffins (1980), a superfictionalised ‘nonfiction’ account of another American crime he’d heard about from Alvin Dewey.’

He’s referring here to the centrepiece of Capote’s collection of journalism and short stories called Music For Chameleons’– a lengthy story entitled ‘Handcrafted Coffins’, written in a similar style to ‘In Cold Blood’, about a strange and unsolved series of murders in another small but unidentified Midwestern town.

It was serialised over several weeks in the Sunday Times, but was later exposed by the very same newspaper two years later, as a hoax. In ‘Hoax: Secrets that Truman Capote took to the grave’ by Peter Gillman, published on June 21, 1992, Capote’s account was revealed to be a weaving together of pieces from various cases he had been told about by Alvin Dewey, the very Kansas detective who is the main investigator portrayed in the ‘Capote’ movie. (Dewey was miffed by the book’s publication as he himself had hoped to write a book of his own memoirs, including the real stories that Capote had confected into his own ‘real crime’ story).

According to Wikipedia: ‘In Cold Blood brought Capote much praise from the literary community, but there were some who questioned certain events as reported in the book. Writing in Esquire (1966), Phillip K. Tompkins noted factual discrepancies after he travelled to Kansas and talked to some of the same people interviewed by Capote. In a telephone interview with Tompkins, Mrs. Meier denied that she heard Perry cry and that she held his hand as described by Capote. In Cold Blood indicates that Meier and Perry became close, yet she told Tompkins she spent little time with Perry and did not talk much with him. Tompkins concluded: 'Capote has, in short, achieved a work of art. He has told exceedingly well a tale of high terror in his own way. But, despite the brilliance of his self-publicizing efforts, he has made both a tactical and a moral error that will hurt him in the short run. By insisting that “every word” of his book is true he has made himself vulnerable to those readers who are prepared to examine seriously such a sweeping claim'.

The Book That Changed A Town
In autumn 2004, a class of seven reporting students, a photography student and four documentary film students at the University of Nebraska-Lincoln spent the season studying Capote's work and its impact on literature and journalism, the community where the story unfolded and some of its principal characters. The students obtained exclusive interviews from people who had refused to talk publicly about the crime or the book. The four-part series based on their investigations was published in the Lawrence Journal-World, a Kansas newspaper, to mark the 40th anniversary of the original publication of the book. These and the documentary film are available for download. http://www.ljworld.com/specials/incoldblood/

In an introductory essay: ‘Holcomb still deals with the pain and attention by Truman Capote's novel’ journalist Van Jensen notes: ‘Without In Cold Blood the murders probably would be forgotten to all but those who lived through the suspicion and fear. And that, in part, fuels the lingering pain so many in Holcomb and Garden City feel. But, West says, Capote harmed the people here in another way. West and many others share stories of Capote misquoting people, describing things incorrectly and making up scenes.’

FINAL NOTES
Adam Mars-Jones wrote an interesting piece in The Observer about Capote's long-lost first novel Summer Crossing, first published in November 2005. He notes: 'Capote claims to have turned himself into a human tape recorder for the purpose of In Cold Blood, since witnesses would be put off by recording equipment or a note book. This always seemed a preposterous claim, making the authority of the book rest entirely on his say-so (and the mystery remains of why anyone said anything whatever to this worldly pixie), but his ear was always good.'

‘Infamous’ (previously named ‘Have You Heard?’), written and directed by Douglas McGrath, covers the same territory as ‘Capote’. Starring English actor Toby Jones as Capote, Sandra Bullock as Harper Lee, the movie also features Sigourney Weaver, Peter Bogdanovich and Gwyneth Paltrow making a cameo appearance as Peggy Lee. The film is adapted from George Plimpton’s oral biography Truman Capote: In Which Various Friends, Enemies, Acquaintances and Detractors Recall His Turbulent Career. It is due to be released by Warner Independent in September 2006.

In Cold Blood was filmed twice. Richard Brooks directed the 1967 movie which starred Scott Wilson and Robert Blake as the two murderers Dick Hickock and Perry Smith. It was filmed at the actual Clutter house and other locations around Holcomb, Kansas. The "semidocumentary" received four Academy Award nominations in 1968, including one for original music score by jazz/pop-legend Quincy Jones. (Ironically, actor Robert Blake was recently put on trial for murder - and acquitted.)

*Capote grew up in a small town in Alabama, next door to Harper Lee whose famous book ‘To Kill A Mockingbird’ has a character based on him.

*Capote was hired as a copy boy at The New Yorker when still in his teens.

*Capote died in the Los Angeles home of Joanne Carson, one of Johnny's ex-wives, on August 25th 1984.
The official cause of death was liver diseas but he had likely overdosed on drugs including Valium, codeine and barbiturates. (Tim Engle, Kansas City Star)

*In an interview with the novelist Edmund White (‘Sweating Mirrors’/After Dark, Sept 1980.) he says that he thinks the most perfect story in his collection ‘Music for Chameleons’ was ‘Then It All Came Down’, which records the visit he made to Robert Beausoleil in prison, ‘the mystery man in the Charles Manson cult.’ [The hired photographer, whose entrance is recorded in White’s reportage, was Robert Mapplethorpe]

*In ‘Tru Grit’ [Vanity Fair /October 2005] James Wolcott says of Capote that he 'looked and sounded like a stunted child – or a hermaphrodite.’ Capote said of himself: ‘I’m about as short as a shot-gun and just as noisy.’

* Capote was, incidentally, forever peeved that this book was overlooked for a Pulitzer Prize which was awarded, a couple of years later, to Norman Mailer’s ‘The Armies of the Night,’ a book which also won the National Book Award. Capote was furious: ‘Norman Mailer, who told me that what I was doing with ‘In Cold Blood’ was stupid and who then sits down and does a complete ripoff.’
at 9:55 pm

You realy know what your talking about. This is a Great Blog. Keep Me Updated.