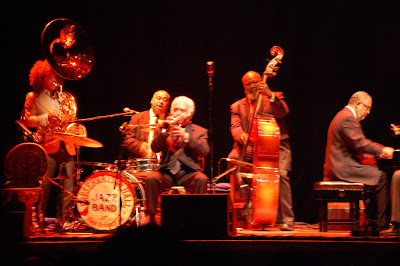 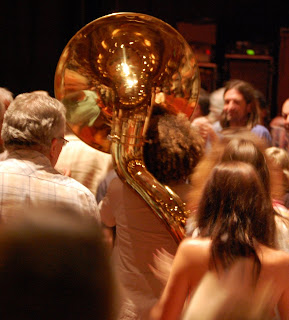 Here is the New Orleans Presservation Band in action at Brighton Dome on 15th June 2007.

Preservation Hall is on 726 St Peter's Street in the French Quarter of New Orleans. It was originally built in 1750 as a private residence and has since housed many businesses including a bar during the Civil War and, more recently, as an art gallery, when the owner Larry Bornestein began to hold informal jazz sessions.

Allan Jaffe was a tuba player and main organiser of these events and in 1961 took over the running of the Hall with his wife Sandra. They envisaged it as a sanctuary for original New Orledans jazz - and so it has remained to this day.

The Preservation Hall Jazz Band was also formed at this time and have been playing in various forms ever since. They currently play about 200 dates a year. For periods, there were several bands touring under that name at the same time. Most of the original band members played with pioneer New Orleans musicians Buddy Bolden, Bunk Johnson, Jelly Roll Morton and Louis Armstrong.

Ben Jaffe is the son of the founders and John Brunious's father composed many of the songs that the band still plays today.

Hurricane Katrina did not damage Preservation Hall physically. Its stone walls and thick wooden shutters were designed to survive such winds. But their business has suffered due to the downturn in tourism post-Katrina and the band personally have fared less well.
Brunious and Rickie Monie lost their homes. Brunious escaped the city but ending up on the floor of the New Orleans convention centre for four days - 'hungry, thirsty and in constant fear of being attacked by marauding youths', according to an Associated Press report.

You can take a virtual tour of Preservation Hall and find out more about the Band here
at 10:00 pm