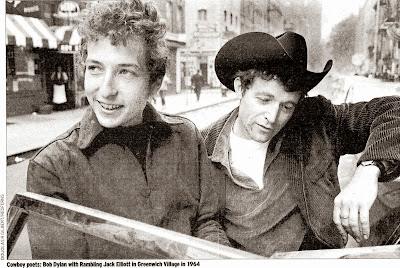 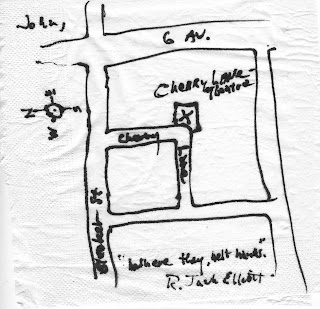 'Later it was a long happy dream of the back yard in Phebe Avenue and Jack Elliott the Singin Cowboy has made a record which is selling a million copies and we're all together in the happy yard, a new house there, at one point there are three thin mattresses on the floor of a cold hut and happily I pick mine out (narrower but thicker) leaving no other choice to the other two guys, Jack & Someone — All forgotten by now, afternoon, saved so I could write "more completely" and this is the sad result.

My mind, the Mind, is too Vast to keep up with.'

[Above: Jack sketched this on a napkin during our interview. It is to precisely indicate where he went with Jack Kerouac and a girlfriend to see a show at the Cherry Lane Theatre, off Bleeker Street in New York. one time. 'Where they helt hands' he writes.
Notice the compass]


Hear this interview with Ramblin' Jack on the Audio Generalist

Here is the original Telegraph article using quotes from the interview

Woody, Bob and Me
Who taught Bob Dylan to sing like Woody Guthrie? Ramblin' Jack Elliott.
John May met him
The Telegraph 19 February 2005
Ramblin' Jack Elliott cuts an unmistakeable figure. In the hotel lobby, he's sporting cowboy boots and hat, check jacket and shirt, bandana and little wire-frame glasses. At 73, he may be feeling less spry than in younger years ("Winter has me feeling like a dead body. Bring on the undertaker," he says) but his eyes twinkle and the songs and stories flow as of old. On Monday, Elliott received a lifetime achievement award at Radio 2's Folk Awards and tomorrow he begins a short tour. The world is finally catching up with this most legendary and elusive of cowboy poets.

Last year's best-selling Bob Dylan autobiography, the artful and elliptical Chronicles, recounted how, while a teenager in , Dylan first discovered Woody Guthrie ("It was like the land parted"). Shortly afterwards, he met Ramblin' Jack, who had got there first. He already had Guthrie's style down to a tee, was leaner and meaner, and was beginning to take his music beyond pure mimicry. "I was cast into a sudden hell," wrote Dylan.


The tale of Guthrie the father and his spiritual sons is worthy of a Steinbeck novel. It's the story of two Jewish boys, Elliott Adnopoz and Bob Zimmerman, both from stable, middle-class backgrounds, who changed their names to Jack Elliott and Bob Dylan and left home in pursuit of the roots and spirit of American music – and who met for the first time at Guthrie's bedside.

As a child, Elliott was fascinated by cowboys. In his teens, he ran away from home and joined a rodeo for three months, where he met a rodeo clown named Brahma Rodgers who gave him his first exposure to cowboy and hillbilly music.

Suitably inspired, and having heard his first Woody Guthrie record, Elliott tracked down his hero to , , only to discover that Guthrie was in the hospital, having almost died of acute appendicitis. Bedridden and medicated, Guthrie was not in the best state to receive anyone, says Elliott's biographer Hank Reineke, "much less a strange 19-year-old kid with an unfamiliar face topped off with a cowboy hat and carrying a guitar case".

Elliott ended up moving into the Guthrie family house and began a five-year apprenticeship and friendship: "We'd get up every day about five in the morning. His son Arlo would wake me by throwing toys at me. We'd feed the kids breakfast and Woody would make a fairly tall glass of whisky and soda and I got to drinking some, too. We would play music, tell stories and drink until it was about 12 o'clock, when he would start to get these dizzy spells and he'd lie down and take a nap."

In 1955, Elliott took off to Europe with his new wife June, spending six years there as a "guitar bum" before returning to , in January 1961. He immediately went to see Guthrie at in , where he was to lie incapacitated with Huntington's chorea, the hereditary disease that had killed his mother, until his death in October 1967.

In a spooky echo of his own first meeting with Guthrie, Elliott found that Guthrie already had a visitor: "a kid wearing a funny hat. I thought he was strange, but really interesting – good-looking in an odd sort of way, with a peach-fuzz beard." It was the 19-year-old Bob Dylan. He had arrived, Jack said later, "right on schedule".

Didn't he find that eerie?

"It's fantastic. It's like a movie. That's the way they want it in the movies. Supposedly doesn't happen that way in real life."

Does he remember that moment?

"Bob was there visiting Woody with this great aura of a young man who was full of respect and admiration for this very sad, tragic, pathetic man. Woody was really beginning to show the effects of his disease, to the point where he could barely play the guitar any more. He could still walk and talk, but his speech was very garbled. He was in this horrible place that was like a mental hospital.

"After an hour, we took a bus over to , and on the way over Bob said [cue Elliott's killer Dylan voice]: `Been listening to some of yer records. I got all six of yer records, Jack. I like yer singing and I like yer style.' He was very shy and muttered and mumbled, which he still does. He perfected the art of mumbling.

"I thought his guitar style was really interesting. It was awfully rough but very good and I could tell by his angle of attack, his attitude and the way he sang that he was going to be great. Other people could see he was imitating me but I couldn't see it at first. I was imitating Woody, and I was helping Bob to learn how to do it."

Jack and Bob hung out for a year or two, even living on the same floor of the same hotel along with rodeo cowboy Peter La Farge for a time. "We were best of friends and I could go on and on about the good times we had at the Gaslight and Gerde's [ clubs], where the crowds were always rude, noisy and inattentive."

Inevitably, their paths and careers diverged. Jack lost contact when Dylan moved to , but in 1975, Dylan invited Jack on the anarchic first leg of The Rolling Thunder Review tour, only to effectively drop him from the second tour of bigger stadiums the following year.

But Jack's affection for Dylan remains undimmed and the spirit of Guthrie lives on in them both. "I thought he paid me a very nice compliment in the book and a lot of other people too," says Elliott. "He sent me a birthday telegram when I was 70, which I got at a party at my manager Roy Roger's house. It said: 'Happy Birthday Jack. This Land Is Your Land. Bob.' It's plagiarism – but who cares."

Read the story behind the interview here