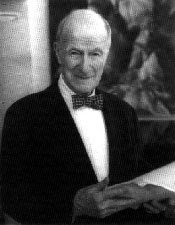 Scientific American has always been one of my favourite magazines so was delighted to discover in the Generalist Archives - currently undergoing a major overhaul, of which more anon - an interesting correspondence with Gerard Piel, the former publisher and chairman of the magazine, who

sadly died on September 5th 2004, at the age of 89. A true ambassador of science, he traveled widely and was much loved and honoured for his pioneering role in the development of popular science journalism and for his global citizenship.

Read the magazine's own obituary on this important and gracious man.

I say gracious because in 1975, when I was 25 years old and he was 60, I wrote to him regarding our book 'An Index of Possibilities' to ask him whether he could possibly write something for us on the history of the magazine. To my astonishment (bear in mind he did not know me from Adam) he sent me a long three page letter on 29th May 1975, published here for the first time: 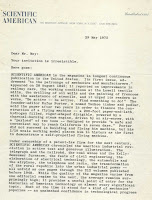 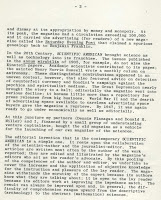 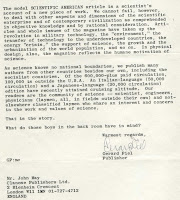 The reference to the 'boys in the back room' was a suggestion that we might have ideas to contribute to the mag. A number were submitted (at present cannot find copies of the letters I wrote to him - the other half of the conversation). Again Gerard Piel was kind enough to respond as follows: 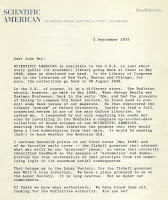 Obituary: American Association for the Advancement of Science

There is a fairly substantial entry for Scientific American in Wikipedia but just a poor eight-line stub on Gerard Piel. Hopefully someone out there will take this on.

Wikipedia says: The partners - publisher Gerard Piel, editor Dennis Flanagan, and general manager Donald H. Miller, Jr. - created ...the Scientific American magazine of the second half of the twentieth century. Miller retired in 1979, Flanagan and Piel in 1984, when Gerard Piel's son Jonathan became president and editor. In 1986 it was sold to the Holtzbrinck group of Germany, who have owned it since. Donald Miller died in December, 1998. Gerard Piel in September 2004 and Dennis Flanagan in January 2005.
at 1:21 pm