Above: X-ray portrait of a healthy young woman wearing a necklace. The 'density slicing' is not electronic in this case. The colours were produced by a new kind of photographic paper. A normal x-ray was printed on a special emulsion, using several exposures of different lengths, and gradually building up the various colours according to the shades of grey in the original negative. [Credit: Agfa Gevaert]

Gerard Piel was back in touch on the 26 January 1978 in connection with our newly-published book 'Worlds Within Worlds'.

He wrote: 'You put together a fantastic collection of pictures. It will make a great swipe file for generations of editors yet to come. Will the book have a publisher over here? We cannot tantalise our readers with reviews of books they cannot lay hands on. Especially this one.'

In fact the book was published by Secker & Warburg in London in 1977 and by Holt Rinehart Winston in the States (with a different cover) the following year.

The book was reviewed in the December 1978 Scientific American by the eminent Philip Morrison in his annual Christmas round up of science books for younger readers, alongside a book of Victorian science illustrations called 'Album of Science: The Nineteenth Century.'

I think I can rightly claim 'Worlds Within Worlds' was my original idea, inspired as I remember it, by an advert that appeared in an issue of Sci Am, which showed an early brain scan image. I thought a collection of scientific imagery would make a good book - and so it turned out. The book was produced by four of us - myself, John Chesterman, John Trux and Michael Marten and was designed by Richard Adams.

I believe this book was the first popular survey of the whole range of scientific imagery - heat, x-ray, satellite, hi-speed. micro - to be published. Certainly most of the scientists we contacted were surprised that anyone outside of their field would be interested in their work. What we saw was the beauty and artistry behind many of these images. In the early 1970s the popularisation of science was still in its infancy and such images were not widely seen at the time.

Our book was won an honourable mention at the Eighth Annual Children's Science Book Award presented by the New York Academy of Sciences at a ceremony on April 17th 1979 which we were unable to attend. Philip Morrison was one of the judges.

The book was serialised over six pages in the Sunday Times magazine. New Scientist described it as 'a large, colourful, eyecatching picture book and could be appreciated as a work of art alone on the strength of its pictures. It is supplemented however with a delightful and carefully thought out text which lifts it well out of the coffee-table league. The Observer called it 'one of the most enlightening pieces of pop science publishing in a long time.' Nature reviewed it under the title 'A Talent to Amuse' and concluded: 'An intelligent choice of pictures and words makes this a volume that will fascinate and inspire.'

British Book News (March 1978) said: 'This is a book in which the beauty of the normally unseen world is fascinatingly revealed. Until comparatively recently that world was unseen because our eyes are sensitive only to a very narrow range of wavelengths. However, recent developments in the use of radiations other than visible light for the recording of the world about (and inside) us have vastly extended our knowledge of this world. Within the last ten years, techniques have been perfected which have made visible things about which we could previously only theorise...This is truly a book which demonstrates that science need not be dull but is an excitging 'journey into the unknown' as the book's sub-title so rightly claims.' 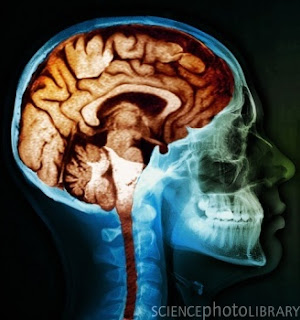 One of the legacies of the book was the Science Photo Library, created in the mid-1970s by Michael Marten, which has grown to become one of the premier photo agencies of its kind in the world

Right: Coloured magnetic resonance imaging (MRI) scan of the brain from the side, combined with a coloured neck and skull X-ray.
Credit: SOVEREIGN, ISM / SCIENCE PHOTO LIBRARY
at 12:11 pm