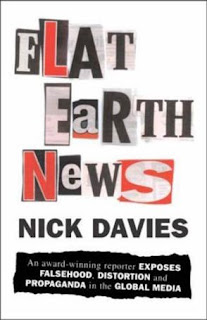 Nick Davies, Special Correspondent for 'The Guardian' speaks to The Generalist in a new series of contemporary interviews for our companion audio site THE AUDIO GENERALIST. Listen now.


His latest book is 'Flat Earth News' [Chatto & Windus] - a term he defines as an unreliable statement or story 'created by outsiders, usually for their own commercial or political benefit, injected by a wire agency into the arteries of the media through which it then circulates around the whole body of global communication .'

The rise of 'flat earth news' in our media is due, Davies believes principally to less people having to produce more stories in a 24/7 environment, leaving little time to check facts - or even to leave the office !

It also means an unhealthy reliance on wire copy and pr releases. A research report specially commissioned for the book from the University of Cardiff discovered that 80 per cent of news stories in a sample of 'quality' national newspapers in the UK consisted of agency or PR copy. [Available for download here]

On a low level it means more noise in the system; on a high level - the Y2K panic and WMDs in Iraq.

The book also reveals the extent to which British 'broadsheets' employ the services of a network of 'crackers' who supply them with details from private databases - phone records, bank details and the like.

The book, most controversially, analyses three newsroom situations in more depth: the history of the Insight team at the Sunday Times and the reason for its decline; the situation in the newsroom at The Observer leading up to the paper's decision to give its editorial support to Blair's Iraq campaign; the scene inside Paul Dacre's Daily Mail (In a word: ugly.)

The book's sucess can be partly judged by the fact that it is already on its third reprint just eight days after publication.

The book has received a great many praiseworthy reviews, including:

The Vile Behaviour of the Press by Peter Oborne
[The Spectator. 30 Jan 2008]

[Since first posting, Nick Davies has written to us claiming that the Kamal Ahmed piece is libellous and that he has written to the Independent to that effect. The Times are publishing a letter tomorrow correcting what he describes as 'the worst of the falsehoods' in the Dan Sabbagh piece.

CRITICS
'No topic is so surrounded by myth as the golden age of the press.' by Simon Jenkins
(The Guardian 8 Feb 2008)

DIGITAL DEBATE
What interested me most was a quote in Hard truths for the trade in 'Flat Earth News' by Tim Luckhurst (The Independent 10 Feb 2008): 'I suspect Flat Earth News will come to be seen as among the last excellent books about journalism by a member of the pre-digital generation. Many of the sins he identifies are too easily detected by informed internet readerships. That which survives unchallenged in print is increasingly exposed to ruthless scrutiny on the web. Cynicism is not a new phenomenon in British journalism, but it has a new foe.' [First sighting of the phrase 'pre-digital generation'! Those who began on manual typewriters]

charliebeckett.org makes the point that Davies seems uninterested in 'alternatives to Big Media. There is a world of citizen journalism, user generated content and bloggers out there. There is also a whole range of new journalism techniques that can link the hack with the public to create a more interactive, transparent and trustworthy news media. It can support even the most sophisticated kinds of investigative journalism.'

There is a detailed and interesting critique by Adrian Monck which questions the Cardiff research and much of this has to do with new technology, which has revolutionised journalistic practice and enabled writers to be much more productive. [Monck has his own book out called 'Can You Trust the Media.']

Nick Davies gave a speech at the London School of Economics on Nov 17, 2007. It is reproduced on the Media Workers Against the War site. The first comment on the piece reads as follows: