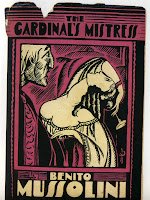 [Left]: 'Peacock Feathers' by Temple Bailey, (Grosset & Dunlap. 1924). The designer was Cole Philips. [Right]: The cover of 'The Cardinal's Mistress', Mussolini's first and only novel, (Albert & Charles Boni. 1928). The artist is unknown

Both taken from the marvelous 'Jackets Required: An Illustrated History of American Book Jacket Design 1920-1950' by Steven Heller and Seymour Chwast [ Chronicle Books. 1995]

In a recent essay in the New York Times - 'Great Literature? Depends Who Wrote It', Charles McGrath looks at 'the assumption that genre fiction - mysteries, thrillers, romances, horror stories - is a form of literary slumming.'

'These kind of books,' writes McGrath, 'are easier to read, we tend to think, and so they must be easier to write, and to the degree that they're entertaining, they can't possibly be serious.'

He says the 'distinction between highbrow and lowbrow - between genre writing and literary writing - is actually fairly recent. Dickens wrote mysteries and horror stories, only no one thought to call them that.'

[Digression: In my book 'Curious Facts 2', it says 'the phenomenon whereby social structure affects taste was dubbed 'Highbrow' and 'Lowbrow' in a 1914 essay by Van Wyck Brooks.' Have lost my source for this but this statement now seems unlikely. He no doubt discussed the issue in his writings but the 3rd Edition of the Shorter Oxford English Dictionary puts 'highbrow' (meaning 'intellectually superior') as US 1908 and 'lowbrow' as 1913. The answer undoubtedly lies in 'Highbrow/Lowbrow:The Emergence of Cultural Hierarchy in ] Levine {Harvard University Press], which I have yet to read. The blurb says that Levine traces 'the emergence of familiar categories as highbrow and lowbrow at the turn of the century.'
Further digression: Just discovered 'From Lowbrow to Nobrow'

McGrath goes on to talk about 'that interesting category of novels that are said to "transcend" their genre'. This is false praise' says McGrath. 'To trancend its genre, a book has to more nearly resemble a mainstream novel.'

The above thoughts provide a prelude to THE GENERALIST's round-up of the best of genre fiction I have read in the last 12 months. A few of these books are brand new, others have been published in recent years. They are all intelligent, intriguing and interesting books which will provide you with hours of valuable 'diversionary reading' - taking your mind of worldly and personal worries and concerns. They are thus a valuable and absorbing strategic resource.

'In 1909, Sigmund Freud, accompanied by his then disciple Carl Jung, made his one and only visit to the United States, to deliver a series of lectures on psychoanalysis at Clark University, in Worcester, Massachusetts. The honorary doctoral degree that Clark awarded him was the first public recognition Freud had ever received for his work. Despite the great success of this visit, Freud always spoke, in later years, as if some trauma had befallen him in the United States. He called Americans 'savages' and blamed his sojourn there for physical ailmments that afflicted him well before 1909. Freud's biographers have long puzzled over this mystery, speculating whether some unknown events in America could have led to his otherwise inexplicable reaction.'

Thus begins Jed Rubenfeld's masterful work, that invents a fictional explanation of this real-life conundrum, in which Freud is drawn into the investigation of a savage murder of a stunning debutante. It's a great read in itself but what makes it doubly intriguing are the author's end notes, which scrupulously itemise how much fact lies behind his fiction and exactly where the fiction differes from the known historical record. It will suprise you.

[The book had the effect of sending me back to my collection of Jung books and led me to purchase what is I believe is the best modern biography - 'Jung: A Biography' by Deirdrie Blair [Little, Brown. 2004] - and read the first 200pp of it. (The book is a vast 647pp with a further 200pp plus of detailed notes and references and an excellent index). Its a totally fascinating story which I hope to return to in due course.]

'The Chatelet Apprentice' is the first of a series of novels featuring the character Nicholas Le Floch in Paris in the 1760s, written by Jean Francois Parot, a diplomat and historian. These books have been celebrated in France since first p;ublication in 2000 but is was only last year that this first adventure was made available for readers in an English translation by Gallic Books in London. (The second, 'The Man with the Lead Stomach', is due for publication in April 2008). Parot uses all his professional skill to paint an accurate portrait of the sights and sounds of the period, full of telling incidental detail. The central crime is suitably dark and convoluted and involves a cast of a characters full of subtlety and substance. Le Floch is an engaging central figure, full of uncertainties, who in this book is undergoing a trial by fire as he struggles to discover missing documents of vital importance to the King as dead bodies proliferate around him.

Fred Vargas is the pseudonym of a French female academic archaeologist and this delightful and quirky book, first published in English in 2003, is one of a number of her works now available in translation. The mystery starts with an Breton town crier who, three times a day in a small Parisian square, reads out the local news and adverts people have posted in his box, to his small but devoted audience. All is well until a series of disturbing messages start appearing, warning of death and pestilence, followed by the appearance of strange markings of apartment doors. The case comes to the attention of Detective Commissaire Adamsberg whose eccentric techniques enable him to eventually unmask the true secrets behind a dark and diabolical plot. Pitched just on the right side of the unbelievable, its creepy themes pick up contemporary resonances with the paranoid times we live in.

The extraordinary phenomenon of 'The Da Vinci Code' has spawned an ocean of imitators, eager to try and emulate the success of the original. The only one I've been drawn to read is Michel Benoit's 'The Thirteenth Apostle' - a satisfying, well-written mystery built out of time-honoured elements: a young Benedictine who, following the mysterious death of a colleague, begins searching for lost biblical texts that place Jesus in a fresh context, one that would threaten the teachings of the established church. Naturally, there is a dark cabal inside the Vatican who are determined that he will not suceed.

[Of course the Godfather of this genre must be Umberto Eco with his landmark books 'The Name of the Rose' and 'Foucault's Pendulum' - both huge tomes stuffed with long sections of arcane knowledge welded to a gripping plot that I remember finding genuinely thrilling and unique at the time.]

Translated from the German, this No 1 Swiss bestseller is one of a number of Eurocrime novels published by Arcadia Books. Set in the claustrophobic community of an out-of-season hotel in a remote Alpine village in the Swiss Engardine, its main character is Sonia Frey, escaping a violent husband and a bad acid trip, who gets a job there as a physiotherapist, hoping that fresh landscapes, Alpine air and a calm and ordered existence will heal her soul.
Bad move as it turns out. Sutter expertly creates an atmosphere of menace and intrigue, in which real-life violence appears to be following the plot of ancient superstitions.

Considered Italy's leading crime writer, Massimo Carlotto's first book 'The Fugitive' is a novelised real-life story about the years he spent on the run from the criminal authorities. It's an extraordinary tale.

Born in 1956 in North-Eastern Italy, Carolotta first got interested in far-left politics at the age of thirteen. He became an activist with Lotta Continua and began getting involved in investigative and counter-information work. In 1976, after discovering the body of an acquaintance who had been brutally murdered, he was falsely accused of the murder, arrested and put on trial. Acquitted and then convicted (there is no double-jeopardy law in Italy), Massimo, on the advice of his lawyers, fled abroad to avoid imprisonment.

rom 1982 to 1985, he lived under a series of borrowed identities in Paris and then moved to South America. During these years of exile he was supported and sheltered by the international community of political refugees and worked in a number of capacities (pizzaiolo, translator, academic researcher) whenever he was able. In Mexico, he was betrayed by a lawyer, underwent torture following a case of mistaken identity, and then returned to Italy and to prison. In 1986, Massimo Carlotto became the focus of an international defence campaign that won wide backing: the South American novelist Jorge Amado and the eminent Italian philosopher Norberto Bobbio were among his supporters. In 1993 he was finally released from prison with a pardon from the President of Italy.He had been tried a total of eleven times and had amassed 96 kilos of court proceedings.

After his release, Massimo quickly turned to writing, 'The Fugitiveis first and most autobiographical novel, Il fuggiasco (Fugitive) relates the almost eighteen years between his arrest and his presidential pardon. A film version of Il fuggiasco, directed by Andrea Manni and starring Daniele Liotti, was released in 2003. It has won many awards.

Since then, Massimo has written eight other novels, several plays, countless newspaper articles and essays. Film versions are currently being made of two of his most recent novels ('The Goodbye Kiss' and 'Death's Dark Abyss'); in January 2005, he signed a contract with his Italian publishers for five more novels. He also continues to act as a consultant to criminal lawyers, assisting them in cases involving organised crime, political intrigue and state intelligence.

The books mentioned are all published by Europa Editions, a fantastic imprint which specialises in publishing contemporary European writing.