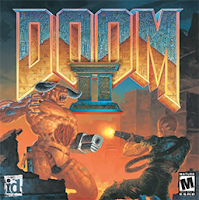 'Using the shareware tools, the Marines rewrote the code for the commercial game DOOM II. Instead of employing fantasy weapons to face down monster-like characters in a labyrinthine castle, real-world images were scanned into the game’s graphics engine along with images of weapons such as the M16(a1) rifle, M-249 squad automatic weapon, and M-67 fragmentation grenades. In place of the monster characters, 3D scans were done of GI-Joe action characters. The game was also modified from its original version to include fighting holes, bunkers, tactical wire, “the fog of war,” and friendly fire.'
- Tim Lenoir and Henry Lowood 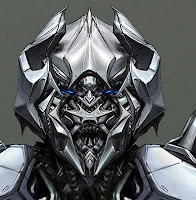 'Speaking about the big-budget, live-action blockbuster Transformers (2007), Ian Bryce, one of its producers, characterized the relationship this way, "Without the superb military support we've gotten… it would be an entirely different-looking film… Once you get Pentagon approval, you've created a win-win situation. We want to cooperate with the Pentagon to show them off in the most positive light, and the Pentagon likewise wants to give us the resources to be able to do that."
-Nick Turse 'The Golden Age of the Military-Entertainment Complex' (March 2008) [Anti-War.Com] 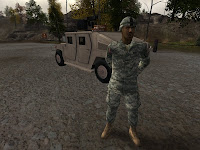 CREATED BY SOLDIERS. DEVELOPED BY GAMERS
'In July of 2002, the Army turned on the servers for the America's Army game and watched as thousands of gamers rushed to download our America's Army: Operations RECON version. Since then, more than 9 million players have registered to join the America's Army experience. These players have participated in over 205 million hours of online play exploring Soldiering as members of elite U.S. Army units. These devoted fans catapulted America's Army into the top five online action games at its launch and have kept America's Army in the top ten on the charts ever since.'
- Letter from Leadership.
[The game is intended as a recruiting device.]
What ya need is what they sellin'
Make you think that buyin' is rebellin'
From the theaters to malls on every shore
Tha thin line between entertainment and war
Rage Against The Machine - 'No Shelter' 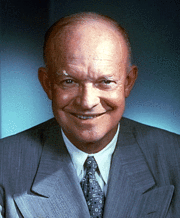 Back in 1961, in his farewell speech, US President Eisenhower warned of the dangers of the military-industrial complex. In a famous quote, he said:

'Until the latest of our world conflicts, the United States had no armaments industry...we have been compelled to create a permanent armaments industry of vast proportions. Added to this, three and a half million men and women are directly engaged in the defense establishment. We annually spend on military security more than the net income of all United States corporations.

'This conjunction of an immense military establishment and a large arms industry is new in the American experience. The total influence -- economic, political, even spiritual -- is felt in every city, every State house, every office of the Federal government. We recognize the imperative need for this development. Yet we must not fail to comprehend its grave implications. Our toil, resources and livelihood are all involved; so is the very structure of our society.

'In the councils of government, we must guard against the acquisition of unwarranted influence, whether sought or unsought, by the military-industrial complex. The potential for the disastrous rise of misplaced power exists and will persist.

'We must never let the weight of this combination endanger our liberties or democratic processes. We should take nothing for granted. Only an alert and knowledgeable citizenry can compel the proper meshing of the huge industrial and military machinery of defense with our peaceful methods and goals, so that security and liberty may prosper together.'

Nick Turse's recently published book The Complex: How the Military Invades Our Everyday Lives' was reviewed in 'The Pentagon is Everywhere' by Noah Shachtman, a post on the excellent Wired blog DANGER ROOM: What's Next in National Security. The book was was less enthusiastically reviewed by the Chris Barsanti on the excellent Pop Matters site. Also see extract from the book on TomDispatch.com

Turse writes: 'Looking at the situation in 1970, almost 10 years after Eisenhower's farewell speech, Sidney Lens, a journalist and expert on U.S. militarism, noted that there were 22,000 prime contractors doing business with the U.S. Department of Defense. Today, the number of prime contractors tops 47,000 with subcontractors reaching well over the 100,000 mark, making for one massive conglomerate touching nearly every sector of society, from top computer manufacturer Dell (the 50th-largest DoD contractor in 2006) to oil giant ExxonMobil (the 30th) to package-shipping titan FedEx (the 26th).... But the difference between now and then isn't only in scale...Pentagon spending is reaching into previously neglected areas of American life: entertainment, popular consumer brands, sports. This penetration translates into a remarkable variety of forms of interaction with the public.' 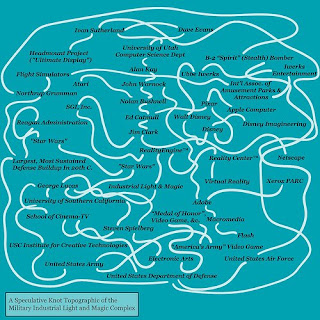 This post was inspired initially by this diagram from the Near Future Laboratory website. The diagram is appended to a downloadable pdf of a keynote talk delivered at the 2006 ACM SIGCHI International Conference on Advances in Computer Entertainment Technology, 14-16 June 2006, Hollywood, California.

'War games are simulations combining game, experiment and performance. The U.S. Department of Defense (DoD) has been the primary proponent of war game design since the 1950s. Yet, commercial game designers produced many of the ideas shaping the design of military simulations, both before and after the advent of computer-based games.

'By the 1980s, the seeds of a deeper collaboration among military, commercial designers, the entertainment industry, and academic researchers in the development of high-end computer simulations for military training had been planted.

They built “distributed interactive simulations” (DIS) such as SIMNET that created virtual theaters of war by linking participants interacting with distributed software or hardware simulators in real time. The simulators themselves presented synthetic environments—virtual worlds—by utilizing advances in computer graphics and virtual reality research. With the rapid development of DIS technology during the 1990s, content and compelling story development became increasingly important.

'The necessity of realistic scenarios and backstory in military simulations led designers to build databases of historical, geographic and physical data, reconsider the role of synthetic agents in their simulations and consult with game design and entertainment talents for the latest word on narrative and performance. Even when this has not been the intention of their designers and sponsors, military simulations have been deeply embedded in commercial forms of entertainment, for example, by providing content and technology deployed in computer and video games.'

They conclude that: 'Military technology, which once trickled down to civilian use, now usually lags behind what is available in games, rides and movie special effects.' 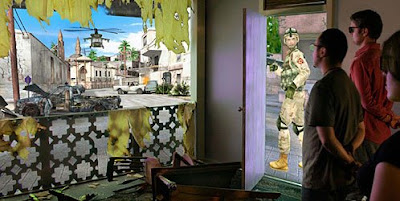 One of the hotbeds of military/entertainment research is the Institute for Creative Technologies in Los Angeles. Their website reads: 'Collaborating with our entertainment industry neighbors, we are the leaders in producing virtual humans, computer training simulations and immersive experiences for decision-making, cultural awareness, leadership and health. Engaging and effective. Powerful and portable. Our innovations help save lives, resources and time.'

'ICT was established in 1999 with a multi-year contract from the US Army to explore a powerful question: What would happen if leading technologists in artificial intelligence, graphics, and immersion joined forces with the creative talents of Hollywood and the game industry? The answer is the creation of engaging, memorable and effective interactive media that are revolutionizing learning in the fields of training, education and beyond. We are leaders in an international effort to develop virtual humans who think and behave like real people. We create tools and immersive environments to experientially transport participants to other places.... Our work has made such an impact, that our founding contract was followed up in 2004 with a new five-year commitment to allow us to continue our innovative work.'

Leonard and Lowood report that in August 1999 the Army pledged '$45 million to the University of Southern California over the next five years to create a research center [ITC] to develop advanced military simulations....The idea for the new center...reflects the fact that although Hollywood and the Pentagon may differ markedly in culture, they now overlap in technology. In opening the new Institute for Creative Technology Secretary of the Army Louis Caldera said, “We could never hope to get the expertise of a Steven Spielberg or some of the other film industry people working just on Army projects.” But the new institute, Caldera said, will be “a win-win for everyone.”

Check out this 2003 story from DocBug:Intelligence, media technologies, intellectual property, and the occasional politics: 'The CIA's Counter-Terrorism Center (CTC) is working to develop training simulations with the help of the Institute for Creative Technologies, a center within the University of Southern California that specializes in combining artificial intelligence, virtual reality and techniques from the videogame and movie industries to create interactive training simulations. The company recently received accolades for their "Full Spectrum Warrior" project, which was designed as a training aid for the US Army but has also lead to a commercial videogame for the X-Box.'