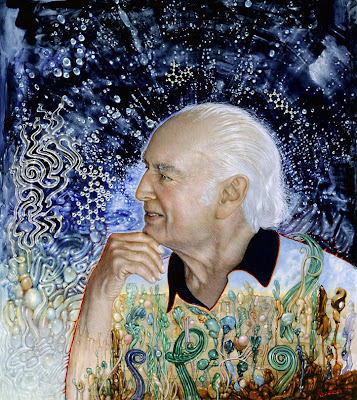 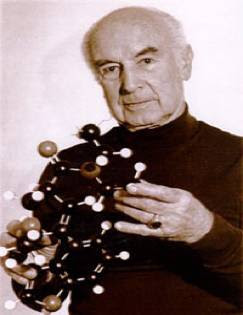 When Albert Hofmann turned 100 - an occasion marked by a huge symposium in Basel - Craig S. Smith of the New York Times interviewed him at his 'modernist home on a grassy Alpine hilltop' about his life and times, including, most famously, his discovery of LSD and his first experiences with it April 1943.

He said of this: "Immediately, I recognised it as the same experience I had had as a child."

'As the years accumulate behind him, Mr. Hofmann's conversation turns ever more insistently around one theme: man's oneness with nature and the dangers of an increasing inattention to that fact.

"It's very, very dangerous to lose contact with living nature," he said, listing to the right in a green armchair that looked out over frost-dusted fields and snow-laced trees. A glass pitcher held a bouquet of roses on the coffee table before him. "In the big cities, there are people who have never seen living nature, all things are products of humans," he said. "The bigger the town, the less they see and understand nature." And, yes, he said, LSD, which he calls his "problem child," could help reconnect people to the universe.

Rounding a century, Mr. Hofmann is physically reduced but mentally clear. He is prone to digressions, ambling with pleasure through memories of his boyhood, but his bright eyes flash with the recollection of a mystical experience he had on a forest path more than 90 years ago in the hills above . The experience left him longing for a similar glimpse of what he calls "a miraculous, powerful, unfathomable reality."

"I was completely astonished by the beauty of nature," he said, laying a slightly gnarled finger alongside his nose, his longish white hair swept back from his temples and the crown of his head. He said any natural scientist who was not a mystic was not a real natural scientist. "Outside is pure energy and colorless substance," he said. "All of the rest happens through the mechanism of our senses. Our eyes see just a small fraction of the light in the world. It is a trick to make a colored world, which does not exist outside of human beings.

'He became particularly fascinated by the mechanisms through which plants turn sunlight into the building blocks for our own bodies. "Everything comes from the sun via the plant kingdom," he said.' 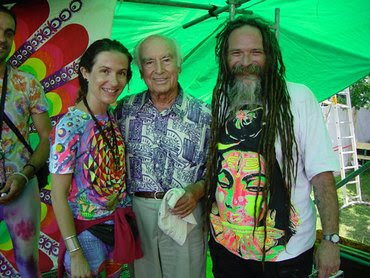 An excellent report on the Basel conference: 'LSD: Problem Child and Wonder Drug', an International Symposium on the Occasion of the 100th Birthday of Albert Hofmann.

'During a press conference on Friday, Hofmann revealed that he was told by Nobel-prize- winning chemist Kary Mullis that LSD had helped him develop the polymerase chain reaction that helps amplify specific DNA sequences.

'In his presentation, artist Alex Grey noted that Nobel-prize-winner Francis Crick, discoverer of the double helical structure of DNA, also told friends he received inspiration for his ideas from LSD, according to news reports.

'The gathering included a discussion of how early computer pioneers used LSD for inspiration. Douglas Englebart, the inventor of the mouse, Myron Stolaroff, a former Ampex engineer and LSD researcher who was attending the symposium, and Apple-cofounder Steve Jobs were among them. In the 2005 book What the Dormouse Said, New York Times reporter John Markoff quotes Jobs describing his LSD experience as "one of the two or three most important things he has done in his life." [see link below]

'Asked if the world needs his invention, Hofmann said he hoped that the Basel LSD symposium would help create an appropriate place for LSD in society.

"I think that in human evolution it has never been as necessary to have this substance LSD," said Hofmann. "It is just a tool to turn us into what we are supposed to be." 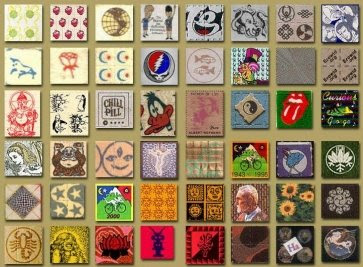 Collage of LSD blotter art. Text and image from this great Neurophilosophy blog

Erika Dyck, a professor of medical history at the University of Alberta, investigated the work of a pioneering group of Canadian psychiatrists who in the 1950s and 60s used LSD to treat alcoholic patients. She has uncovered research papers describing studies in which single doses of the hallucinogenic drug were an effective effective treatment for alcoholism, and has interviewed patients who participated in the clinical trials documented in the papers.

Some of the papers found by Dyck were authored by Humphry Osmond, the controversial British psychiatrist who first used the term ‘psychedelic’ at a meeting of the New York Academy of Sciences in the early 1950s, and who gave Aldous Huxley the dose of mescaline which gave the writer the inspiration for his book The Doors of Perception.

In one of the studies, conducted in 1962, 65% of alcoholic patients given a single dose of LSD stopped drinking for at least one-and-a-half years, compared to 25% of control patients who received group therapy and 12% of another control group given traditional forms of therapy which were popular at the time.

“The LSD somehow gave these people experiences that psychologically took them outside of themselves and allowed them to see their own unhealthy behavior more objectively, and then determine to change it,” says Dyck. “[It] appeared to allow the patients to go through a spiritual journey that ultimately empowered them to heal themselves, and that’s really quite an amazing therapy regimen.”

'Most of the studies uncovered by Dyck were later discredited because they did not involve randomized, controlled clinical trials. Nevertheless, Dyck says that the use of LSD was not, as many people believe, on the fringes of biomedical research but instead was a legitimate branch of psychiatry which was promising and encouraging. She says that the use of LSD by members of the anti-war counterculture in the 1960s, and its subsequent criminalization by the government made research into its effects unpopular. This glut in research into psychotomimetic drugs lasted for decades, and it is only recently that biomedical research into LSD and related substances has resumed.'

See: THE VAULT OF ALBERT HOFFMAN. Probably the best single resource site for Albert Hofmann on the web, part of the atonishing Erowid site

The entire text of Hoffman's memoir 'LSD: My Problem Child' is on line at the Psychedelic Library. See Chapter 8 about his meeting with Aldous Huxley.

Trip of a lifetime: How LSD rocked the world:It's the psychedelic drug that inspired Hendrix and The Beatles - and shaped the music, art and literature of a generation. As the world bids farewell to the bicycling Swiss chemist who created LSD, John Walsh explores his mind-altering legacy. The Independent 1 May 2008

LSD is the latest trend in Lebanon's drug scene by Hala Alyan. [Ya Libnan 9 May 2008]
'LSD has not so much flooded the mainstream drug market in Beirut as quietly become accessible to choice participants, mostly university students between the ages of 17 and 22.

'Rolling a cigarette as she spoke, the girl said that when she takes acid with her group, it feels like they are "in the Sixties, like we're starting our own revolution." She's happy to keep Beirut's new wealth of LSD under the radar. "All the people who want to take tabs and go clubbing just don't understand it."

LSD and THE BROTHERHOOD

What the Dormouse Said: Counter-Culture and Computing
at 10:48 am