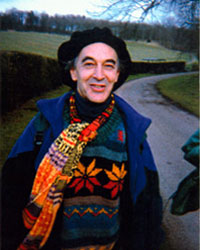 Photo Anya Saunders.
Text and photos found on
The Vaults of Erowid
Obituary: The Independent

Nicholas Saunders was a pioneer of the wholefood movement and the man behind the development of Neal's Yard in (people who came up to him there often addressed him as Neal). In the Seventies he was the author of Alternative London, a guide to alternative living, and in the Nineties of E for Ecstasy, a study of the new drug culture. Saunders was always conscious of a trend.

He was born in 1938 at Water Eaten Manor near , a youngest son, born late in life to his academic parents. His father, Sir Alexander Carr Saunders was from 1937 to 1956 Director of the London School of Economics.

Nicholas was educated at , in , and completed two years at , , before leaving without a degree. He disliked authority and preferred to study the subjects he was interested in. From early childhood he had a curious mind; he was anxious to find out how things worked and how they could be changed or improved.

He was fascinated with the breaking up of the conventional life-style in the Sixties. He constructed a flat in Edith Grove, west London, so that ducks in the pond outside could swim under a plate-glass window and into his living room, and he slept in a papier-mache 'cave'. The flat became a centre for hippies and anyone with new alternative ideas. These he began to record and the first edition of Altemative London was brought out in 1970. It be came an immediate best-seller. Further editions followed until a friend meditating in front of a candle inadvertently burnt the flat down. Saunders was ready to take up a new interest.

He had private means and in 1976 had fallen in love with and bought a warehouse in Neal's Yard, then let as a store for theatrical scenery. The end of its lease coincided with the closing of the old fruit market and the start of the new . Saunders knew many young people who had skills and wanted to work for themselves, and didn't have financial backing to do this. He enjoyed either starting himself or enabling others to run new ventures; and these were often soon copied elsewhere. Though always a firm buyer of ready-cooked meals from Marks and Spencer for himself, he welcomed the new demand for wholefood and by packing it in large quantities made it available at a more reasonable price.

Gradually he bought up other buildings in the yard, where he helped to finance a cooperative bakery, dairy, flour mill, apothecary and cafe. He planted trees in tubs, covered the buildings with window boxes so that a profusion of flowers trailed down the walls and imported white doves who fluttered overhead. In fine weather the yard was crowded with office workers, tourists and regulars eating their lunch.

The wholefood shop was sold in the mid-Eighties, whereupon, hearing about the many practitioners of alternative medicines who had nowhere to practise, Saunders decided to open therapy rooms they could hire. His intention was for each practitioner's c.v. to be available to potential patients. Two buildings at one end of the yard were rebuilt and there, having been excited early on by the potential of computers, Saunders started the first Desk Top Publishing Studio, where people could hire computers by the hour and be given professional help. A "self-fulfilment agency" and a small restaurant were housed in the same building.

On the top floors he designed an imaginative rooftop garden and a flat where he slept in a suspended egg and arranged a padded ledge for guests. Here his son, Kristoffer, of whom he was immensely proud, slept on his regular visits from .

Nicholas Saunders spent the last years of his life investigating the drug culture and particularly Ecstasy, which he realised had become a way of life among many young people. The result was his book E for Ecstasy, published in 1993, followed by Ecstasy and the Dance Culture (1995) and Ecstasy Reconsidered (1996). When he died he was working on another book, about drugs and spirituality.

Saunders believed that it was now impossible to ban drugs altogether; it was better that they should be used sensibly. He particularly disliked the sensational and inaccurate newspaper coverage of the subject, and regretted that politicians of all parties were unable to discuss the problem seriously.

With his partner, Anya Dashwood, with whom he had found complete happiness during the last few years, Saunders travelled all over the world gathering information for his new book. It was on the only trip that she did not accompany him that he met his death in a car accident in .