MASTERS OF THE AVANT-GARDE 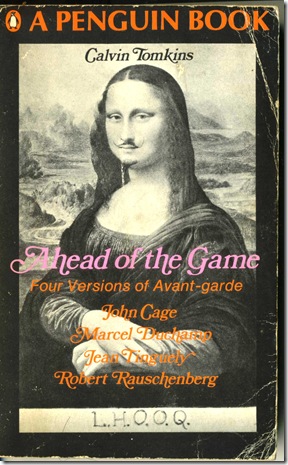 This ‘found’ object is a battered copy of a remarkable book (a snip at £1), first published in the US in1962, this edition being the 1968 Penguin paperback version.

Written by Calvin Tomkins, best known as a writer for The New Yorker, the book consists simply of four profiles of major avant-garde artists – four figures whose work and influence endures, as it turns out. The prescient title says it all: Ahead of the Game.

Marcel Duchamp, the enigmatic Master, the original Cool Dude, a man who never joined a movement, remained his own singular presence. invented the ‘ready-made’ (the urinal being he most famous), was a remarkable chess player.

John Cage,  an extraordinary innovator in music and sound production, who challenged our perceptions and introduced us to the value of music and silence, inventing new instruments, exploring new technologies, restless and inventive to the end.

Jean Tingueley, a force of nature, obsessed by building remarkable machines that have an unexpected life of their own, often destroying themselves in paroxysms of exuberance, built entirely of scrap and waste objects, transformed into anarchic constructions that are one of fhe ultimate expressions of movement in art.

Robert Rauschenberg, a singular charmer with German and Cherokee blood in his veins, a restless constructor of works in many styles, forms and materials, that mark his remarkable trajectory through his fecund imagination, symbolised by his  ‘combines’, most famously the angora goat with a tyre round its middle

Tomkins is a remarkable and meticulous writer who had the great privilege of meeting and talking with all four men while they were alive, capturing the sound of their voice and their characters, allowing us to get up close and intimate through his detailed observations and careful documentation of their working lives, their surroundings and techniques.

Read this absorbing book and realise how much of our modern culture stems from their innovative thoughts, dreams, projects and products. So much great food for thought.

I love the introductory quote:

‘It is curious to note to what an extent memory is unfaithful, even for the most important periods of one’s life. It is this, indeed, that explains the delightful fantasy of history.’ – Marcel Duchamp