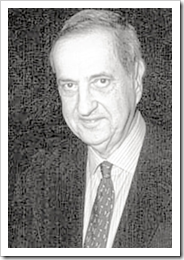 Sad to learn only today, via the obituary in The Independent that Abner Stein, the literary agent, died on the 12th January this year.

To myself and my colleagues at the Index of Possibilities, Abner was a very special person at that time in the early 1970s, when we became his clients. He agented our books until at least the mid 1980s. I think we were his second clients after Jamie Mandelkau, who introduced us to him.

We were just a bunch of young freaks with some bright ideas. He was the Man from New York City, with his raincoats and his connections. We got on like a house on fire.

Back in those days publishing was a different world. More drinking and lunching went on. Genuinely creative ideas could be got off the ground if you knew the right people – which Abner did.

We had great fun round his flat in Battersea and at our office in Blenheim  Crescent. Every time he would come to visit he would buy a bottle of retsina from the Greek mom and pop food store over the street. Inevitably and often we would get drunk and laugh the night away.

In those days it was all about the crack. Abner was very businesslike but also was genuinely game for a laugh. What fun we had.

The night I always remember was the end of a day when I had been to a press previews of ‘Rocky’ in the morning and ‘Mean Streets’ in the afternoon. I arrived at his flat pumped up to the max. I was striding round his kitchen bemoaning how difficult it all was. Abner just looked at me and said: “No-one said it would be easy John.”

I really loved Abner and am very sad at news of his passing. He will always be alive in my memory.

THE GENERALIST ARCHIVE: At first glance it seems only a few letters from Abner have survived in the correspondence files of An Index of Possibilities. Here are two of them: 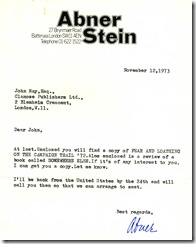 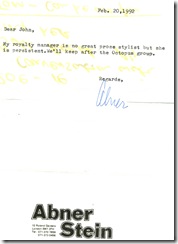