The  cave paintings have fascinated me since I was a kid and that excitement still stays with me. One aspect of the story that I later found particularly intriguing is the fact that three of the earliest and most important discoveries of cave art were made by children.

This account comes from the introduction to a book entitled ‘Beyond the Bounds of History’, which contains artist’s impressions of the life of Stone Age man by Henri Brueil, of which more anon


‘To the children, to the adolescents, I dedicate these. Perhaps, judging by what I have seen, some grown-up people may also take pleasure in them We certainly owe that much to the children.

‘Was it not the little five-year-old girl of Marcelino de Sautuola who, in 1879, whilst her father was digging in the floor of the cave of Altamira (Santander, Spain), was the first to see the great and magnificent frescoes on the roof, greeting them with a cry of  “Bulls! Bulls ! " (Toros ! Toros !) ? Although it is true that she now remembers nothing about it !


‘Was it not the band of lads at Montignac (Dordogne), led by Ravidat and Marsal, who slipped through a narrow shaft into the Hall of the Great Bulls on the 12th September, 1940, and thus were the first to see and understand the incredible frescoes of Lascaux (though their first emotion was fear))?

‘Was it not the three young sons of Count Begouen who, whilst exploring wide dark corridors in 1912-14, had the incomparable luck of finding one after the other the clay bisons of the Tuc d'Audoubert (Ariege) and the neighbouring sanctuary of the Trois Freres, with its horned God looking down on hundred: of admirable engravings ?

‘It is, therefore, to the children and adolescents and those older people who have known how to preserve their freshness of soul and imagination that dedicate these modest efforts. May they inspire some among them to become explorers or prehistorians! ‘ 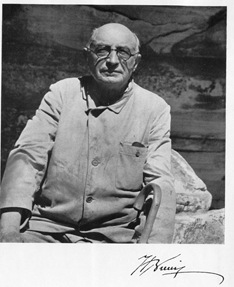 So who was Henri Brueil?

Henri Édouard Prosper Breuil (28 February 1877 – 14 August 1961), often referred to as Abbé Breuil, was a French Catholic priest, who spent his life as an archaeologist and paleontologist and was  the great pioneer in the study of cave art. He introduced both Lascaux and Altamira to the general public, travelled widely and made many discoveries.

His most famous work in ‘Four Hundred Centuries of Cave Art’, published in 1952. He was known as ‘the priest of palaeontology’ and ‘the pope of prehistory’.

SEE ALSO: Interesting essay on Brueil by Graham Johnston on Archaeology Expert
Extensive entry from the International Encyclopaedia of  the Social Sciences (1968)


This is a retelling of the discoveries of Lascaux and Altamira by the children’s historical novelist Hans Baumann. (22nd April 1914 – 7th Nov 1988).

The author’s profile in the back of the book says:
‘He was struck by the fact that many of the caves had been discovered by youngsters and has the good fortune to have as his guides some of the original discoverers. In Lascaux, Marcel Ravidat and Jacques Marçal told him of the thrill and the dangers of the first discovery. In Trois Frères he was taken to the caves by Count Louis Bégouën, who, as a boy, had been the first to negotiate the difficult entrance. Simon de Altamira, now a man of seventy, was his guide in Altamira.’

The story of a young cave boy who dreamed
of becoming a cave painter, written by US
children’s author Justin Denzel
[Lutterworth Press. 1988]
Cover illustration by Mike Wimmer.
[THE GENERALIST ARCHIVE]