PLANET EARTH: THE DEATH OF AMPHIBIANS 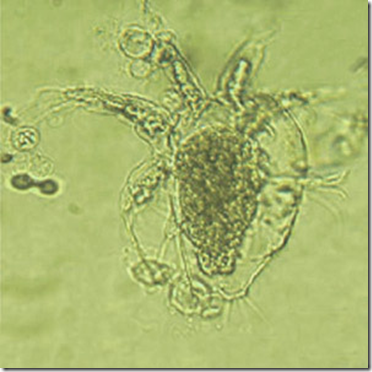 This amphibious fungus (Batrachochytrium dendrobatidis) is threatening to make the world’s amphibians extinct. 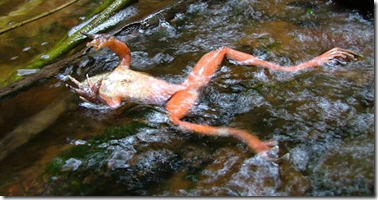 Read this powerful article in full in American Scientist: Lessons of the Lost by Joseph R. Mendelson III

Batrachochytrium dendrobatidis likely is capable of infecting every species of amphibian on Earth (nearly 7,000 species), representing the broadest host-range of any known pathogen.

Herpetologists and wildlife biologists began observing inexplicable disappearances of amphibians around the globe in the mid-1970s and especially by the mid-1980s but were at a complete loss to explain them. Finally, in the late 1990s, an insightful team of pathologists at the U.S. National Zoo, led by Don Nichols, collaborated with one of the few chytrid fungus scholars in the world, Joyce Longcore, and identified this quite unusual new genus and species. Conservationists and disease ecologists were unprepared for the reality of a pathogen capable of directly and rapidly—mere months!—causing the elimination of a population or an entire species that was otherwise robust.

The concept of a lightning extinction was foreign to researchers and conservationists, and we argued vehemently about it throughout the 1990s at symposia worldwide.

…the pathogen itself, was not described until 1999. While we were debating the issue, a terrible lesson was playing out for us around the world as an unknown disease decimated amphibian populations.

The concept of “endangered species” does not apply here. We are witnessing the nearly complete elimination of entire clades of species. This is another lesson learned, as we were all trained that such things are only to be observed in the fossil record. This precedent from the amphibians forces us to address the serious implications for possible disease-driven losses among other major clades. Consider for a moment the potential consequences of clade-level extinctions among monocot plants (corn, rice, wheat), pollinating insects, salmonids or scombrid fishes (mackerel, tuna), mammals or birds.

Conservationists have been overwhelmed by the amphibian crisis. In the atmosphere of ongoing declines, we realized that there was no framework to address a challenge of this magnitude or rapidity. Even worse than problems of scope and scale is the reality that conservationists, collectively, are stymied by the central problem of not knowing what to do

There is a parallel between what amphibian taxonomists do these days and what homicide detectives do. Both arrive at scenes of mayhem. Maybe they solve the crime, but they are powerless to undo it. 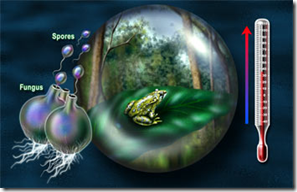 Recent studies show the Earth's warming climate is contributing to the increase of chytrid disease, a fungus infection that is responsible for the extinction of many tropical frog species. The fungus, Batrachochytrium dendrobatidis, infects tadpoles and eventually attacks the skin of adults and kills them. Scientsts know the spore stage can swim through water to infect other frogs, but there is still much to know about how the disease spreads, and if it can survive in other animals.
Credit: Nicolle Rager Fuller, National Science Foundation www.nsf.gov/news/news_images.jsp?cntn_id=105707&org=NSF

A powerful and moving gallery of photos by National Geographic photographer Joel Satore. 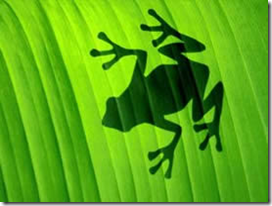 Our vision is the world’s amphibians safe in nature, and our mission is ensuring the global survival of amphibians, focusing on those that cannot currently be safeguarded in nature. 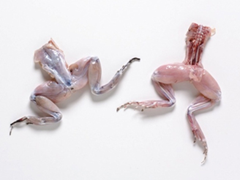 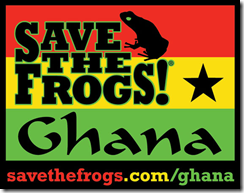