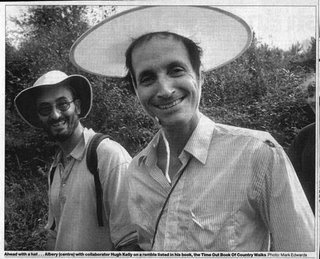 Founder and principal officer of the Institute for Social Inventions, Nicholas Albery was an innovative generalist widely respected, not only for having learned how to brainstorm himself and others to solve problems and produce new ideas, but also for testing and living them out.

The breadth of his thinking and the scope of his output was extraordinary. From the Global Ideas Bank (as he put it "the website of the Institute, it has extended this collecting of ideas to the Internet, with millions accessing the site every year") to the Natural Death Centre ("advising those wishing to organise green, inexpensive family-based funerals"); from the International Poetry Challenge Day ("individuals and schools take up the challenge to learn poems by heart to raise money for charity") to the Apprentice-Master Alliance ("a free service that links graduates or school-leavers wishing to learn a trade with small or one person businesses for long-term apprenticeships"), Nicholas has left his mark on society in a way that, in buddhist terminology, represents "the creation of merit for the benefit of all beings", although not a buddhist himself.

Nicholas was the collaborator, or catalyst, par excellence. He rarely claimed innovations as his own. Having realised early on in his life that information could be free and not withheld or possessed for some people to gain advantage over others, he then set about carrying this principle out with an almost manic energy.

His publications include The Book of Visions-an encyclopaedia of social innovations, Virgin, 1993; Poem for the Day, Chatto, 1994; Time Out Book of Country Walks, Penguin, 1997; Seize the Day (forthcoming), 2001. An Internet search for "Nicholas Albery" yields about 1850 items.

Born in 1948, he was one of 4 siblings in the theatre-land dynasty headed by Sir Donald Albery. Public school educated and an Oxford University dropout, he was equally a child of the optimistic sixties who never lost his early vision of the role that information could play in a society where computers are widespread. But rather than being a techno-nerd, he was interested in the social uses of information. In this sense he was a generation ahead of most of his peers in envisaging, in the late sixties, the socially beneficial uses of what has now become the Internet.

At age 19 Nicholas lived on complan for a year because he wanted to test its claim to be a compete food. At 29 he was a leading light of the Free Republic of Frestonia, an area of Notting Hill that declared itself independent of the UK in order to resist evictions and subsequent commercial development (they won). At 30 he stood as Ecology Party candidate in Kensington & Chelsea and got 800 votes, including the ballot paper marked with a heart instead of a cross which after lengthy debate was accepted as valid as it clearly expressed the voter's intent.

In the late 60's he ran BIT, the London-based alternative information service. In between finding crash pads and temporary work for allcomers he produced the first overland guide to India, complied from travellers tales. A cover of BITMAN magazine in the mid-70's shows him and Nicholas Saunders (the Neal's Yard/Covent Garden entrepreneur) walking naked down Piccadilly captioned "rehearsal for the year 2000".

The collaboration of the two Nicholases, Saunders and Albery, became the pivot for a raft of social innovations for the next quarter century; Albery as the socially involved ideas man who stayed up all hours with the computer as well as running a highly varied open-plan social life, Saunders as the entrepreneur risk-taker with the Midas touch. Sadly, each of them died in a freak car crash where the other passengers were unscathed, Saunders in 1998, Albery this past weekend.

To his friends he was supportive and showed great generosity and loving-kindness. For friends and strangers alike, he brought a sense of excitement to every occasion, challenging, always asking questions that got to the heart of the situation, and spilling over with ideas.

But perhaps his greatest contribution is as a role model for how to behave in our information-dense, technology-based society: trying to be inclusive not exclusive, always curious but not accepting the given as fixed or immutable, putting people before machines. The website www.globalideasbank.org is exemplary. When asked what one needs to become a social inventor he replied "a mentor who believes in you; to have run an enterprise when quite young; to be an artist with a creative mind".

His interest in country walks, which he managed to do once a week for many years, dates from his being diagnosed with the potentially crippling disease ankylosing spondylitis which tends to weld one's vertebrae together. Characteristically his response was to take a large amount of exercise to combat the problem head-on, and although he was no athlete he retained a glow of youth that eludes most of us in middle age. Unusually, he looked no younger in death than when alive.

Nick was a wonderful energetic and lively person who not only achieved a great deal in his life but also has left a vibrant legacy, much of which can be tracked at the site of The Nicholas Albery Foundation.

Spoke with Nick Temple who now runs the Global Ideas Bank, which spun off from the Institute for Social Inventions. Run by volunteers, it registers half a million unique hits a year.
at 10:35 am

Hi!
I am Josefine Speyer, the widow of Nicholas Albery and have just discovered your website, six and a half years after Nicholas' death.
It gave me great pleasure to read about Nicholas and his doings in such detail. You must have known him or interviewed him? I wonder.
I have just been at a Christmas gathering yesterday organised by the Saturday Walkers Club which is going strong 10 years after Nicholas first published his TimeOut Book of Country Walks. There are now about 200 people who are doing various country walks every week. They have built up a tribe of walkers, many of them used to walk with Nicholas. They have published the TimeOut Book of Country Walks 2. Apart from getting exercise and keeping fit, the groups are a wonderful opportinity for networking and wideing ones social circle. They also organise theatre outings and other events, and several couples who first met on the walks are now happily married.
When Nicholas first came up with the idea of a self oganising walking group, I could not believe this kind of thing would work, but it did! And wonderfully so.
The Nicholas Albery Foundation is now The Natural Death Centre, which also runs the annual Poetry Challenge in October every year.
Nicholas died before his time. Had he been alive today he would be deeply involved in getting projects off the ground that create sustainable community, helping create discussion and ideas to stop the destruction of the environment, the issue of terrorism and thinking about a future that would allow for 'nature to be at ease'.
As he had written on a piece of paper, which he kept stuck on his bedroom mirror:
"My purpose in life is to use my imagination, humour and perseverance, through my writing, my projects and my helping people fulfil their potential, so as to help create a world in which people are warm, tolerant and kind to each other, nature is at ease and magic is alive."

As former trustees of the Nicholas Albery Foundation we are writing to let
you know of major changes.
The various projects of the Foundation have been found new homes. The
Natural Death Centre continues with a new team.
We hope that you will continue to offer your support and are listing the
projects below, also see attachments.

The Nicholas Albery Foundation was renamed the Natural Death Centre (NDC) in
March 2007.
In June 2008 the NDC met financial difficulties. However, thanks to the
great efforts of a team of volunteers and the generous donations made after
a fundraising appeal, we have achieved stability. In parallel, we held a
formal consultation process on the best way forward, and are now pleased to
announce that a new board of trustees and manager has been appointed - a
fresh start, just in time for Spring!

The Foundation's work would not have been possible since Nicholas's death
without the tremendous work of the employees and many volunteers over the
years. We are grateful to Stephanie Wienrich, Nick Temple and Retta Bowen
for making it possible to form the NAF and help continue the work. And to
Rachel Hucknall, Mike Jarvis, Billy Magner and more recently Adeline
O'Keeffe and many more who kept it going. We thank them all and all the
trustees who gave their time and skill to further the social entrepreneurial
work pioneered by Nicholas.


We would like to take this opportunity to wish the Foundation's projects all
the best in taking forward Nicholas' work and creating their own visions
with it.


At this promising turning point Josefine and Neil are happy to stand down.
Susan will stay on a while as a trustee to complete the handover .


With great gratitude for your continued support over the years,


· Saturday Walkers Club
became independent in 2005. The NDC continues to receive royalties from the
Time Out Book of Country Walks (volumes 1 and 2). www.walkingclub.org.uk/

· Poetry Challenge and Poetry for Schools
trustees are in discussions over new homes for these projects.
Contact : Susan Morris (trustee) susan@naturaldeath.org.uk
The NDC continues to receive royalties from Poem for Day (volumes 1 and 2).
The next London Poetry Challenge Event is on Sunday 17th May 2009.
http://ambg.co.uk/poetry/

· Gomera Alternative Walks Book (8th edtn)
self published via the Foundation, this is planned to go to a new home.
Contact : www.gomera.org.uk/ Susan Morris (trustee)
susan@naturaldeath.org.uk

· The Apprentice Master Alliance was closed as a project 2006.
The London Befriending Network closes as a company/charity in 2009 though
its volunteer service ended in 2005.
Details of both : Susan Morris (BN trustee) susan@naturaldeath.org.uk