This beautiful and remarkable music documentary about the singer/songwriter Rodriguez is genuinely uplifting. HIs two albums recorded in the 1970s did nothing in the Western marketplace but in South Africa under the apartheid regime, the album ‘Sugar Man’ was considered a stone cold classic and sold some half a million copies. Nothing was known of Rodriguez himself and the film documents the search that began to find out the truth about this extraordinary songwriter. Its fantastical. 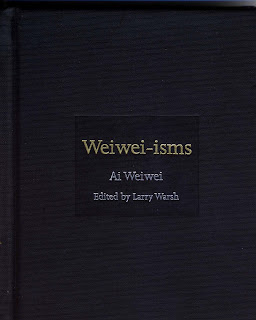 This wonderful little book of memorable quotes from the Chinese artist Ai Weiwei – culled from his numerous videos and posts on His blog and Twitter – encourages us to accept the challenges of life and to use our time on this earth to stand up for human rights and a better life for all. Weiwei is the most important artist of our time who has developed the art of the brief phrase as cultural statement. This little book consciously sits in a continuum from Confucius to Mao to now. Here are a few Weiwei-isms to give a taste and flavour of the whole.

My favourite Word ? It’s “act”.
*
It became like a symbolic thing, to be “an artist.” After Duchamp, I realised that being an artist is more about a lifestyle and attitude than producing some product.'
*
Life is never guaranteed to be safe, so we better use it while we are still in good condition.
*
My current situation is, I always want to find a new possibility. China is in a changing stage, and that puts me in a very difficult situation, because anytime a new condition is announced there is a lot of struggle between the new and the old. So the Establishment really became extremely nervous because they are refusing to meet very basic human rights or values. I don’t know how long I can still struggle in China, but I will try my best. because this is a land I am very familiar with, and we have been in the same kind of struggle for generations. I think its a time for change.'
*

‘Weiwei-Isms’ is edited by Larry Warsh and published in 2013 by Princeton University Press to coincide with the exhibition of Weiwei’s Circle of Animals/Zodiac Heads. See: ww.zodiacheads.com/

The great American poet Jack Gilbert died recently.
Here he is in action. His work is powerful and moving.
NY Times obituary