This post is triggered by viewing a great documentary ‘Eames: The Architect and the Painter’. produced and written by Jason Cohen and released in 2011.

Its a great tribute to and celebration of the energy, ingenuity and creativity of Charles & Ray Eames and the highly talented team they assembled in their studio at 901 West Washington Blvd, Venice, California to realise a wide range of creative projects over a 40-year time span.

In a sense it follows on from the Previous Posts about the history of Polaroid and the genius of their contemporary Edwin Land. Also links to my post on Significant Others – a study of creative artists who also share a personal relationship.

Charles was principally an architect and Ray was a painter but their collaborations spilled out into numerous forms of creative enterprise principally centred on design and communication. Their best known work were the Eames chairs and other pieces of furniture –  40-50 in all, in production for more than five decades. These iconic items exemplify their approach to industrial design – the best for the most for the least.

The funding from this hugely successful enterprise enabled them to establish their studio and branch out into other fields – principally architecture, film making and major corporate communication projects including exhibitions and pavilions for World Fairs.

Charles was fascinated by the process of design – he believed there was no good design without restrictions and rules – and by the wonders of everyday life and the world that science was revealing. He relied on his partner Ray, to whom he was intensely bonded, for her exquisite taste. She collected hundreds and thousands of objects that caught her eye and is described as ‘Queen of all Pack Rats’. They lived together in a house that Ray had designed and lived surrounded by their own aesthetic.

The Eames’ multimedia approach, which included extensive model making and documentation on film and in photos, and the huge range of projects they undertook, meant their studio was constantly buzzing with individual designers and artists working closely together to realise the Eames’ visions. 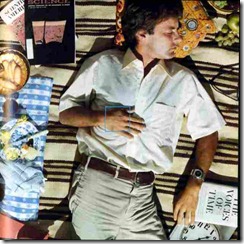 One of their great achievements is the short film ‘Powers of Ten’ which was hugely influential and remains to this day a masterpiece of scientific communication in its elegance and brevity. They made more than 100 films, an oeuvre which the film director Paul Schrader considers their own genre.

Charles was handsome, charismatic, brilliant yet laid back and cool. His business dealings were remarkable. There were no contracts with his major clients. Everything was done on a handshake. Plus there were no budgets. Eames just said he did not know how much it would cost and his clients went for it, such was his reputation.

This film is a beautiful and inspiring tribute to the Eames whose achievements still resonate today.

This is a still from the 1953 film ‘A Communications Primer’ – an early attempt to present communication theory, made to encourage the breaking down of barriers of thinking between disciplines and to discourage thinking of communications in a limited way. Music composed by Elmer Bernstein.

A Virtual Encyclopaedia of all things Eames

THE GENERALIST library contains a number of books on the Eames, all of which are highly recommended. 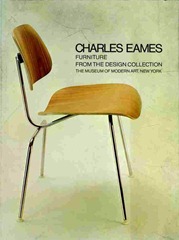 This is the  5th Printing (1987) of a 56pp catalogue,originally published in 1973 -  a survey of the furniture of Charles Eames held in the Design Collection of the Museum of Modern Art in New York. Here is an extract from the Introduction.

‘Charles Eames has contributed at least three of the major chair designs of the twentieth century.

‘His work has influenced furniture design in virtually every country, and his mastery of advanced technology has set new standards of both design and production. The first of his chairs, executed in collaboration with the architect Eero Saarinen (1910-1961) emerged from a 1940 Museum of Modern Art competition. Since then furniture by Eames has been mass-produced in quantities that must now be counted by the millions.’ 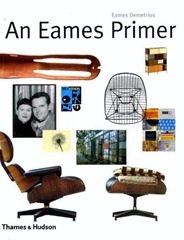 ‘An Eames Primer’ [Thames & Hudson. 2001] is a fabulous book by Eames Demetrios, one of Charles & Ray’s grandsons, who is a multimedia designer, filmmaker and director of the Eames Office in Santa Monica.

It aims (and succeeds) in its purpose of ‘giving the reader an understanding of the key projects, themes and ideas, and arcs of the lives and works of Charles and Ray Eames.’

‘Charles and Ray were design revolutionaries whose slogan was “innovate as a last resort.” They often sought the universal in the specific. Charles saw their work as an extension of his architecture, and Ray saw it as an extension of her painting. They eschewed self-expression for its own sake, but the work they created as husband-and-wife collaborators speaks with a single voice. And yet these pairings are intended not as paradoxes, but rather as dimensions of the same way of looking at the world. I believe Charles and Ray consistently drew from this deeper well. This explains the seamless connections in all their work because, as important as any of the objects they created are, the philosophy behind them is even more important.’ 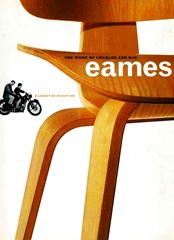 ‘The Work of Charles and Ray Eames: A Legacy of Invention’  [Harry N. Abrams.1997] was published to accompany an international travelling exhibition organised by the Library of Congress and the Vitra Design Museum. It includes signature essays from a variety of authors, accompanied by a wealth of visual material. The Eames Collection at the Library of Congress contains almost a million items which, writes James H Billington. ‘reveals the Eamses as important American innovators, thinkers, and entrepeneurs who operated beyond the traditional boundaries of design.’ 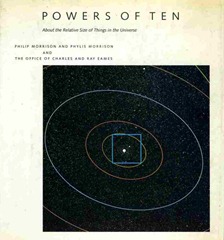 This is the ‘Powers of Ten’ book produced by Tony and Philip and Phylis Morrison published by the Scientific American Library in 1973. It is based on the ‘brief and beautiful’ film  produced by the Eames Office - ‘Powers of Ten: A Film Dealing with the Relative Size of Things in the Universe and the Effect of Adding Another Zero.’ 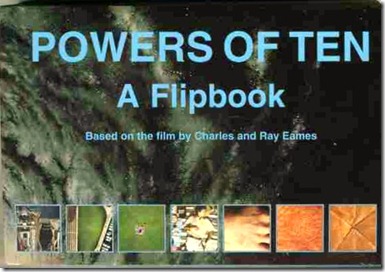 A journey through the universe in 42 steps from the largest known dimension to the smallest. Flipbook produced by Optical Toys of Putney, Vermont. 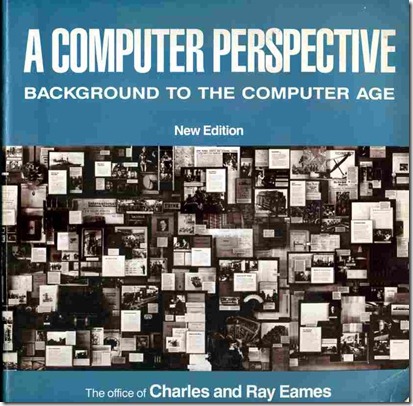 This book has always fascinated me.

Its a documentation of an exhibition the Eames Office did for IBM - conceived in 1968 and assembled and exhibited in 1971 in the old IBM World Trade building, where it was on view until 1975.

The main part of the exhibition was this History Wall showing the development of computing. This consisted of six cases or panels – 8ft wide and 3ft deep, stretching from floor to ceiling – one for every decade from 1890 to 1950. In each panel, text, documents and objects were arranged chronologically but also three-dimensionally, producing a ‘hypertext’ feel.

This is a revised edition published by Harvard University Press in 1990.