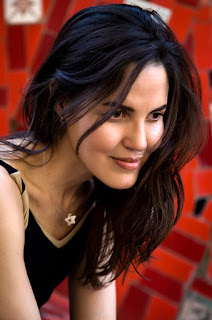 São Paulo born, Mônica Vasconcelos has over the last decade become one of the most successful Brazilian artists working in Britain with seven albums to her credit and a long string of headline concert tours, festival appearances and support slots for the likes of Bryan Ferry, Gilberto Gil and Courtney Pine.

Her latest album, The São Paulo Tapes, features her own versions of protest songs from the 1960s, penned during the dark years [1964-1985] when Brazil was governed by a harsh military regime. Outright protest was banned and these songs use coded metaphors to get their anti-government feelings across. Even  so, many musicians were arrested, tortured or exiled during this period. In the hands of Mônica and her excellent band, these beautiful tunes and heartfelt songs are brought back into the light of day at a time when Brazil is still racked with protest and uproar. The album, produced by Robert Wyatt, is officially released in November but is available for purchase now on Mônica's website. She and the band will be touring the UK and Europe later this year. In a message to THE GENERALIST, Monica writes about her project:

'What do you do with a selection of perfectly formed Brazilian songs written 50 years ago in defiance of a military dictatorship? If you are singer Monica Vasconcelos, you travel to São Paulo and invite a fine guitarist of the Joao Gilberto line (Ife Tolentino) into the studio with you. You record the songs and smuggle the secret files - now The São Paulo Tapes - back to London. Then, you lure the great Robert Wyatt out of retirement to produce the album. He's never produced an album before but you know he will fall for this music because it is right up his street: resistance music. Dangerous, forbidden songs, carrying secret subversive messages in them. A year later, what comes out of this  encounter between Robert Wyatt, Monica Vasconcelos, a bunch of musician dudes and Brazil's finest song poets is an album of powerful music that feels incredibly current. Uncover the secrets hidden in The São Paulo Tapes. Beautiful songs addressing universal themes. Love. Freedom. Justice.'

The other big musical movement in Brazil in the '60s during the reign of the junta was Tropicalia - a coming together of free souls, experimenting with adding world rock and pop styles to Brazilian genres, cutting things up and making new possibilities.

This wonderful musical and artistic counter-cultural flowering is documented by Mônica in a fantastic radio documentary for the World Service - 'Tropicalia: A Revolution In Sound'. It is truly inspiring, featuring as it does, many great interviews with the movement's movers and shakers.

The images come from the excellent and informative 48pp booklet which accompanies a brilliant Tropicalia compilation of music by Gilberto Gil, Caetano Veloso, Gal Costa, Os Mutantes and Tom Ze, which came out from Soul Jazz Records, based in London's Soho, in 2005. This is totally groovy stuff.

These are two great compilations of Brazilian music put together by David Byrne back in the day (1989) on his label Luaka Bop.

The first ranges across a wide variety of styles; the second, as the title suggests, is focused on samba. There is a third in the series which I need to get.


To bring things up to date, delighted to discover the brilliant SOUND AND COLOURS site which carries news, interviews, videos and mixtapes from all the major Latin American countries. This is a real exciting site featuring fresh music from the streets. I love this compilation from Brazil, posted in 2016.


BIXIGA 70: If this Sao Paulo band don't knock your socks off nothing will. Great band playing one gig in London at the Jazz Cafe on July 25th.