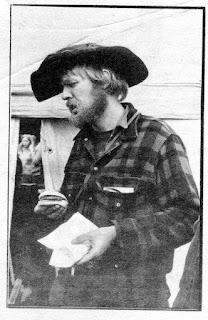 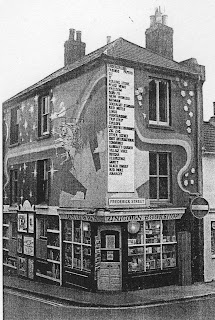 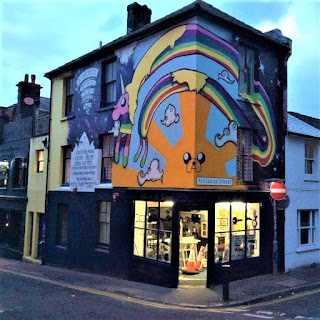 Almost four years ago THE GENERALIST published a post on

Bill and his partner Mike, established this great Beat/Psychedelic bookshop and the building was decorated with a wonderful mural by Brighton artist John Upton.

When I was 18/19 years old, I knew these guys and the shop very well. I regularly went there to use their mimeograph machine to print our small magazine called 'Swan'. Full story in this Previous Post which was triggered by meeting Terry Adams who, for many years, has been assembling material on Bill and the Unicorn. Photographer Barry Pitman is also working on interviews with people who knew Bill well. He tells me that Graham Greene described Unicorn as 'one of the most interesting bookshops in Great Britain'.
*

There is a really excellent summary 'Bill and the Unicorn' by Jackie Fuller on the North Laines Community Association website. This is followed by numerous comments and memories by others who remember Bill and the shop.

More information on the legal problems Bill Butler had are highlighted in this interesting post: "A DIRTY AND DISEASED MIND": THE UNICORN BOOKSHOP OBSCENITY TRIAL By Mike Holliday

'Aloes Books was founded by the printer Jim Pennington and two poets from the alternative poetry scene, Allen Fisher and Richard Miller.

“I was in Brighton in 1967, the year Bill Butler opened his Unicorn bookshop, and I became part of the scene around the shop," says Pennington. "Bill was more than just a bookseller – he was a presence.

'Through the shop, and the wider Brighton arts scene generally, I met a lot of interesting and inspiring people, people like Nick Heath and Jim Duke, well-known and active anarchists whose enthusiasm and spirit-warming influence had a great effect on me, and also the mural artist John Upton, who made me think more visually back at a time when street decorations, murals were the new thing.

'What was good about Unicorn was the fact that the people who worked there, and some of the people who went there, had a harder, more political edge to their thinking. They were hippies but not the bells-and-kaftans type. Each visit to the shop was an exploration, because I would often visit not specifically looking to buy something but looking to be guided to something, often American which you couldn’t get easily elsewhere.”

Unicorn helped Pennington along the road to becoming a printer/publisher by allowing him to experiment on their machine. It was the start of a passion for the printed word that remains with him to this day.'

A couple of years ago, on a visit to Brighton, I noticed that the original bookshop building was for rent, I got the estate agent to show me round and asked if it was possible either to uncover the original mural or paint a new one. In the end, I couldn't raise the necessary finance. 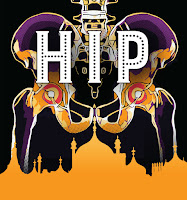 Then I met Jolie Booth who runs an outfit called Kriya Arts in Brighton. She had squatted a building in the 80s and discovered the diaries and letters of Brightonian Anne Clarke, who was prominent in the alternative cultural movements in the town, Jolie made this information into a successful one-woman theatrical show in 2016. This year, as part of the Brighton Fringe Festival, she is conducting a walking tour -an immersive journey through the streets of  1960's/1970's Brighton -  exploring places that Anne wrote about and explaining how she left an imprint on the city. Details of this Hip Trip are available here. 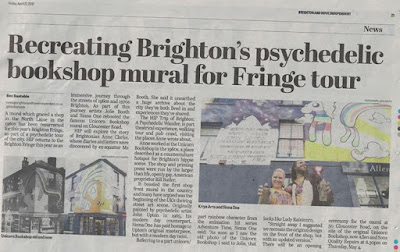 One of the stops on the journey is the former Unicorn Bookshop where Anne worked for a period. This gave Jolie the idea of rebooting the mural. She managed to persuade Brighton Council to fund the project and to get Sinna One (whose rock murals grace The Albert just up the road) to paint it. When he saw the photo of the original mural, he immediately thought of the character of Lady Raincorn from the animated series 'Adventure Time' which forms the main part of this new artwork. Congrats to all concerned. An opening ceremony celebrating the new Unicorn frontage will be held on May 4th at 6:30pm.

PS: Jolie Booth has also written a novel 'The Girl Who'll Rule The World' published in 2016 by The King's England Press. The blurb claims: 'This book is 'Fifty Shades'or the Trainspotting generation, 'Fear of Flying' for pill poppers or 'Bridget Jones' for  those who are so off their faces they can't remember what happened yesterday.'