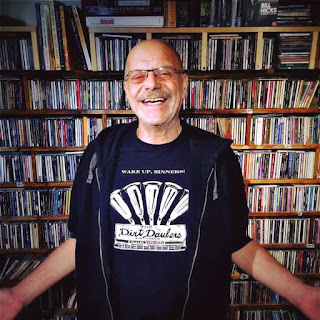 BARRY MARSHALL EVERITT: A LIFE IN MUSIC is a work in progress, a tribute to a rock 'n' roll brother who recently died of cancer. Barry was a true force of nature who lived his life on the edge and on the road, in the service of the music he loved so much. Barry worked as a sound engineer, radio DJ, booker, road manager, journalist, promoter. He got the taste for the old school rock 'n' roll underground way of doing things and made that his lifestyle of choice.

Born 8th November 1947, the first trace we have of his musical activities comes in the time period 1964 to 1966 when he was a drummer and/or singer with two blues band 'Hobo James' and 'The Farm'.

During the period 1966 to 1969, he turned to journalism. He was sports reporter for The Romford Times and  the Stratford Express and, more importantly for this narrative, worked freelance for various ‘underground’ publications including Frendz, International Times  and Oz.

'This is the 40th Anniversary and sadly many of the team are now not with us. We have lost Hugh Nolan, and the backers Jimmy Miller and Tony Secunda and this 2010 show is dedicated to them and in particular the free-form musical direction given to the station by Hugh Nolan.

'Radio Geronimo was the first European free-form radio station, broadcasting from Hitler's propaganda radio transmitters built in Monte Carlo in 1940. The signal was heard over the entire continent and even though it was a legal transmission it was referred to as a pirate by many countries, including the UK, it's free form non programming and use of very free speech seemed to upset the British Government and the BBC started to jam the signal, Radio Geronimo hit back by "jamming" the BBC headquarters in London with strawberry jam, Hugh & Barry were arrested and made the front page of the daily papers creating a massive new audience.

'The success of the station also riled other broadcasters and as often happens other companies bought there way into Monte Carlo and by November 1970 Geronimo was off the air and became a legend.'

Hugh Nolan died in Australia on 3rd November 2009 after a long fight against cancer. Barry wrote a touching tribute to his dearest friend:
'So bless him, peace be with him and remember all the great radio, writing and love he gave to the world ..... if only more people could have his sense of being on the planet we would be in a far, far better place now.'

The full version can be found on The Pirate Radio Hall of Fame together with a great piece on Hugh by Ian Anderson containing much more information on the story of Radio Geronimo.
See also: www.radiogeronimo.com.

"There was something in the air and it was magic"

'Radio Geronimo - Monte Carlo and Bust' is a great little film by Chris Bent and Mark Pezzani. Barry is the main presenter and great fun regaling us with his version of events.

Why Geronimo: "That's what people say when they're thrown out of aeroplanes. We also liked  [American Indian] Geronimo because he was a rebel./"

He says of Secunda: "I'd never met such a scoundrel as Tony - an ex-wrestling and boxing promoter. What a dynamite guy. He was old school rock n roll and I got a taste for it."

Of Geronimo: "We didn't have any censorship. It was a joyous time when you could speak your mind. We were doing things for Vietnam draft dodgers, linking them up, We were not political left or right. We were anarchists, gentle free-loving hippies

When the BBC tried to jam Radio Geronimo's signal with their transmitter in Folkestone, Barry and others bought 18lbs of strawberry jam, alerted the press and then went to Broadcasting House and "jammed" them. They got arrested and spent a night in jail.

Geronimo went out for nine months in 1970, midnight broadcasts three nights a week, which could be heard all over Europe, the UK and North Africa. The programmes were recorded at 1 Harley Street in London and broadcast via the 400kw Radio Monte Carlo transmitter on Mont Agel, 1.300m above Monaco. It wasn't a pirate station because it wasn't at sea and it wasn't illegal but it was playing radical and adventurous music. 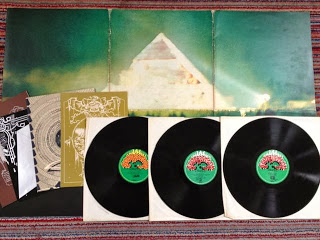 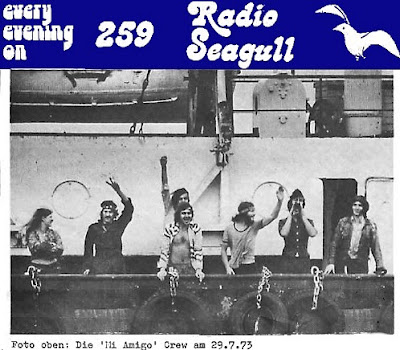 Ian Anderson writes that, after the demise of  Radio Geronimo:

'Hugh went off to Afghanistan for a time. He was not to reappear on the airwaves until the summer of 1973, when Ronan O'Rahilly, the owner of Radio Caroline, and Andy Archer, the programme director, decided to launch Radio Seagull as a progressive music radio experiment. Hugh and former Radio Geronimo colleague Barry Everett were approached to take part and they went out to the radioship Mi Amigo off Scheveningen, in the Netherlands, with the record collection from Radio Geronimo.


'Hugh Nolan stayed on board the Mi Amigo for one stint, from 11 August 1973 until 24 August 1973. An article in the Observer newspaper named Hugh the best DJ on radio, but he refused to go back on board, despite the persuasive attempts of Ronan O'Rahilly. He said that he was never paid for his two week stint on board.

'In late October 1973 the Geronimo record collection was piled up separately in the downstairs record library on the Mi Amigo. But the records were never returned, despite attempts to do so around about 1977. Some were believed to have been stolen and others went down with the sinking of the Mi Amigo in 1980.' 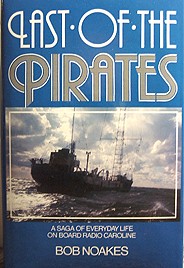 
'...Hugh and Barry arrived with their hash pipes and crates of underground records, and above all, with the total blessing of Ronan who had sent them across to us....

'...Radio Seagull had become established. I was to spend the next few weeks on board in the company of some very strange people who were operating what had become possibly the strangest radio station in Europe.

'Our two new djs had given the station a distinctive new ultra-progressive sound that I found neither good nor bad - I simply didn't understand it.

'...Barry and Hugh were undoubtedly professional, but their choice of music was so heavy and often so obscure that they could have only been reaching a small percentage of the available audience. The emphasis was on old Dylan tracks with plenty of Zappa and Beefheart. Later in the evening came some of the more horrisant music that only the most erudite of listeners would have been able to understand...

'...The emphasis on drugs had also become much greater and this was reflected in the programmes; a special jargon had come into use which some of us could not understand. The station, and everything about it, had become so avant-garde and freaky that it was totally far out...

.'..Barry and Hugh were night-people who seldom saw the light of the sun. They slept by day and arose at about four in the afternoon to choose records for the evening's programmes. Their breakfast was usually a cup of tea and a thickly rolled joint which provide them with enough lethargy to stagger through their work and get high on the strange and fantastic music they selected....'


In July 1973 a number of ex-Geronimo DJs, including Barry, launched Radio Seagull from the Caroline ship, then anchored off Holland. Barry broadcast on Radio Seagull until September that year, then moved to America where he was heard on various radio stations (KSML, KFAT, KDKB and the syndicated Rock Around The World programme). Source: www.offshoreradio.co,uk

Barry's own professional profile listings on the site MusicTank carries the following details:

He also worked as a stringer for the European Edition of Rolling Stone, contributing stories to the regular column  'Random Notes' and worked freelance on music stories for the Daily Mirror.
During this period he also mixed a Pink Faries album  [Possibly 'Previously Unreleased' (1982) or 'Human Garbage# (1984)

In 1999 he took over as booker for The Borderline when it was a dying venue and was given six months to make it work - which he did by cancelling all the existing gigs and pulling in every Americana act he could. Within a year he'd turned it right round and over the next six years created an important central London home for Americana and other  cult genres. In 2001 Time Out magazine rated it as Venue of the Year and voted Barry Promoter of the Year.

During this period, Barry established Borderline Radio on the club's website to promote upcoming shows and to highlight new Americana bands. When Live Nation ended Barry's contract, he left but took the radio station and changed its name to House of Mercy. He'd previously discovered that the Borderline  was in a building that used to be a refuge for prostitutes run by the nearby church of St Barnabas. It was called the House of Mercy.

This substantial 2012 video interview by UKmusiccity is first class and really underlines
Barry's extensive hard-won experience in so many different aspects of the music business. A master class including some wonderful anecdotes, topped by an amazing story about a John Lee Hooker gig that never quite came off.

Following his marriage to the British blues musician and songwriter
Bex Marshall, Barry changed his name to Barry Marshall-Everitt.

A mark of his professional standing is that Joan Armatrading personally selected Barry as her tour manager for much of her final 235-date world tour in 2014/2015.

Final personal note: My most vivid memories of Barry are from the time in 1979 that I stayed in his flat in Los Angeles, perched above Hollywood Boulevard, during two trips I made to the city that year. Coincidentally recently found the original negatives of the films I shot at that time. Here is one of my favourites: Barry's two-tone shoes. 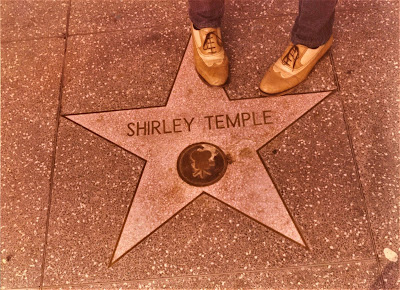