ACTIVISM: THE TOLPUDDLE MARTYRS, THE ANGRY BRIGADE and GRAPHIC PROTEST 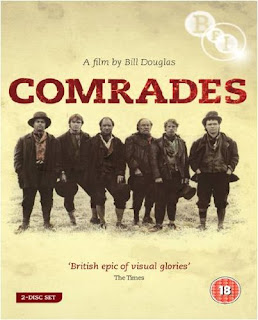 The Generalist enjoys the chancy nature of fishing for good DVDs in charity shops. This 3-DVD set is a treasure - the 1986 film 'Comrades' about the Tolpuddle Martyrs (3hrs 3mins) directed by Bill Douglas, in Blue Ray and DVD formats, and a great third disc of Extras, mainly interviews with the director. It was a great pleasure to watch the film for the first time with Shirley Collins, widely regarded as the queen of British folk music, who had never seen it either.

The Tolpuddle Martyrs site is a good place to get up to speed on the basic story of how, in 1834, a group of farm workers in west Dorset formed what is widely considered to be one of the first trade unions in Britain. At that time unions were legal and were growing fast but the six leaders of the Tolpuddle workers were arrested for taking an oath of secrecy. Sentenced to be transported to Australia for seven years, their case triggered a massive national protest, with thousands marching through London. Numerous petitions and meetings calling for their release helped to strengthened the union movement. There is annual festival celebrating their memory in Tolpuddle every year (19-21st July).

This little-seen film is a curio of great interest. The main part of the narrative is based in the Dorset landscape and is beautifully conceived and filmed on rich coloured film stock. The six largely unknown lead actors are superb, as are the women and children. Their suffering and emotional lives are realistically portrayed, the period is cleverly evoked, the costumes are great and the narrative skilfully unfolds, capturing your deep attention and touching your sensitivity.

The second shorter section, shot in Australia, is, by contrast, harder to like.The prisoners are split up and we follow their different fates. The landscapes are dramatic but the filming and the stories are rambling and less skilfully told and edited, with throwaway cameos by Vanessa Redgrave and James Fox. 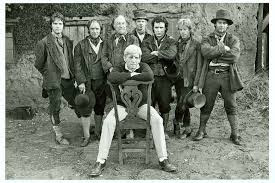 A delightful aspect of the film reflects Bill Douglas passionate interest in the early years of optical instruments leading up to the silent cinema days. Thus characters appear throughout the film from that early world of moving images. Alex Norton who plays 11 roles in total, opens the film as a travelling magic lantern entertainer, and is later seen as a Diorama showman, a silhouettist and a mad photographer.

As well as making films, Bill Douglas (b.1934) and his friend Peter Jewell assembled a remarkable collection of over 50,000 items which, after Bills death in 1991, was gifted to the University of Exeter to found The Bill Douglas Cinema Museum that now houses one of the largest collections in Britain of material relating to the history of the moving image.

Bill's other work for which he was best known was  an influential trilogy which harks back to his impoverished upbringing in the early 1940s in Scotland. According to IMDB : 'Cinema was his only escape - he paid for it with the money he made from returning empty jam jars - and this escape is reflected most closely at this time of his life as an eight-year-old living on the breadline with his half-brother and sick grandmother in a poor mining village...Later he works in a mine and in a tailor's shop nefore he is conscripted into the RAF, and goes to Egypt, where he is befriended by Robert, whose undemanding companionship releases Jamie from self-pity.' 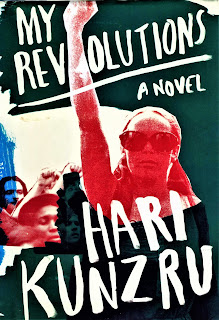 On the Acknowledgments page at the back of this remarkable novel (thanks to Mick B for the tip-off), the author Hari Kunzru writes:

'Certain things are always erased or distorted in a novel and this is no exception. It seems worth saying that it is not a representation of the politics or personalities of the Angry Brigade, which carried out a series of bomb attacks on targets including the Police National Computer and the Employment Secretary's house in the early seventies. Readers who want information about the Angry Brigade are directed to the papers of the Stoke Newington Eight Defence Group, and writing by Gordon Carr, Jean Weir, John Barker and Stuart Christie.'

I remember those days at the end of the 60s/early 70s when everything was happening every week and it was scary and exciting.

This novel captures the energy of that time and sweeps you along right from Page One as we join the assault on the US Embassy in Grosvenor Square, guarded by riot police with truncheons on horseback.Hunzru's novel has several narratives interweaving with each other, back and forth, and several mysteries. I was hooked for three or four days. A great read. 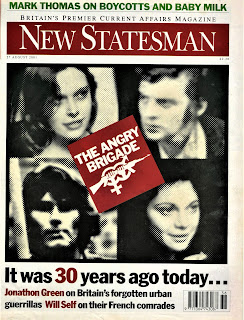 
Look back in anger


They were the British Baader Meinhof, '70s icons of the radical left. Thirty years ago, the Angry Brigade launched a string of bombing attacks against the heart of the British Establishment. No one was killed, but after a clampdown on the 'counter culture' and amid accusations of a Bomb Squad 'fix', four radicals were sentenced to 10 years in prison. Now, for the very first time, two of the Angries break their vow of silence.' 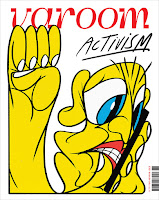 This is the Activism issue of VAROOM, the bi-annual magazine of theAssociation of Illustrators.This issue is still available here. One of the keynote essays 'Graphic Protest'  written by Margaret Cubbage, an independent curator, explains the role graphics have played in protest and campaigns for change. This is a valuable issue, beautifully designed.
at 11:04 am