THE ART OF THE MIMEOGRAPH: A SYMPOSIUM /ALT GAR BRA 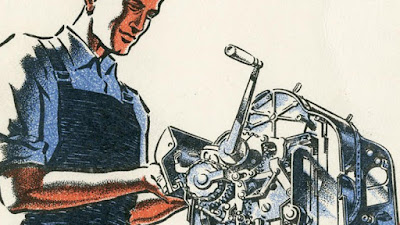 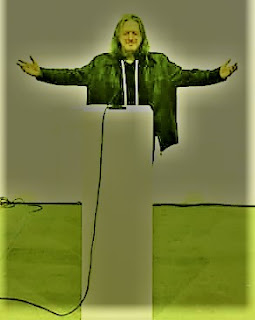 It's taken THE GENERALIST a week to get around to writing about the Mimeograph Symposium at the University of Westminster campus on London's Marylebone Road, in a giant industrial basement area, painted white, three floors down.

This picture was taken the afternoon before the event started. Just loaded and checked the Powerpoint presentation - on two screens. All looked great and I could feel some adrenaline flowing. I turned round and welcomed the absent audience. My friend Peter Messer commented on Facebook: 'He's not the Messiah, he's just a very naughty boy.' Brilliant! Enjoyed the whole experience. 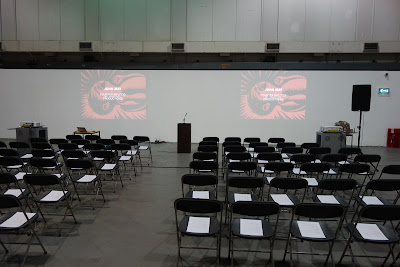 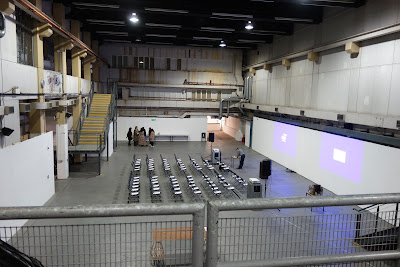 'The stencil duplicator or mimeograph machine (often abbreviated to mimeo) is a low-cost duplicating machine that works by forcing ink through a stencil onto paper... Mimeographs...were a common technology in printing small quantities, as in office work, classroom materials, and church bulletins. Early fanzines were printed with this technology, because it was widespread and cheap. In the late 1960s, mimeographs began to be gradually displaced by photocopying.' [Wikipedia]

Alt Går Bra is a group of visual artists researching the intersections between art and politics through discursive events, exhibitions, and publications. Their title is Norwegian for Everything Goes Well. 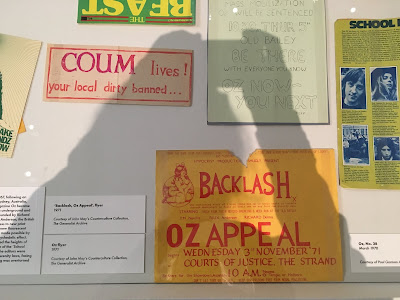 10:15 John May  The Generalist Archive's Mimeo Publications, History of the Underground Press Syndicate and UK Publications 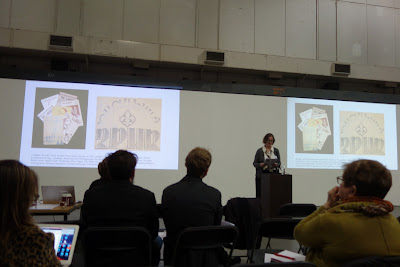 [In reality,Teal Triggs gave her interesting talk on the great punk zines [Ripped & Torn/Sniffing Glue etc] in the 12:15 slot. Then we had lunch and I had  to leave.

14:55 Rob Hansen & Oscar Mac-Fall The Mimeograph and Science Fiction Fandom in the UK

[Got to talk with Rob who showed me some copies from his massive archive of historic SF mags. He is one of three major collectors in the UK of this prolific stream of small print publications. The graphic cover art is amazing in many cases]

Friday 8th February
9:20 Lawrence Upton Writers Forum or How to Use the Gestetner Duplicator to Try to Change the World

[Douglas is based at Manchester University and was recently involved on the revived and republished edition of Jeff Nutall's '60s classic 'Bomb Culture'. SEE PREVIOUS POST ]

12:15 Ueno Hisami Mimeograph: The Fertile Field Between Industry and Art in Modern Japan

Closing Performance by Cephalopedia  Kitchin Publishing - Chopping up the Past and Stapling it Together: A Homage to Martha Hellion and Takako Saito, and in memoriam Felipe Ehrenberg

Big Thanks to Oscar and ALT GRA BAR. Thanks to Keane, Raphael, Jerome and Richard who sent me a Guardian article by Sam Leith on the boom in books on how to speak in public  - and a message on a postcard. 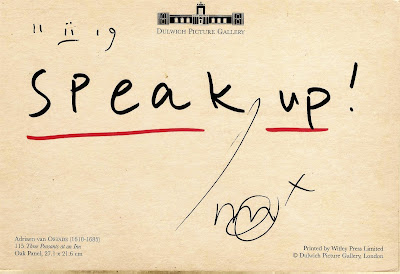