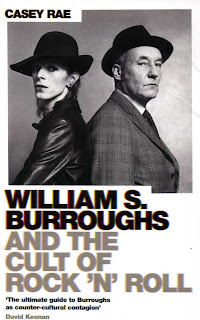 It's been a long time since there was something to get excited about in the publishing world but the launch of the new White Rabbit  imprint is worth celebrating as it's being run by Lee Brackstone who has already carved out a reputation as one of the best publishers in the business due to his success over many years at Faber where he had a fine list that contained many gems including 'England's Dreaming', the great history of punk by Jon Savage, He writes:
‘I feel blessed to have this opportunity to create what will be a radical and surprising list from scratch in a new environment. I believe we are living through a great moment for music writing, and I intend to build a list that is expansive, experimental and commercially ambitious. I wanted a name that captures a psychedelic sensibility with a literary feel. Alice in Wonderland was the first book I remember reading as a child and Grace Slick is a righteous force in the history of rock n roll. FEED YOUR HEAD!’
His launch title is an indication of the kind of quality and originality that Brackstone is seeking. 'William S. Burroughs and the Cult of Rock 'N' Roll by Casey Rae. Judging by his Wikipedia entry, Rae has a wide range of interesting credentials and experience which he brings to bear on this fresh study of Burroughs' effect on the modern music counter-culture.

Casey Rae (born May 23, 1974) is a music business executive, musician and cultural critic, as well as a technology, music industry and media professor. Rae currently serves as Director, Music Licensing for SiriusXM, the North American satellite radio service. He previously held the post of Chief Executive Officer for the Future of Music Coalition, a national nonprofit education, research and advocacy organization for musicians. He is an adjunct professor in Georgetown University's Communications Culture and Technology graduate program and faculty and course author at Berklee College of Music. Rae has written several scholarly articles on matters relating to intellectual property and new digital business models and has testified before Congress on copyright. He has maintained a website, The Contrarian Media, since 2006, which publishes articles on issues ranging from the economics of cultural production to the surveillance state to esoterica. Rae is also the owner-operator of Lux Eterna Records, a Washington, DC-based record label specializing in art-rock, experimental pop and avant-garde music. Over the years, Rae has contributed music criticism to Dusted Magazine, Pitchfork and Signal to Noise. His first book, The Priest They Called Him: William S. Burroughs & The Cult of Rock 'n' Roll is published by University of Texas Press in 2019. A second nonfiction work, Zen of the Dead: The Grateful Dead and the American Pursuit of Enlightenment will be published by Oxford University Press.

The Generalist is of the generation who grew up with Burroughs. My tiny mind was first blown by Naked Lunch and I reviewed Junky and The Wild Boys for the underground press. 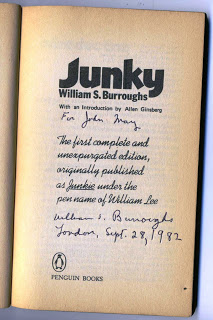 I was fortunate to interview Burroughs for the Sunday Times while having tea with him in the Chelsea Arts Club, when he was promoting The Place of Dead Roads.[See https://hqinfo.blogspot.com/2005/06/meeting-with-burroughs-at-chelsea.html]

Also was at the Final Academy event in London in 1982.

The Generalist Archive contains a respectable mini-library of Burroughs own numerous works which include collections of his letters and some important and substantial biographical material particularly Barry Miles large tome (which doesn't spare the gruesome details), Ted Morgan's Literary Outlaw and Victor Bokris' With William Burroughs: A Report from the Bunker. Rae acknowledges these sources and others which I haven't seen.

Unmentioned is the wonderful Mentored by a Madman: The William Burroughs Experiment  by A. J. Lees. A world expert on treatments for Parkinson's Disease, Lees has drawn inspiration and insight from Burrough's work in his struggle to understand this debilitating condition. [See https://hqinfo.blogspot.com/2016/05/mentored-by-madman-wiiliam-burroughs.html]

Casey Rae's book is a multi-faceted investigation of great interest which carefully and cleverly sketches out Burrough's main biographical story, his many travels and the evolution of his own work. Highly accessible for a younger audience.

The core of his investigation is, as the title suggests, an analysis of Burroughs' influence on music and musicians. A lesser writer would just have reeled off the endless string of artists who have sought audience with him.

The book is scattered throughout with names in passing along with more substantial pieces on key individuals including Kurt Cobain, Bob Dylan, Lou Reed, Jimmy Page, David Bowie and Patti Smith. In these cases he also gives us mini- bios which hold interest in their own right.

There is of course the CBGBs crowd in the Bowery coming round for supper in the Bunker: Debbie Harry, Chris Stein, Richard Hell and other punks galore -  Joe Strummer, Black Flag, Damned, Dead Kennedys et al.

Then of course there's Tom Waits (who he collaborated with), brainiacs like Brian Eno and the guys from Devo, Robert Fripp, fellow heroin addict Jerry Garcia, Philip Glass and Laurie Andersen,

Of course Genesis P.Orridge was one of his greats acolytes. He also resonated with Coil, Ministry, Thurston Moore, the Disposable Heroes of Hiphoprisy. Enough already.

To creative musicians of the '60s and 70s, Burroughs was not only an extraordinary wordsmith but he was also a pioneering explorer of  myriad substances, cults and trains of thought who somehow survived a miraculous amount of dangerous encounters on many levels.

Burroughs whole purpose was to disrupt the Control systems and spread an understanding of the other worlds and realities he spent his life dipping into or inventing. In Tangiers, he absorbed the magic of the musicians of Joujouka - which he described as a 4,000 year old rock band - along with Brian Jones and Ornette Coleman and worked on what became his seminal work 'Naked Lunch'.

All the above is of great interest but Casey Rae is a deep diver whose thesis is that Burroughs ideas, concepts, attitudes and imagination have, like a virus, infected not only rock 'n' roll but many other genres of music as well.

This is because Burroughs and Brion Gysin were the inventors and originators of cut-ups in words, sounds and images. Burroughs and his young lover Ian Somerville explored sonic sounds using equipment in Ringo Starr's flat in London when Paul McCartney came round. This was just before Sgt Pepper. Burroughs made it to the cover. Thus his influence stretches out to language (natch), electronics and, in fact, to our modern world.

Rae writes: 'Burroughs did not live to see the internet become the force for creative, social, economic, cultural and political disruption that it is today but he would no doubt  have recognised it for what it is : a cut-up.

'He predicted a future where minds would be literally infected by "very small units of sound and image" distributed en masse and electronically.

"What do we call it when one of these "small units" hold brief sway over our consciousness. We say it "went viral". Somewhere in space-time, the old man twists his lips into something resembling a smile'

Casey Rae has the broadband intelligence to present us with a multi-level ground-breaking work that rewards careful study It was Burroughs who said 'The time has come for the line between literature and science, a purely arbitrary line, to be erased'. Rae's insightful investigations reveal a whole new understanding of the one of the 20th century's greatest literary pioneers. A stone cold classic.