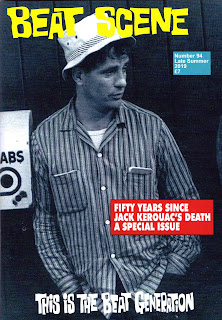 The Generalist blog is riddled with stories about the Beats, who have been an inspiration to me since I was a teenager. I have accrued a substantial library of books, records, videos, posters and Beat memorabilia but my collection, knowledge and understanding is nothing to compare with Kevin Ring's dedication to the Beat Cause. He started producing his magazine 'Beat Scene' in 1988 and it's still riding high and never fails to be interesting. This is a summer 2019 issue, published to mark the 50th anniversary of Kerouac's death.

Kevin also publishes a substantial series of chapbooks [named  for street literature in the 18th century], limited numbered editions. He was kind enough to send me two gems. The first dates from May 2008 and the Pocket Book series. 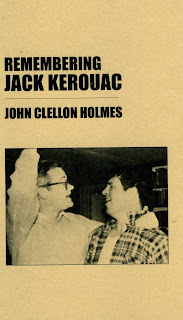 'Go' by John Clellon Holmes, first published in 1952 is considered the first Beat novel. I loved it. Holmes and Kerouac met at a party when they were both young. 'Remembering Jack Kerouac' is a little gem, consisting of two lengthy letters, written to Jay Walsh (publisher of a Jack Kerouac newsletter in New York). Two of many. Walsh wanted to know more about Kerouac and Holmes responded with a stream of letters most of which have been long forgotten. In his short intro, Kevin says of these two letters:'Importantly they are from a man who was a longtime friend of Kerouac's who knew him as well as anybody. So many works on Kerouac today are written by people who never knew him, many written by individuals born after he died. Holmes was there, his words are from the source. I love this little book. It brings Kerouac to life. 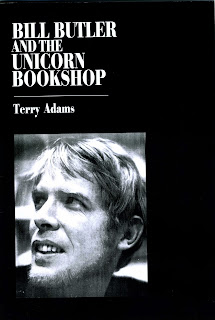 That is a wonderful aperitif to this long-awaited biography of Bill Butler and the Unicorn Bookshop in Brighton, written by Terry Adams. I have written a couple of detailed posts on Bill and his marvellous bookshop which opened in 1967.

It's where we went to print our own magazine 'Swan' on the Gestetner duplicator, to get Beat books from America, psychedelic posters and to chat with Bill and Mike, one of the first 'out' gay couples in the town.
Bill was a big guy, former US Marine, published poet, publisher and one of the drivers of the underground press and scene.

I was working at Frendz magazine in 1972 when they published a big profile of Bill which Terry refers to. This book is the first substantial biographical profile since.

Bill was a truly great guy who died too young. One of his great mottoes was 'Move The Word'. That's still what it's all about.

There has been a gradual revival of interest in Bill and the shop. The original shop was painted with a mural by John Upton and was repainted a while back, I was asked to give an opening talk.

I knew Terry had been to the shop in the old days and found out he was also a collector of Unicorn material, including many posters. This book had a very long gestation period and has been a labour of love. Its a run of 125 numbered copies.

Terry sent me an email: 'Knew I'd never be able to do a "Chapter one...Bill was born etc, Chapter two etc etc"...type thing. So just started at a point of interest to me and let it flow(ish). Probably a bit like an evening in the pub telling my favourite Bill / Unicorn anecdotes. I enjoyed doing it over a 10 day period last time I spoke to you, and I guess that's the main thing...plus I have packed a lot in, which is good to get out there.'

Bill was hounded by the police. Terry takes us through the raids and the trials. He gives us a sense of the times, the atmosphere of intimidation. Bill's piratical publishing included work by Kerouac and Dylan, Ballard and Burroughs.This book gives a good feeling of the underground days in Brighton. Could be useful in these virus-ridden times.
Stay cool. 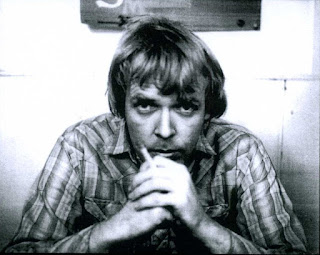 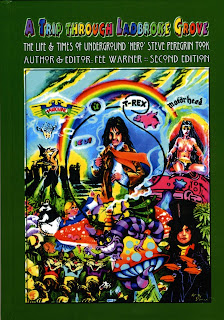 My last post was about Hawkwind and the Ladbroke Grove scene so it's appropriate to thank Fee Warner for sending me  a copy of this tribute to Steve Peregrine Took, one half of the original Tyrannosaurus Rex.

Called 'A Trip Through Ladbroke Grove' The Life and Times of an Underground Hero. Dedicated to the people who loved him, lived with him, worked with him and put up with him.'

I always remember him  with fondness. He was certainly a handful. I once got stuck in a lift with him and Tony Secunda. That's another story. .

It would be fair to say this is not a conventional biography. The layouts are lively all-over-the-place collages of info, photos, drawings, using different coloured inks and typefaces. Why not! It was all a bit crazy back then.

I think it's also fair to say that Fee is on Took's side and feels he hasn't had enough of the limelight. I certainly have enjoyed dipping into this extensive catalogue of incidents from what you could call a colourful life. One of the things she highlights is Took's musical abilities. Turns out he was an accomplished multi-instrumentalist. It is not unusual in the music business to come across highly-talented people who tend to overdo things a bit or a lot. You had to be tough to survive the touring schedules and conditions of the time.

This second edition is revised and no doubt further corrections may be in order (or out of order). My contribution is the Crow cartoon on p58. Not by Barney B but by Edward (Barker). Crows were one off his main signature animals along with curly haired men (vaguely resembling Mick Farren) who looked as if they pissed and out of their heads. I enjoyed making another trip through the Grove in my mind. It's now in the Archive. Gratefully received. 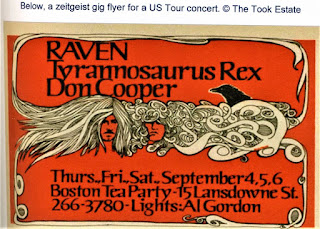