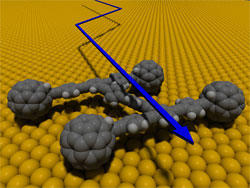 Scientists at Houston's Rice University have built the world’s first single-molecule car. This nanocar consists of a chassis and free-rotating axles made of carbon atoms linked into rigid rods. The wheels are buckyballs, spheres of pure carbon containing 60 atoms apiece. The entire car measures just 3-4 nanometers across, making it slightly wider than a strand of DNA. A human hair, by comparison, is about 80,000 nanometers in diameter. A million nanocars parked bumper to tail would cover the length of a flea.

Synthesis of the nanocars produced major challenges. The Rice research group spent almost eight years perfecting the techniques used to make them. Much of the delay involved finding a way to attach the buckyball wheels without destroying the rest of the car. Palladium was used as a catalyst in the formation of the axle and chassis, and buckyballs had a tendency to shut down the palladium reactions, so finding the right method to attach the wheels involved a great deal of trial and error.

According to Prof. Tour: 'The synthesis and testing of nanocars and other molecular machines is providing critical insight in our investigations of bottom-up molecular manufacturing. We'd eventually like to move objects and do work in a controlled fashion on the molecular scale, and these vehicles are great test beds for that. They're helping us learn the ground rules."

Other research groups have created nanoscale objects that are shaped like automobiles, but study co-author Kevin F. Kelly, assistant professor of electrical and computer engineering, said Rice's vehicle is the first that actually functions like a car, rolling on four wheels in a direction perpendicular to its axles.

'It's fairly easy to build nanoscale objects that slide around on a surface,' Kelly said. 'Proving that we were rolling - not slipping and sliding - was one of the most difficult parts of this project.'

The researchers used the fine tip of a scanning tunnelling microscope to attract the nanocar and pull it along over a flat gold surface. Their studies confirmed that the C60 molecules revolved perfectly on their axles and that car moved forward in a purposeful manner.

The group have also built a nanotruck that can transport molecular cargo as well as a light-driven motorized nanocar. 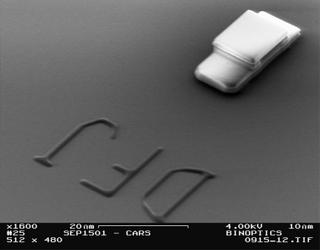 Fiend out more about this spoof nanocar at: www.dfj.com/nanocar

In a related story, engineers at the BMW Group are examining the use of nanotechnology in future cars to develop scratch-free windscreens, rear-view mirrors that darken automatically in response to light incidence, sensors for the analysis of driving conditions, moreefficient pollution filters. More details here.